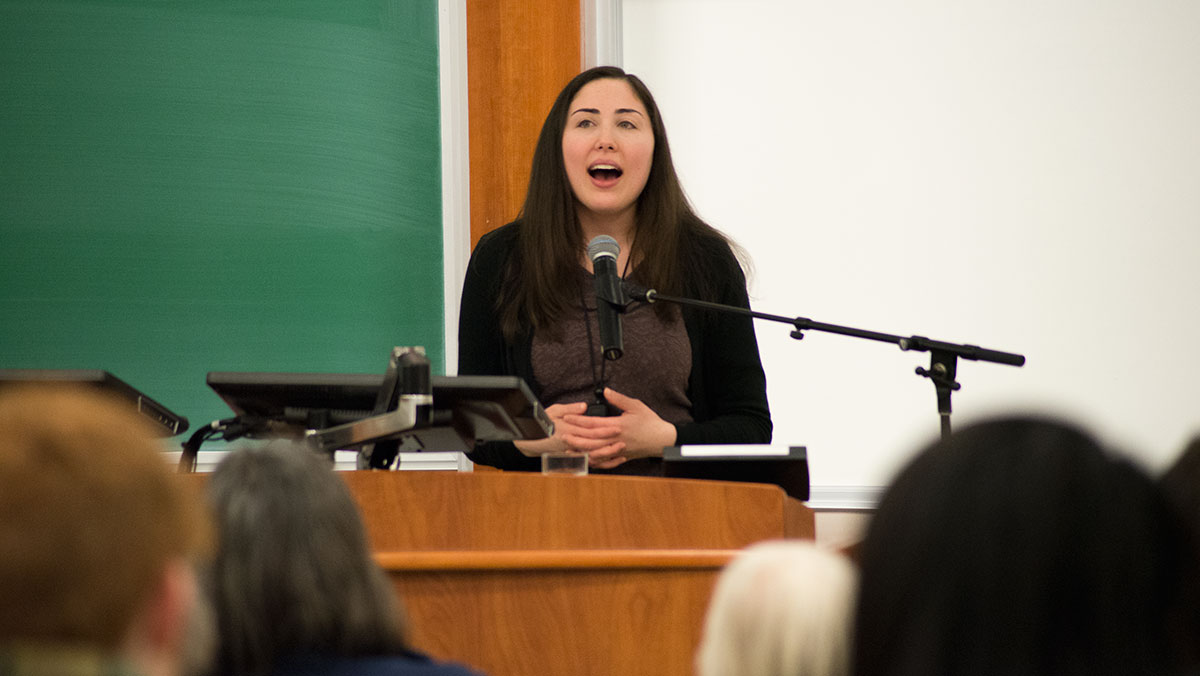 Tommy Battistelli/The Ithacan
Maya Schenwar, author of "Locked Down, Locked Out: Why Prison Doesn't Work and How We Can Do Better" and editor-in-chief of Truthout, visited Ithaca College on Dec. 9 to discuss her book and prison culture.
By Yane Ahn — Contributing Writer
Published: December 10, 2014

Author Maya Schenwar visited Ithaca College on Dec. 9 to discuss the challenges of independent journalism as well as the topics raised in her book, “Locked Down, Locked Out: Why Prison Doesn’t Work and How We Can Do Better.”

Schenwar, editor-in-chief of Truthout, an independent social justice news website, has written about the need for reform in criminal justice in The New York Times and The Guardian, according to her website.

Contributing Writer Yane An spoke with Schenwar about her book, the importance of learning about prison cells and how real people are impacted by the faults of the prison system.

Yane An: How did you first get started researching and writing about prisons and the prison system?

Maya Schenwar: Well, the thing that really drew me in was that nine years ago, my sister went to juvenile detention and over the past nine years, she’s been in and out of jail and prison. And so, I had already been assigned a couple of stories on the criminal justice system but this is why I started caring about it.

YA: What were your main goals in having your book, “Locked Down, Locked Out,” published?

MS: I’ve been writing about the system in … very specific ways through articles, and my goal with writing a larger book was kind of covering more terrain and bringing lots of ideas together, so the overall premise is pretty sweeping. Prison affects families and communities and all these people beyond the walls of the prison itself. And it also is about ways we can come together and have all these involved parties actually working towards justice instead of being painfully impacted by prison.

YA: With protests erupting after the decisions on the Michael Brown and Eric Garner cases, how is police brutality related to criminal justice reform?

MS: I’ve been doing a lot of interviews lately, and one thing I keep pointing to is that it’s all part of a larger system. The criminal justice system is grounded in racism and anti-black violence, and that’s something that violence plays out in very literal terms, like through police violence. It also plays out through the violence of the prison system because obviously black people are hugely disproportionately incarcerated, and that’s violence in itself. If they’re not killing people, they’re the start of a cycle that primarily targets poor people of color, and so, I think making those links is really crucial. If you’re gonna talk about prison, you have to some extent talk about policing.

YA: In your opinion, is there any scenario where prison is ultimately justified?

MS: I don’t think it could be said to work. I think some people experience miracles. There are some people for whom they go to prison and they’re able to discover something about themselves or make some progress in some way, but often that’s coming from them. It’s a product of their particular circumstances, so I think that, as a whole, the structure doesn’t work and it’s something we need to move past, but that doesn’t mean for individual people every once in a while there’s something good that comes of it.

YA: What do you hope readers will take away from your book and presentation?

MS: I think that what I hope they take away is kind of a little bit more understanding of how prison has impact beyond the statistics. There has been a lot more attention on this issue lately, especially over the last two years, which is a surprise to me. What has gotten very publicized [is that] there are these vast numbers of people in prison, and the United States has more people incarcerated than any other countries in the world. All of that’s really important, but sometimes it kind of obscures the fact that real people are impacted beyond the walls of prison. What I’m hoping to communicate through the book is that prison has this very real and lasting impact on people, and so it’s not just the question of incarceration, [but] it’s also a question of, “Look at all the pieces of humanity that are being chipped away as a result of this system.”

YA: Why do you think it is important to learn about and have a better understanding for the prison system and prison culture?

MS: Well I think it touches everyone in various ways, and obviously now with so many people incarcerated a lot more people know someone behind bars. There’s 2.4 million people who are incarcerated in this country, but there is also more than an additional 4 million people who are in the correctional system in some way, so like probation or parole community corrections so those things are very, very closely tied to prison. And then families in communities of people in prison are impacted economically. They’re impacted because children are uprooted from their homes. There are all these ways that incarceration very directly impacts people. But even if you’re a person who doesn’t know anyone in prison, who doesn’t have any connection to it and you think that it’s good, you’re still impacted by prison because you’re impacted by this idea of public safety.