Professor and students collaborate at NASA 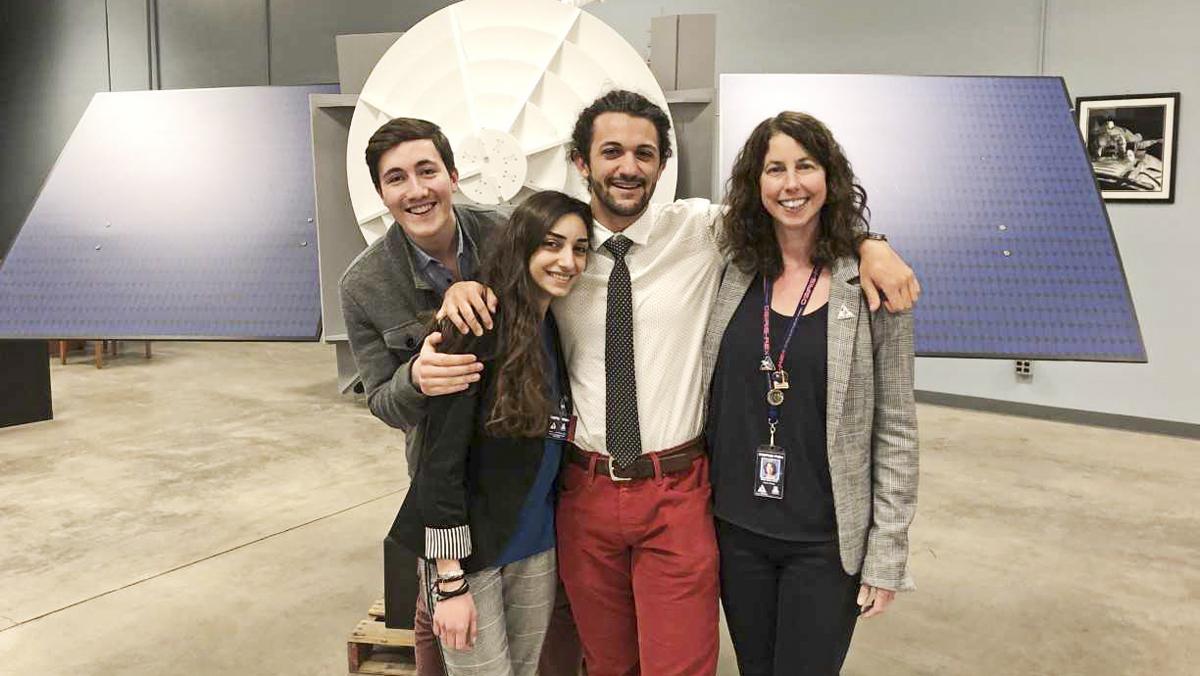 In 2009, Beth Ellen Clark Joseph, professor in the Department of Physics and Astronomy, was invited to participate in one of NASA’s missions. Now, a decade later, three Ithaca College students are also involved along with her to work with on one of the space organization’s newest missions.

Three students at the college have worked closely with Clark and the mission over the past couple of years, both on campus and in Tucson, Arizona. Salvatore Ferrone ’18 was hired by NASA after he worked closely with Clark on spectral mapping techniques. Junior Robert Melikyan will be working with NASA this summer investigating pieces of the asteroid that have been blown off. Junior Stavrini Tsangari worked with Clark on the spectroscopy of asteroids and meteorites. Clark invited students to work on the mission because the research they were working on at the college related to areas that were beneficial to the mission.

Clark has been involved in the mission since 2009 when it was in its early stages. She has worked on other asteroid missions with NASA before.

Clark said the most exciting part of the mission for her is its current stage. She said the mission is at its most critical point, as the team is approaching the deadline to pick the spot where the asteroid sample will be collected. She said she is grateful that her students are able to experience the mission.

“The mission has so many phases that take years and years, but the close proximity phase is right now, … and we have a deadline to choose a site where we will gather our sample … in early July,” Clark said. “The fact that my students get to be involved in that is very exciting for me and for them.”

Clark said Ferrone has worked closely with her on spectral mapping techniques, which involves mapping the chemical surface and composition of an asteroid, as an undergraduate student since Spring 2017. In Fall 2017, he focused his senior thesis on determining what the best spectral mapping process would be for the mission, and he worked with Clark.

Ferrone was officially hired by NASA following a recommendation from Clark and currently works as part of the spectral mapping team, working to find what the best places to gather samples from the asteroid’s surface would be.

Ferrone said the most exciting part of the mission is seeing everything that he has studied finally become real.

“This has kind of been an awaited … thing for me over the past year and a half, and now, we’re getting this real data, and I get to see from my study how much is coming through,” Ferrone said. “I get to see new and exciting things, and talking with all of the other scientists about the results is really exciting.”

Melikyan will also join Clark and Ferrone this summer in Tucson, Arizona.

Melikyan said that by the time the class of 2022 graduates, the findings of the mission will be made public. He wants to keep the hype of the mission alive so that students can see that space exploration is relevant to the Ithaca community.

“I look around when I’m walking on campus, and I see all these people with NASA sweatshirts and NASA paraphernalia,” Melikyan said. “I find it so funny that there’s so many people fascinated with space, and I think it would make them all proud to know that we are doing that here at Ithaca.”

He has presented the research on the mission at the college’s James J. Whalen Academic Symposium and at a conference in Boston. He was then invited to work on the mission this summer with Clark to investigate a specific phenomenon that was recently discovered on the asteroid. Melikyan said the phenomenon involves pieces of the asteroid’s surface that are being blown off. The team he will be working with will investigate the impacts of these pieces on the mission’s spacecraft and whether these pieces have already landed on Earth.

Clark said she hopes her students see that what they are learning in their physics classes is being used in a real-world setting. She also hopes that her students are able to understand the way in which a spacecraft mission works.