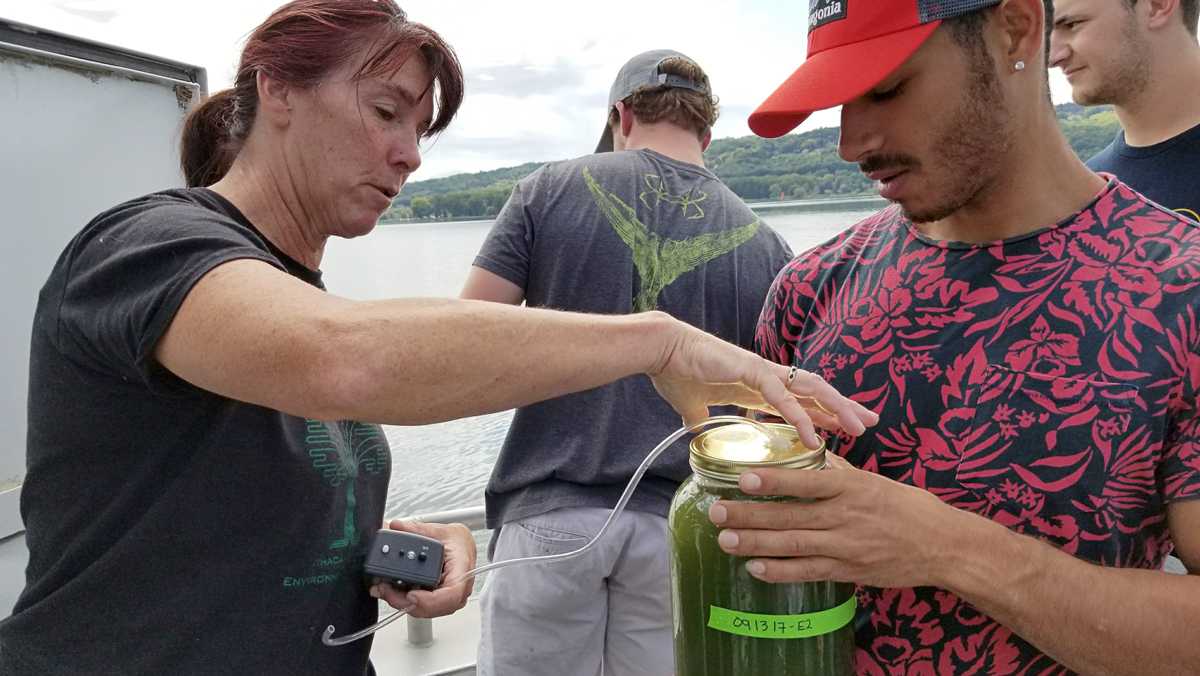 Courtesy of Susan Allen-Gil
From left, Susan Allen-Gil, professor in the Department of Environmental Studies and Sciences, and Trevor Strother ’18 conduct research on microplastics in Cayuga Lake. The research will be used in a plastic bag ban proposal for Tompkins County.
By Alex Hartzog — Contributing Writer
Published: December 4, 2018

The Tompkins County Legislature will be receiving a proposal — supported by Ithaca College student and professor research — in early 2019 to ban all single-use plastic bags in the county.

This ban will be proposed by the Tompkins County Waste Reduction Committee, of which Susan Allen-Gil, professor in the Department of Environmental Studies and Sciences, is a member. While work on the legislature of the ban has been halted while it is reviewed by a team led by a Tompkins County administrator, Allen-Gil and her team hope to continue their work in April after a six–to–eight–month hold period is over. Following this holding period, the proposal will be given to the Tompkins County Legislature in the first half of 2019.

Currently, Tompkins County administrators and attorneys want six months to review Allen-Gil’s team’s toxicology research on Cayuga Lake; to figure out how to word the resolution; and to conduct shareholder meetings with retailers, legislators and the Environmental Management Council, the official citizen advisory board on local environmental issues in Tompkins County, Allen-Gil said. Once a verdict has been given, Allen-Gil’s team will be able to continue pursuing getting the ban proposed and passed in Tompkins County.

Efforts to make shopkeepers comply with the ban will fall on the Tompkins County government, and at this stage, the county is deciding on which entity should enforce the ban, as multiple departments could be held responsible for the enforcement, Allen-Gil said. She said if the ban is enacted, there will be a six-month grace period where stores may begin transitioning to more sustainable bagging options such as reusable bags.

Allen-Gil is also assisted by three students at the college: juniors Anna Bornstein and Julia Keene and sophomore Sophie Becraft. The students are helping to conduct an electronic survey to assess public support for the ban, as well as educational outreach about the ban. As of Nov. 28, the survey has been taken by over 1000 residents, Becraft said.

In April, the Tompkins County Legislature voted 10–2 in support of a statewide ban on single-use plastic bags. This decision demonstrates Tompkins County’s support for a plastic bag ban, but the ban was never enacted, as it was decided that the motion should be given at the state level.

The three students are receiving research credit for their part in helping Allen-Gil with the ban. Keene worked over the summer to collect microplastic samples from Cayuga Lake, which would be left from items such as plastic bags, Bornstein said. Microplastics are small pieces of plastic less than 5 millimeters in size.

The results of that research were then put into pamphlets that the students passed around to members of the community to make them more aware about the harm plastic bags can do to the environment.

A primary aspect of Allen-Gil’s team’s research centered around the effect of plastic bag bans in other cities, counties and states in the United States. Also included was Keene’s research conducted with Allen-Gil on the microplastic concentration in Cayuga Lake. These microplastics severely damage marine organisms like daphnia, commonly known as water fleas, Keene said. However, no known side effects of microplastics on humans have been proven, Keene said.

Research also shows that the microplastics are seeping into drinking water across the country and even into our bottled water, Jennifer Caddick, vice president of communications and engagement for the Alliance for the Great Lakes, said.

Allen-Gil said the success of other areas in New York that have put plastic bag bans in place makes her hopeful that Tompkins County will be able to successfully implement a ban as well, especially because those involved in the project are committed to being mindful and intentional.

“We think that Tompkins County is a prime area for this kind of legislation,” Allen-Gil said. “There are other counties in New York and many across the country that have already implemented single-use plastic bag bans. So it seems like Tompkins County is a good place to do it, and we’re just trying to make sure we get it right.”

In the village of Patchogue, New York, the local government allowed a 15-month grace period for local merchants to use the last of their single-use plastic bags after passing a plastic bag ban, Patchogue trustee member Joseph Keyes said. The merchants in the village moved over to using bags that were deemed acceptable under the ban. Keyes said few local businesses had complaints about the ban, and those that did were assisted in the transition.

If the plastic bag ban is passed in the county, the burden of purchasing reusable bags or paying a fee for single-use paper bags may fall on consumers who struggle financially.

“We want to make it as easy on the elderly, or on low-income people, as we can,” Allen-Gil said. “And one of the ways we are looking to do that is — we have some funding that’s somewhat secured and we’re looking for some more funding — to be able to give out reusable plastic bag at some venues that would help the elderly or the low-income sectors of the economy.”

Many shops on The Commons already do not use plastic bags. The Finger Lakes Running Company, Jimmy John’s and One World Market only use reusable paper bags, sales associates from each store said.

“I would imagine that [the tax] would drive the price up,” Moon said. “That would be my guess. I imagine [the customers] would ask us why, but I can’t guarantee that’s what they’d do.”

However, other stores on The Commons, like Trader K’s, reuses plastic bags from other stores, said sales associate Leah DeFusco. Coye said the store refills the bins of plastic bags every two weeks from third-party sources such as GrubHub, which the store then repurposes for its own customers.

DeFusco noted that the majority of customers use single-use plastic bags, but that the clientele will probably adapt to the potential ban better than the company, as individuals are more likely to bring reusable bags. DeFusco said she does not know how the company will adjust if the ban is implemented.

Juliann LeBlanc, a shopper on The Commons, was given her leftovers in a plastic bag while eating out and said she hates when restaurants give her plastic bags and would support a plastic bag ban.

“I try to bring reusable bags, but I think [the plastic bag ban is] a really good law for them to pass,” LeBlanc said. “I hate when people give me things that can’t really be recycled that I then don’t know what to do with.”