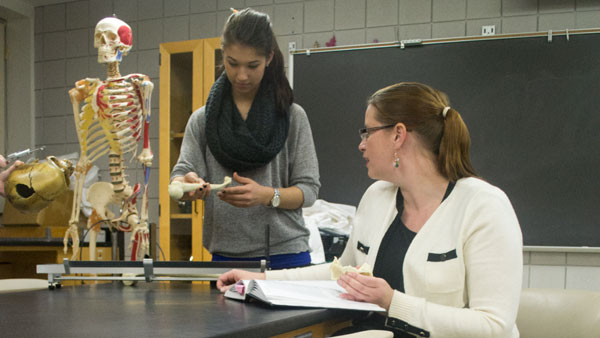 Jennifer Muller, assistant professor in the Department of Anthropology, and seniors Marcy Weber and Page Plocic, who both study anthropology, conducted research this summer on how the skeletal remains of impoverished African-Americans living in the post-slavery era reveal the trauma and diseases they endured while alive.

Muller began research on the William Montague Cobb Skeletal Collection, the third-largest collection of modern human bones in the United States, in 2002 as her graduate dissertation while studying at the University at Buffalo. Howard University, a predominantly African-American institution where the collection is kept, funded Muller’s research and the re-inventory of the collection, a routine process of confirming the condition of the skeletons.

Cobb began collecting skeletons of people, the majority of whom were poor African-Americans, who had died in Washington, D.C., between 1932 and 1969. Muller pointed out that some of the people in the collection were born in 1861, during the last few years of institutionalized slavery in the U.S. Some skeletons also belonged to poor Caucasian- and Asian-Americans.

Cobb was the first African-American biological anthropologist to earn a Ph.D., which he received from Howard University in 1932. Not until after 1950 would another African-American man earn a Ph.D. in anthropology. Muller said Cobb believed he could speak out about the injustices African-Americans faced by researching the real effects poverty had on people’s health and quality of life as evident in their bones.

Whereas wealthier Americans were able to obtain medical treatment for physical injuries, nutritional diseases and chronic illnesses, many people living in impoverished communities during the post-slavery era in the United States could not afford to receive proper treatment. Muller said the correlation of economic inequality and racial discrimination cannot be ignored.

“We were dealing with a period in American history where a lot of people were very poor but still were not getting any help from the government,” Muller said. “The medical knowledge was present … but we know from testimonials and narratives and newspapers that there was a mistrust of the white medical community.”

According to her research, Muller said, more than half of the subjects had cranial damage, especially to the nasal passage, because of violent encounters. Many of the injuries were from menial labor, accidents and violence.

“Still today, you hear people say … ‘poor people are lazy,’” Muller said. “But obviously, these people worked extremely hard throughout their lifetimes and endured a great deal of suffering to support their families.”

Howard University also offered Muller the opportunity to become co-curator of the collection. She said she was interested in studying bone trauma to see the effect poverty has on people’s health and access to treatment. Muller worked with Rachel Watkins, associate professor of American University’s Department of Anthropology and the other co-curator of the collection, to use the historic records in conjunction with the skeletal data to determine where the subjects had lived and moved while alive.

Weber and Plocic joined Muller last summer to visit Washington, D.C., and conduct research as part of internships. Muller said they were instrumental in the re-inventory and research processes.

Like Muller, the two students conducted more specific research while doing inventory. Weber analyzed evidence of nutritional diseases and Plocic studied a deformation of the frontal portion of the skull called hyperostosis frontalis interna, which is common in postmenopausal women.

Weber investigated nutritional diseases that could last a person’s lifetime, such as rickets, scurvy and anemia. Another disease she researched is linear enamel hypoplasia, which causes lines to appear on one’s adult teeth before losing baby teeth.

“You can time [LEH] well because your teeth erupt at very specific times, so you can say within less than a year when the [traumatic] event happened,” Weber said. “The lines develop because of nutritional deficiency or [psychological] stress in your childhood.”

Plocic said she will never forget examining a woman whose arm, legs and pelvis had been shattered at several points and had not healed properly, yet still walked around in this condition for the remainder of her life.

“The amount of pain she had gone through walking on legs that were broken in three or four different spots … I can’t even imagine going to work every day like that,” Plocic said.

Muller said she will be collaborating with Ali Erkan, associate professor in the Department of Computer Science, to compile the data from the skeletal analysis and historic records into a more understandable format that visually shows the movement of the people during their lives as well as their trauma. But until Muller obtains approval from the collection advisory board, she said she is not at liberty to discuss details of this project.

Muller said she often had to balance her objectivity as a scientist with an irresistible sense of compassion for the people whose skeletons she was studying.

“It forces you to be more humanitarian and really examine these bones as representing an individual’s life,” she said. “The traumas are healed, but the functional expense, the emotional expense of going through these types of diseases and injuries had to be absolutely profound.”