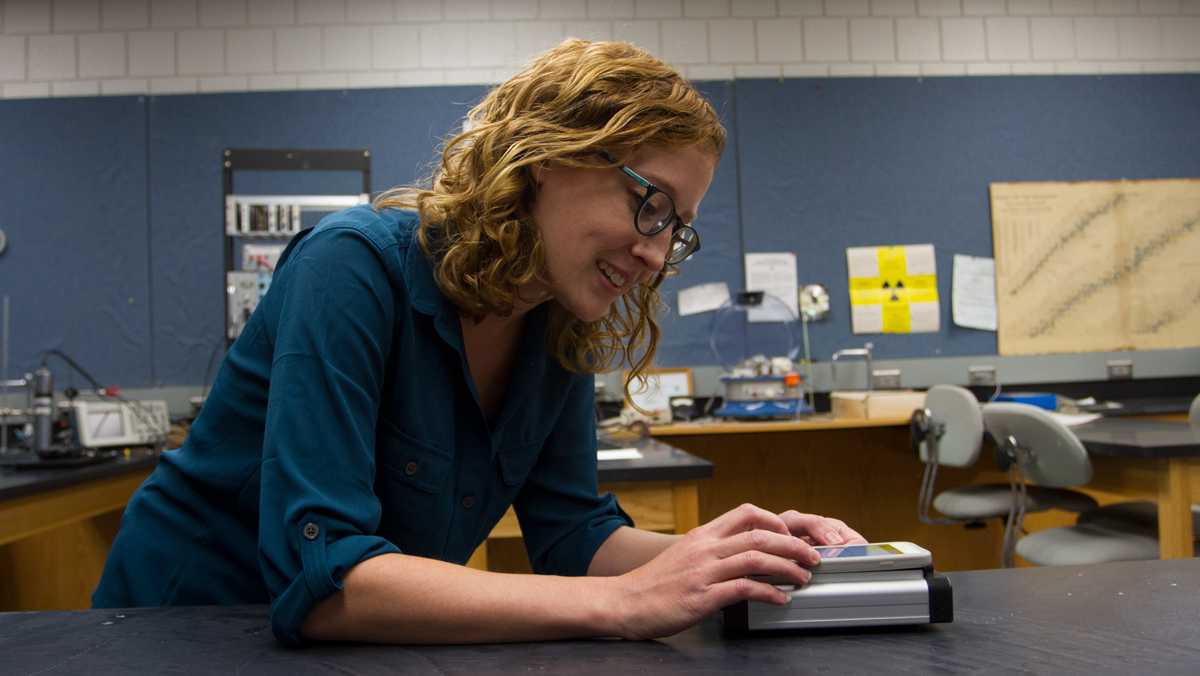 Elias Olsen/The Ithacan
Colleen Countryman, assistant professor in the Department of Physics and Astronomy, was a member of the team from North Carolina State University, her alma mater and former place of employment, that won the 2017 Campus Technology Impact Award for Teaching and Learning for the NCSU MyTech app.
By Madison Fernandez — Staff Writer
Published: November 14, 2017

An Ithaca College professor has won an award for developing an app that integrates technology and physics to make science more accessible for students.

Colleen Countryman, assistant professor in the Department of Physics and Astronomy, was a member of the team from North Carolina State University, her alma mater and former place of employment, that won the 2017 Campus Technology Impact Award for Teaching and Learning for the NCSU MyTech app. The annual award is given to campuses that make educational impacts with technology, according to the Campus Technology website.

The MyTech app is used as a data collection tool, primarily in physics laboratories, according to the app’s website. In addition to collecting data, the app allows students to further analyze the data by exporting the information to a spreadsheet format. MyTech currently has over 5,000 users, Countryman said. The app is free to use and is available for Android and iOS devices.

Countryman said although there are similar apps on the market, the aim of MyTech is to demonstrate real-life applications to physics. For instance, she said, some of her students have used the app on park swings and in traffic circles to collect data.

She said that she first came up with the idea for the MyTech app in 2013 while working as a teaching assistant at North Carolina State University after she received an internal grant from the university.

“I really felt a need for using students’ own technologies,” she said. “I felt it could better serve them, so we wanted to see if that was the case.”

Countryman said labs are traditionally equipped with purpose-built lab technologies that are often foreign to students, which leads to the time-consuming task of teaching students how to use the equipment rather than teaching core physics concepts.

Additionally, these traditional pieces of equipment have to be purchased from educational manufacturers, which are often expensive. According to the MyTech website, in a traditional lab at NCSU, the price for setup and data collection can cost approximately $21,000 per lab. These prices are compared to a cost of $5,000 per lab for setup with the MyTech app and no cost for the data collection, since most students already have a smartphone.

Countryman said it is rare to encounter a student who does not have a smartphone. However, if this situation arises, the student can still participate because the app allows three students to use one smartphone.

A benefit of the app is that students can take parts of lab equipment home with them and do lab experiments outside of the classroom, Countryman said. She said the MyTech app uses the phone’s internal sensors to collect data about the motion of the device. Now in her first year at Ithaca College, Countryman uses MyTech in the labs she teaches to facilitate conversations about acceleration and forces, she said.

Sophomore Christine King, a student in Physics 101, said using the app in her acceleration lab helped her understand scientific concepts, such as free fall equations, in a more accessible way.

“I think what students really appreciated about the app was that we got to apply concepts that we learned in the class to real-life situations,” King said. “Physics can be daunting. Just the fact that we could apply that to something we really connected to, because cell phones are something that we really all are very knowledgeable about.

King also said the app was easy to use and allowed students to easily test different situations in the lab.

Senior Jonah Levy, another student in the class, said the app helped him visualize the measurements he took of the movement of his hand, which he said was an enjoyable experience overall.

“It helped teach you about the topic, but also shows you how the phone functions,” Levy said. “We all have them, and we don’t actually know how they work really, so it was cool to see that.”

Countryman said she has given some presentations to the physics department regarding the app, and that some professors are planning to use it in their upcoming classes.

Michael Paesler, a former physics professor at NCSU, was Countryman’s former teacher and an adviser during the development of the app. He said although he guided the project, Countryman took much of the initiative to advance her initial vision.

“She was the driving force for this project,” Paesler said.

Paesler said that as more people began to use MyTech, the team was able to figure out how to enhance the app. He said the improvements included bettering the graphics to make it clear why the app was reading the measurements how it was.

Paesler said he thinks the app has been incredibly successful and that it is one of the friendliest technological advances for students in science.

Countryman said she is working on implementing more analytical tools into graphing previews in future updates. She said the MyTech app is one of the few apps that graphs the data for students after being collected, and that she wants to make it easier for students to find specific points in the graph to analyze and manipulate.

Countryman said the response to the app has been positive overall. Although the app is aimed at college-age students, Countryman said, fifth graders had a positive reaction to testing the app.

“When you’re staring at a textbook or the blackboard for too long, not only do you lose interest, but you fail to grasp the concepts,” King said. “Using something fun like technology was definitely engaging for us as students.”