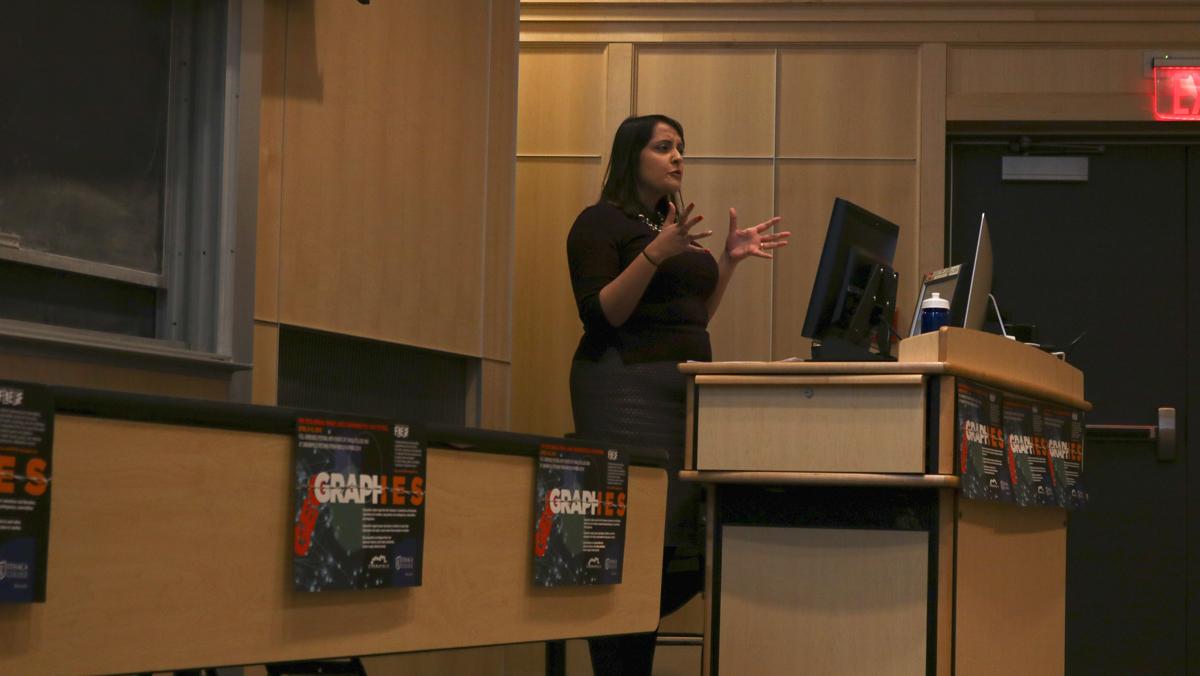 Sheila Vakharia, assistant professor from Long Island University Brooklyn, discussed the complexities of the opioid crisis April 9 as part of the opening ceremonies for the Finger Lakes Environmental Film Festival, a yearly event hosted by the Ithaca community.

Vakharia has an extensive background studying the topic of drug addiction and societal responses to the issue. Her recent work specializes in ethical treatments of substance use, drug user stigma, overdose prevention, drug policy and the disease construction of addiction. Approximately 60 to 70 people attended the event.

The United States has been suffering through an opioid crisis since the 1990s, and it is getting worse. According to the National Institute on Drug Abuse, approximately 115 people die from opioid overdoses every day. The number of overdoses increased 30 percent from July 2016 to September 2017 in 52 areas of 45 states and has increased in large cities in 16 states by 54 percent.

The Ithaca community is no exception to these statistics. According to the 2017 New York State Opioid Quarterly Report, 16 people in 2016 in Tompkins County died because of an opioid overdose.

Vakharia began her presentation by defining the harm–reduction philosophy as a set of pragmatic approaches that aim to improve a person’s quality of life. She also explained what she calls the drug, set and setting model. This model explains how it is not just the drug itself that affects whether or not a person becomes addicted. Factors such as a person’s predisposition to certain health conditions, like anxiety and depression, and where and with whom they take the drug determine addiction.

Vakharia then argued that the language people use when talking about drug addiction can have a significant impact on society’s perceptions of the issue.

“How we define a problem determines a lot of different factors that are involved in raising awareness for and addressing the problem,” Vakharia said. “It decides what we recommend for solutions, what strategies we think are best to implement, how we allocate resources and tells us what to prioritize or pay attention to.”

Vakharia also mentioned statistics that break down common misconceptions about the current drug problem in the U.S., such as drug dealers coming from a minority or low-income background. Recent data has shown that most opioid misuse in the U.S. comes from prescription misuse. Additionally, people who misuse prescription opioids do not buy from a dealer — these drugs are given to them by family members or friends. Recent studies have shown that the rise of overdose deaths does not come from opioids alone, but from the mixing of fentanyl, an opioid that is 100 times more potent than heroin with other drugs.

Vakharia also argued that laws that have been put in place to address the opioid crisis only enforce racist stereotypes about drug users. For instance, when she asked the New York City Department of Health and Mental Hygiene to look into if only black people mixed fentanyl into their drugs, it was found that there was racial bias against drug users present.

“We found something really interesting pop up in their analysis,” Vakharia said. “They found that medical examiners and coroners were more likely to run screens on black bodies to check for drugs, such as cocaine, more so than on white bodies that came up in overdose deaths. This data further enforces biases people may have towards people of color, that they are the bad guys that are selling and using all of these drugs.”

Vakharia ended her presentation by explaining what kind of methods could be used to help solve the drug crisis. Some of these include providing access to supervised consumption clinics and sterile equipment, as well as giving users and their loved ones drug education and access to Naloxone, a medication designed to rapidly reverse opioid overdose in emergency situations. The establishment of supervised consumption clinics was proposed by Ithaca Mayor Svante Myrick in May 2016 and was part of a four–step plan that addresses prevention, treatment and law enforcement of illicit drugs.

“Challenge your own thoughts on drug use and drug users,” Vakharia said. “This is not about being comfortable. Access to humane, kind, loving and compassionate treatment is a basic human right.”

After the presentation, the event transitioned to a Q&A portion. Topics such as how supervised consumption clinics are established, if misusing prescription opioids can lead to misusing other illicit drugs and how the government can take care of those recovering from drug addiction were discussed.

Freshman Coltrane Herrmann said the event gave him a better perspective on the drug crisis in the U.S.

“Vakharia’s presentation was eye-opening to me,” Herrmann said. “I had no idea just how many factors can contribute to drug addiction and that so many other types of drugs have contributed to the problem.”

Freshman Jessica Tornai thought that Vakharia’s presentation was able to dispute the misconceptions people may have about the drug crisis.

“I’ve noticed that a lot of the time, the media only portrays poorer areas as places that are affected by the current drug crisis,” Tornai said. “This presentation was able to show that this is definitely not the case. These dangerous drugs do not discriminate, and it’s important that the government focuses on helping everyone, not just a certain demographic.”