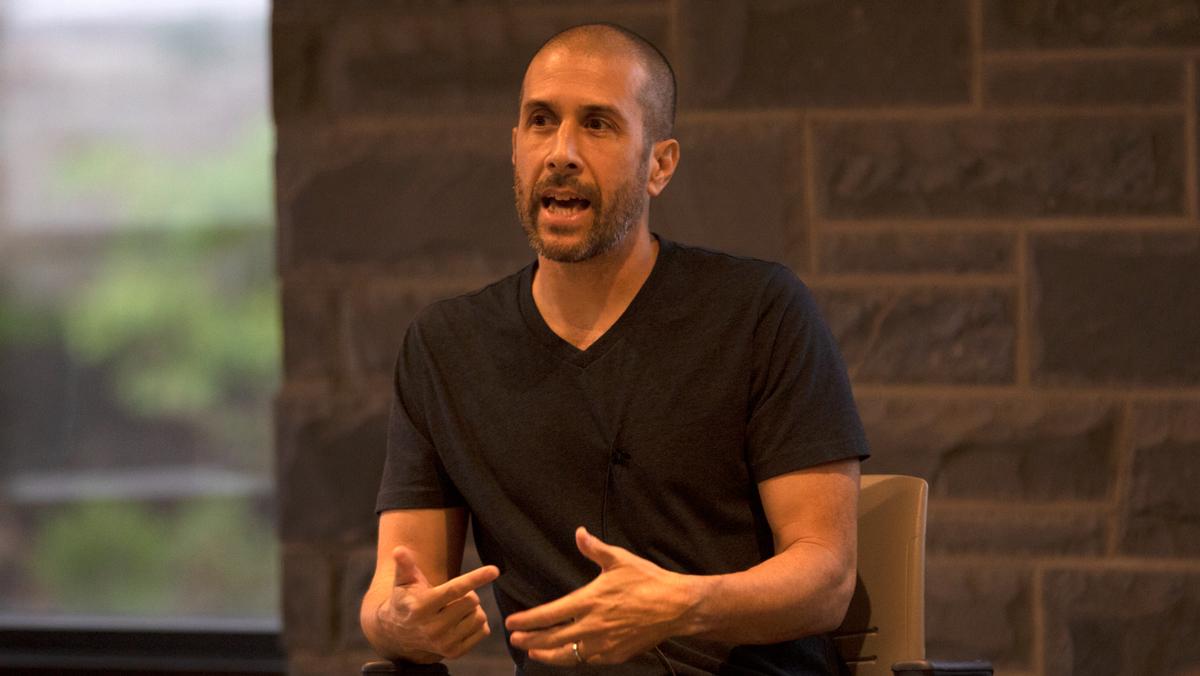 Caroline Brophy/The Ithacan
Iokepa Casumbal-Salazar, assistant professor at the Center for the Study of Culture, Race, and Ethnicity, led a discussion event “The Future, Still: Constellations of Indigenous Resurgence,” as the first installment of the CSCRE's 2018-19 discussion series.
By Alexis Manore — Staff Writer
Published: October 1, 2018

Ithaca College’s Center for the Study of Culture, Race, and Ethnicity held a discussion Sept. 26 about indigenous people in society and infringements on their land.

The event, titled “The Future, Still: Constellations of Indigenous Resurgence,” was the first installment of CSCRE’s 2018–19 discussion series, “On Native Lands: Decolonization, Solidarity and Resurgence.” It was held in Clark Lounge in the Campus Center with approximately 50 people in attendance.

Iokepa Casumbal-Salazar, assistant professor at the CSCRE, spoke with Belisa Gonzalez, associate professor and director of CSCRE, in an interview-style discussion and answered audience questions about issues indigenous people face.

Gonzalez said the purpose of the discussion series is to recognize that the United States is built on white supremacy and colonialism, and to explore each person’s role in decolonization. She also said the series would answer questions about how indigenous people are racialized, or perceived in a racial context, differently than other people of color, how other minority groups can contribute to decolonization and what kind of relationships can be forged through these commitments.

Salazar is a Kanaka Maoli — which means Native Hawaiian  — and has a Ph.D. in Indigenous Politics from the University of Hawai’i at Mānoa.

The event opened with Gonzalez and Salazar acknowledging that the college is built on land that belonged to the Cayuga and Haudenosaunee people prior to being confiscated by the U.S. government in 1779. The Haudenosaunee Confederacy is made up of the Mohawks, Oneidas, Onondagas, Cayugas and Senecas.

Salazar said the title of the series derives from the lands of indigenous people that have been confiscated throughout history.

The subtitle of the event, “Decolonization, Solidarity and Resurgence,” refers specifically to indigenous resurgence, the actions many indigenous people are taking to reclaim and preserve their cultures and heritages, Salazar said.

“The most compelling aspects of indigenous studies to me were the things native people were doing without regards to this thing called colonialism or colonization,” Salazar said. “Although it exists and continues to be a force in our lives, native people, despite popular belief, instead of receding into the wilderness or vanishing or being all lost and therefore not being relevant in today’s society, are doing practices that are really beautiful forms of reclamation, of language revitalization, of rebuilding traditional food systems, practicing indigenous health and medicine. And I wanted something that dealt with that concept: indigenous resurgence.”

Salazar said many indigenous people are not interested in adopting Western culture because they are in the process of reclaiming their own.

“Native people don’t necessarily want to be part of Western society,” Salazar said. “Native people had generations of brilliant, beautiful methods, and the work they’re doing now is bringing those back, revitalizing them, reclaiming them, making them new and looking towards the future.”

A student in attendance asked Salazar if he felt that Western society’s portrayal of Native Hawaiian culture, specifically the 2016 Disney film “Moana,” delegitimizes the modern aspects of indigenous culture and hurts the dialogue between Western and indigenous cultures.

“I’m of two minds when it comes to things like that, and I sort of land ultimately on the side of critique and ‘No, hands off,’” Salazar said. “Disney really draws on all the beautiful things they can grab at. The same time, they are looking at making as much money as they can for their shareholders, at the end of the day. … I have a hard time looking at content Disney is using for native people while I don’t see them actually doing anything tangible for the people.”

Salazar is working on publishing a book, “First Light: Indigenous Struggle and Astronomy on Mauna a Wakea,” which will be published in 2020 and delves into the controversy surrounding the Thirty Meter Telescope, a giant observatory being constructed on Mauna a Wakea, a mountain that holds spiritual significance to the Native Hawaiian people.

Mauna a Wakea was selected to be the location of the TMT in 2009 and construction began in 2014, but widespread protests caused the project to be put on pause. In December 2015, the Hawai’i Supreme Court pulled the TMT’s construction permit because protest groups’ petitions were not properly addressed.

Salazar said he finished his research in 2014 and talked to Hawaiians on both sides of the argument. He said many who approved of the TMT were excited for the benefits it would bring and believed there were other problems that held precedence over the telescope. On the other side of the argument, Hawaiians who were against the telescope wanted to be able to live their lives without having to worry about their sacred lands being taken away from them, Salazar said.

Sophomore Hana Cho said she went because she feels she has a close bond with CSCRE as a Martin Luther King Scholar and thinks it is important to listen to the issues discussed during the event.

“I’m an MLK Scholar, so I feel really affiliated with the CSCRE department, and the discussion series have always been pretty interesting and bring up topics that are usually looked over,” Cho said. “I thought it would be interesting to come, and it’s important to give voices to these kinds of issues.”

Senior Laura Waxman came because she is a student of Salazar and enjoys hearing his perspective on issues Native Hawaiians face.

A professor recommended attending the discussion to senior Nnebundo Obi, and she said she was glad that she took his suggestion.

“I’m a senior, and Professor Iokepa’s talk really got me to thinking about what I want to do as a sociologist in my postgraduate years, so he talked a lot of things I’m struggling with, like the legacy of colonization,” Obi said. “Not everybody is necessarily against me, and I can make relationships with people regardless of whether they look like me.”