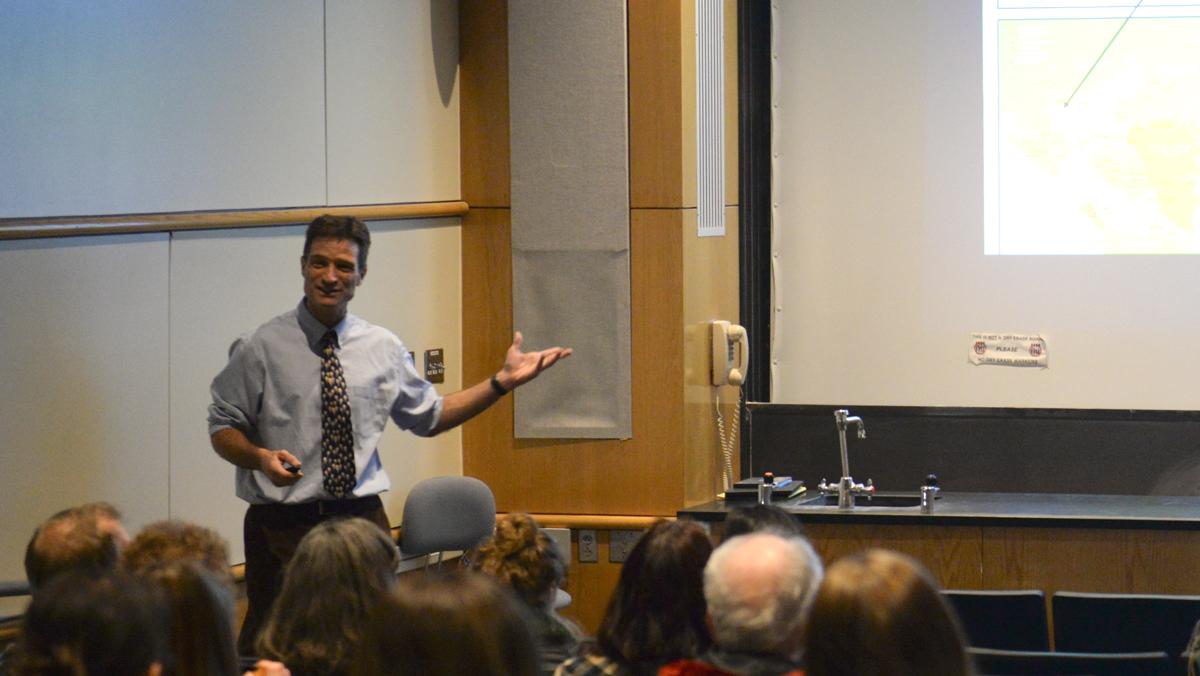 Michael Smith, associate professor in the Department of History at Ithaca College, has been interested in learning about the people of Sabana Grande, Nicaragua, since he spent his sabbatical there with his family five years ago. This semester, he has returned from a semesterlong Fulbright funded research project in Sabana Grande to share his findings.

Smith presented his research and insights on sustainable development in Nicaragua in the Center for Natural Sciences on March 28. His observational research focused on the rural community of Sabana Grande, its history and how sustainability programs in food, water and energy have evolved over the last 15 years. About 30 people attended the presentation.

“Basic things we take for granted, like running water and cooking — how do people do those tasks, and how do they change when the ability to simplify their lives through new technology comes in?” he said. “I was interested in observing that, and I wanted to know the deeper history of people’s lives 10, 20, 30 years ago.”

Smith’s research focused on both historical and environmental contexts. He conducted 41 interviews with the indigenous people of Sabana Grande, ranging from the young to the elderly. From these interviews, he found that people felt empowered by the improvement of quality of life and an improved economy, he said.

Sabana Grande is a poor area for many reasons, Smith said. It is the aftermath of a conflict zone and faces environmental stressors such as deforestation and climate change. He said many people have to migrate to surrounding areas to find work. However, through programs that pass on knowledge on how to build and use sustainable tools to the youth of the community, the unemployment rate is lowering. These programs teach people how to build and use technology such as solar panels and solar ovens.

In his presentation, Smith also noted some problems with sustainable living the community has faced. Access to engineering techniques like hand-pumped wells has allowed for fewer sustainable methods to be practiced, such as a municipal water system tapped into a well, also known as tap water.

“I’m noticing how people in this community — and we all do this, understandably — are drawn to the convenience of modern technology,” he said.

Smith said he wanted to bring his research to the college because it is important to see how people who are living more politically, environmentally and economically vulnerable lives are addressing economic and sustainability challenges. He said it can be helpful to see how people respond to and resist these challenges because it could be ultimately helpful in the lives of those who live in more privileged areas.

“This is how most of the world lives,” he said. “A story like Sabana Grande is valuable to recognize the degree to which they are kind of on the frontlines that we are removed from. But when things happen in our world, like the hurricanes, droughts and fires, we can be just as vulnerable.”

Freshman Sophie Becraft attended the event and said she felt it is important for students to see how these rural sustainability programs work because it promotes deeper thinking about one’s habits. She said it also shows how to address the issues of sustainability in a greater context.

“We can’t sit here and enjoy the lights and heating that we have and then tell them they can’t have the same opportunities,” Becraft said, “It’s really arrogant to think that we can just instill our own ideas and practices on them.”

Junior Mike Hanlon, who also attended the event, agreed that it is important to think about the greater context of sustainability. They said they felt that learning about these areas in the world and how the people there are addressing their own struggles is important to help address sustainability in the future.

“I think it’s important to learn about these communities both to be able to acknowledge the privilege that we have and also be able to listen to them and help them develop the approach that they feel is right for them,” they said.

Smith said the resilience and optimism of the people of Sabana Grande are inspiring.

Smith said that he is not sure where his research will go from here but that he is currently working on two different writing projects. He said he wants his research to be useful to the people of Sabara Grande, but there is no internet there. He is looking into taking some of the key quotes from his interviews and transcribing them onto the community building in Sabana Grande to serve as a monument to their history that they’ve shared with him.