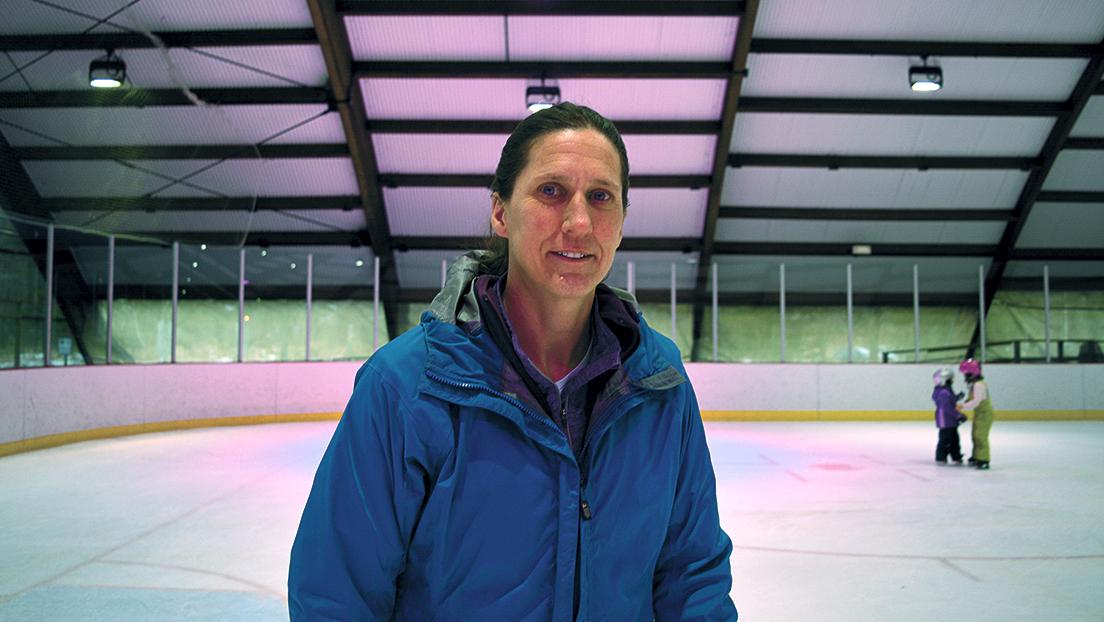 This year, athletes from around the world gathered to compete in the Winter Olympics in Pyeongchang, South Korea. During the Olympics, ice skaters such as Adam Rippon, Mirai Nagasu and others made headlines. Deborah King, professor in the Department of Exercise and Sport Sciences, studies the physics of ice skating.

King has done interviews with The Daily Beast, Smithsonian Magazine and Science Friday to discuss the science behind how ice skaters are able to complete so many revolutions in the air, and what impact ice skating has on skaters’ bodies. In the past, she has partnered with Brigham Young University in Utah and the Ithaca College Figure Skating Team to conduct her research.

Staff Writer Ryan King spoke to Deborah King about how she studies the physics of ice skating, how she became interested in the topic and her thoughts on the Olympics.

Ryan King: How did you become interested in this topic of the physics of ice skating?

Deborah King: I worked at the Olympic training center in Colorado Springs in between my masters and my PhD. … They brought in people in between their degrees [so] that you could work for one or two years. Our duties were to provide sports science for the athletes’ training center, or sometimes sports bringing camps in so that athletes weren’t at the training center, but visiting there. So the year I was there, U.S. figure skating had a sports science and medicine camp. It was a year where a lot of the male skaters were really trying to master the triple axel. It is sort of a main state jump now, but it was sort of an up-and-coming jump there, and the U.S. was really trying to catch up with the Russians … So there happened to be five male skaters at the camp who could do triple axels, and one of the coaches [wanted] some sports scientists to study the jumps and see what goes into the triple axel [to] use that information when teaching all the other skaters. It was really fun from a physics question and from the biomechanic side of things of how we were actually going to collect the data to measure these things. Because that really intrigues me.

RK: How do you study the physics of ice skating?

DK: It actually can be challenging. One of the things we try not to do is have to put a ton of equipment on the skater to measure them because we don’t want to interfere with their ability to perform the skills. And the other challenging thing can be, particularly when working with the elite or at least national–level athletes, they skate really fast and they have big jumps. And they need to use a decent amount of ice surface to build up momentum for the jump and come in on the right arc. So you can’t just say ‘have the skater jump right here — this is where the equipment is’ because that might not give them enough room on the rink to build up speed, and it might not allow them to come in with the correct approach. So you have to figure out how to use the measuring equipment and get the jumps as they do them naturally. Most of the studies I’ve done have been done with cameras. Now that technology has changed enough, you can use optical cameras where you’re not so much looking at the real video of the skater. You put filters on the camera and it’s more like motion that you would see in movies and gaming. You would put reflective markers or something on the skater to track. You wouldn’t do that in competition, but you could do that if you just went to a training rink and got the right training. So that’s what we’ve done. So we’ve essentially done some sort of motion capture technology where we’ve used cameras to capture their jumps. We reconstruct their jumps in three-dimensional space on the computer so we have the movements of their bodies in three dimensions and we measure whatever parameters we’re interested in.

RK: One of the articles mentioned that if someone used hand weights, they might be able to do a quintuple jump — a five spin jump — can you explain this?

DK: So there’s some advantages and disadvantages to the possibility of hand weights. From a pure physics or mechanics sense of it, you can use hand weights to your advantage in jumping if they’re light enough. If you have a light enough hand weight that you can still swing your arm with pretty much the same speed, but you have extra mass, that gives you extra momentum going up. And you can actually jump higher with them. Because you’ve created extra momentum, you push off the ground with a little more force, and it’s enough to make up for the extra weight you are carrying. If the weight was strapped to your chest, that wouldn’t work. It’s the fact that you can swing it up and create extra momentum. So that’s sort of an advantage. If you get too heavy, that no longer works because you can no longer swing them up at the same speed, and it’s not moving as fast so it’s just extra weight that’s weighing you down. And the same things works for rotation. If you put extra weight in your hands, you can sort of get more momentum going … So that would be a fairly light weight, probably a pound or less. So that could be an advantage in both rotation and jump height. Problems that can come up is that a skater training with them might get used to it, but the timing they approach when they take off for the jump sort of becomes ingrained and natural on a skater. They get their rhythm and their timing and that makes their jump flow. And when you give them the hand weights, that messes up their timing … The problem with figure skating is that it’s not just one skill. … With figure skating, you would have to use the weights for the whole rest of the program.

RK: One thing that got a lot of attention was Mirai Nagasu being the first American woman to complete the triple axel at the Olympics. What did you think about that? Why was it so impressive? And why do you think she was able to pull it off?

DK: So the triple axel is one of the skills that’s really hard for both the males and the ladies. People that aren’t as familiar with skating probably think it should be similar to doing some of the other triples. But the triple axel requires three and a half revolutions in the air. Most of the triples only require three. It’s just because of the way you do an axel jump. So what’s impressive is that doing a triple axel and doing three and a half revolutions is doing half a revolution more than all the other jumps that they’re doing triples in. And it’s pretty close to some of the quad jumps, in that some of the quad jumps require somewhere between three and a half to four revolutions. So it really takes someone who has already got a really high, powerful jump and can get that rotation … It is sort of on the cutting edge of ability levels for the female skaters, and there haven’t been that many who’ve ever done a triple axel before. And she did it really nicely.

After earning more medals than the men for the first time since 1998, the women of the US Olympic team deserve recognition.

Women serve as bright spot for US in underwhelming Olympics