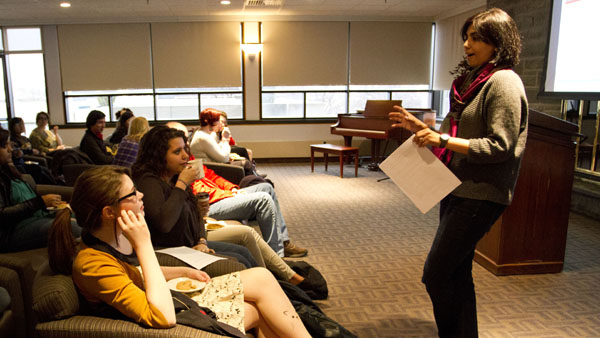 Students may be familiar with the advertised convenience of iPhones, but not as much with the inequalities surrounding iPhone production among other global commodities.

Bhavani Arabandi, assistant professor in the Department of Sociology, gave a presentation that investigated the global industries of iPhones and surrogacy clinics April 7 in the Clark Lounge. She discussed the economic and gender inequalities that can be found at every “link” in the chain of production and consumption of commodities around the world.

The process of creating an iPhone requires extracting coltan, a rare earth metal that greatly improves battery life, Arabandi said. Eighty percent of the world’s coltan reserves are in the Democratic Republic of the Congo, which continues to be in a state of civil war since 1998, even after the globally recognized end of the war in 2003. Arabandi said the militia have control of the mines, so corporations that buy coltan from the Congo are financing the war.

“Our cellphones have blood on [them],” Arabandi said. “In the context of our consumption practices, we have a direct role to play in the war in the Congo.”

Factory conditions in China are somewhat better than the coltan mines, Arabandi said, but the working and living conditions in Chinese factories owned by Foxconn, one of the leading multinational electronics manufacturing corporations, were still bad enough to cause a series of suicides by workers throughout 2010. Arabandi said the 12-hour shifts, low wages and cramped dormitories contributed to the workers’ poor psychological health.

Arabandi showed a video from 2011 in which Steve Jobs claimed the quality of Apple’s factory conditions was unmatched in terms of oversight of factory conditions. In the video, Jobs said the Foxconn suicide rate was troubling but relatively lower than the U.S. average rate of suicides.

Sophomore Gianna Boccanfuso, co-president of IC Feminists United, said the way Jobs talked about the deaths of the workers was disturbing.

“Jobs trivialized the loss of human lives by reducing the suicides to a statistic,” Boccanfuso said.

Arabandi said Jobs’ comments in the video, in which he also said Chinese factories inherently work faster than American factories, reflect a sentiment shared by many other corporations.

“Is there a different price-tag for an American life versus a Chinese life?” Arabandi asked the audience.

The other commodity chain Arabandi discussed was the industry of surrogacy, in which women are hired to give birth to children of clients. Arabandi said surrogate mothers in India are far less expensive than surrogate mothers in the U.S., and Indian clinics will often perform Caesarean sections days or even weeks prematurely to coincide with clients’ arrival in India to receive their child.

Jonathan Ablard, associate professor in the Department of History, teaches a course on the history of commodities titled “From Sugar to Oil.” The curriculum begins with studying the production and trade of Colonial-era commodities in the Americas, including cod and sugar, and later delves into modern commodity chains such as organ harvesting and human trafficking, he said.

“There’s always a human cost, even with legal commodities … that is connected to the labor and environmental cost of production,” Ablard said. “[Bananas] are 49 cents for a reason.”

Ablard said that throughout history, workers were told they have a sense of freedom in choosing the industry they work in, when in reality the larger economic situation may limit how much freedom workers can exercise.

Junior Makda Getachew, vice president of IC International Club, said the club approached Arabandi after it learned about her research. Arabandi, who is the faculty adviser for IC Feminists United, decided to combine globalization and gender issues at the lecture and suggested the two clubs collaborate, Getachew said.

“We want other students to understand how the destinies of people all around the world are intertwined,” Getachew said. “We are a small part of a huge chain.”

Getachew, who was born, raised and educated in Ethiopia before coming to the college, said her schools discussed the negative sides of globalization, often framing globalization as a cause of cultural erosion rather than part of the way societies naturally develop.

Boccanfuso said she first learned about globalization in high school and was taught about it in a mostly positive light, but her understanding broadened upon coming to the college.

“There’s a dark side to globalization that exploits race and gender and class,” Boccanfuso said.