Professor gives talk on generational trauma from the Holocaust 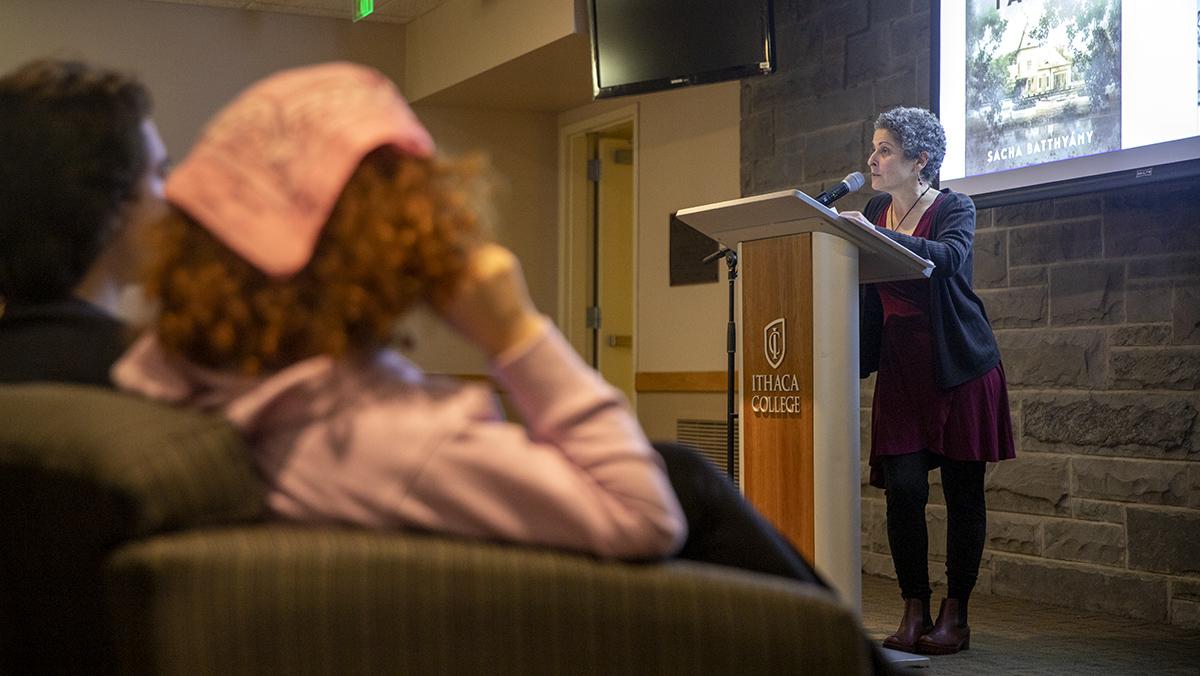 Jasmine Scriven/The Ithacan
On Sept. 20, Annette Levine, professor in the Department of World Languages, Literatures and Cultures and Jewish Studies coordinator at Ithaca College, gave a lecture in the Klingenstein Lounge in Campus Center on the impacts of generational trauma in second-generation Holocaust survivors in Argentina.
By Joshua Pantano
Published: September 21, 2022

On Sept. 20, Annette Levine, professor in the Department of World Languages, Literatures and Cultures and Jewish Studies coordinator at Ithaca College, gave a lecture in the Klingenstein Lounge in Campus Center on the impacts of generational trauma in second-generation Holocaust survivors in Argentina.

Members of Hillel at Ithaca College, students in Spanish-language courses and others interested in the topic gathered to hear Levine’s lecture “Fragile Knowledge,” where she spoke about her work interviewing and researching second-generation Holocaust survivors in Argentina and Brazil. As a second-generation survivor herself, Levine said her research led her to many important — and often personal — discoveries. While Levine said she helped other survivors uncover information about their families, including discovering unknown relatives through Holocaust databases, she also underwent many personal, emotional journeys and uncovered information about her family.

“It was very surprising,” Levine said. “I didn’t expect to be so emotionally moved the way I was while I was listening to [second-generation survivors] speak. It became clear that I hadn’t yet unpacked much of my own family history.”

Through an online Holocaust database from the United States Holocaust Memorial Museum, Levine said she accessed the names of relatives of not only the people she spoke to, but of her family as well. She said she unlocked information that could otherwise be difficult to access.

“Descendants of survivors are pulled toward knowing, as it is a space from where their core identity is spawned, and this knowing is also repellant,” Levine said. “In some cases, descendants themselves play an active role in finding out the details of their past, and in others, once–hidden facts come to them unexpectedly.”

Levine said for some second-generation survivors, the search for information can be very difficult because of the traumatic nature of the Holocaust. Generational trauma refers to trauma that affects multiple generations in a family, including those who did not experience the trauma-inducing event themselves.

Levine spoke about one of the people in her research, Aída Ender, the daughter of two Holocaust survivors. Levine said after finding a picture of Ender’s mother with a child, Ender confronted her parents about who the child was but got no answer. After talking to other people who had survived the same work camp in Siberia, Russia, as her parents, Ender discovered that the child in the photo was her brother, who died in the camp.

Levine said that uncovering familial trauma can unearth difficult emotions for first and second-generation survivors. Levine mentioned the work of Mirta Kupferminc, an artist and  second-generation survivor who discovered that her grandparents had been murdered by Nazis, although her mother believed they had committed suicide. Levine said Kupferminc used her art to express this knowledge without hurting her mother with the information.

“In order to engage with this topic, Mirta as an artist felt as if she had to create something,” Levine said. “And she struggled because anything she created would be seen by her mother, who was still alive.”

One of Kupferminc’s works, titled “Fantasmas en el Ghetto de Lodz,” Ghosts at the Lodz Ghetto, is dedicated to Daniel Kupferminc, the son of her father’s first marriage, who died during the Holocaust. The painting depicts the ghosts of those who were murdered in the Lodz Ghetto in Poland.

Residency for Human Rights and Social Justice, a residency at Gage’s former home in Ithaca dedicated to the memory of Levine’s late friend and colleague Dr. Sue-Je Lee Gage. Levine also dedicated her lecture to Gage, who was an associate professor in the Department of Anthropology at Ithaca College.

During her lecture, Levine referenced the graphic novel “Maus” by Art Spiegelman. Levine said in the book, which recollects Spiegelman’s father’s experiences in Auschwitz — the largest concentration and extermination camp of the Holocaust, located in present day Poland — Spiegelman finds himself struggling to engage with the memories of trauma that he must carry as a second-generation Holocaust survivor.

Levine said she related to his experiences because she too found it difficult to engage with her familial trauma when she was younger.

“Sometimes there are obstacles we don’t even realize,” Levine said. “I wasn’t really fully cognizant of how I was avoiding learning about my family’s truth, because I knew my parents themselves were self-shielding. I knew on a subconscious level that it wasn’t safe for them, for me, to unearth all this information.”

Senior Isaac Schneider, president of Hillel at Ithaca College, is a third-generation Holocaust survivor and said Levine’s lecture is signficiant because it emphasized the importance of engaging with topics about the Holocaust.

“I think [lectures like Levine’s] will continue to actually get more and more important as less Holocaust survivors are around,” Schneider said. “I fear that people are afraid to engage with this material because there’s not many opportunities to [talk] with living Holocaust survivors anymore, and I think we need to capitalize on that. … We’re going to lose all their stories.”

“[The lecture] definitely had an emotional impact on me,” Silver said. “[Levine] described her relationship with her grandmother and how they had a mainly unspoken bond, and that really resonated with me because, being half Jewish, my grandmother was also Jewish. That was pretty much exactly our relationship.”

Silver said she was surprised to learn that others shared similar experiences to hers and said she feels that people can be connected by their generational trauma.

As she closed out the lecture, Levine explained the importance that stories of generational trauma have in the modern day.

“These stories are still with us,” Levine said. “An event that may seem to have happened before one’s time, or in some faraway place, is still present in the fabric of our everyday. … We’re increasingly surrounded by fractured lives and families, and their stories of loss and survival are also being embodied and inherited by you and by their descendants. Being able to share these findings with you, and also with my own children, who will now have a better sense of their own family’s history and identity, is extremely fulfilling.”