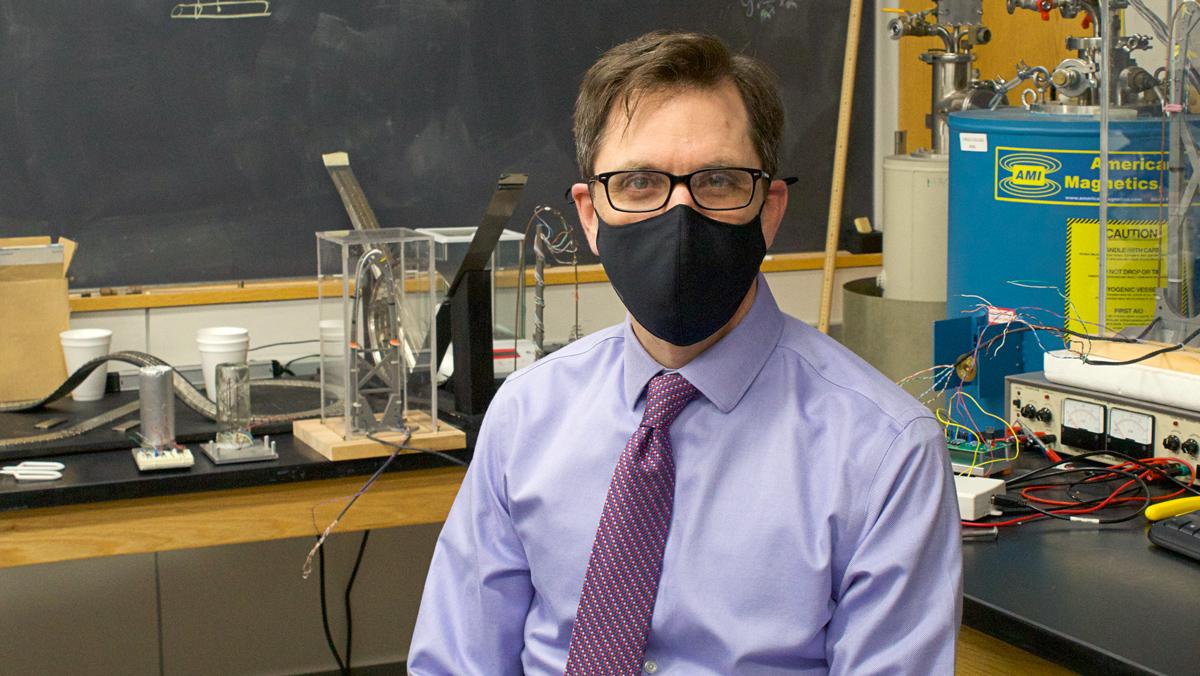 Matt Sullivan, professor in the Department of Physics and Astronomy at Ithaca College, received a $196,000 grant from the National Science Foundation earlier this month.

The grant will help fund a three-year research project Sullivan is working on with students and members from SUNY Polytechnic Institute in Albany and The College at Brockport. Sullivan’s research project involves niobium oxide being used in neuromorphic circuits. Niobium oxide is a chemical compound that can be used in glass, optic and ceramic applications. These circuits are used to mimic neuron architectures in the human nervous system. The goal of Sullivan’s project is to study these materials and integrate them into electronic components while also training undergraduate Ithaca College students to use the nanofabrication facility at Cornell University.

Jordan Broking: What made you interested in taking part in this type of research project?

Matt Sullivan: All academic programs have to be reviewed periodically, and I was one of the faculty members reviewing the program at [The College at Brockport], just outside of [Rochester, New York]. In the process of that review, I met another faculty member who was there, and we had interests that were similar, and we just we got along really well. He said, “You know, we should write a proposal together.” And I was like, “Okay,” and he was like, “So look, I know about these materials because I worked on them when I was a postdoc.” He’s got this collaborator at [Brockport]. He has contacts at the naval research lab, and so he’s like, “So we can try [to] work with them to make films, and then I’ll do all the structural characterization.” He’s going to look at their crystallization, and he’s going to kneel them into furnaces. … And then [he said], “You can do the electrical characterization,” because he doesn’t have any expertise in that. … I’m not an expert in niobium oxide, and I’m not an expert in memristive materials. My expertise is in superconductors, not oxides or semiconductors, but I do have a lot of expertise in electrical characterization and electrical measurements of materials and films, as well as taking the films and patterning them into devices.

JB: What challenges are you expecting to face along the way with this project, and how are you planning on overcoming those?

MS: Oftentimes when we’re working with our students in the lab and we’re doing experimental physics, there’s a lot of complaints and frustration about how many things go wrong so often. … All of those problems are things that we know are going to happen, and after almost two decades of doing this, you get sort of in a Zen state. And — as I discussed with my students — somehow a lot of physics and science, frankly, is many very small and annoying mundane tasks to get something done, and somehow the addition of all those small and annoying mundane tasks add up to something that’s really very exciting. So all of those problems I don’t really see as it being difficult to overcome. The most difficult problems to overcome, I think, are when we’re doing something that’s new. Memristors are new to me, and we don’t know what’s going on, and we don’t understand the results, so we’ll be in the same position where all of our students are when they get into advanced lab and they do a measurement and they don’t understand what’s happening. … I know we’ll have problems in measurements and samples and burning things out, and those I can anticipate, but I’m not afraid of those.

JB: Why do you think it’s important to actually get involved in this type of project, not just for yourself, but also for your students?

MS: I’ve spent a lot of time thinking about this, and it also comes down to sort of why would you want to work at Ithaca College, let’s say, as opposed to working at Cornell because Cornell is a great institution. Research institutions are fantastic schools, so why does Ithaca College need to exist? And the answer for me is that I do research. I do research not because I necessarily want to advance the fundamental science. The main reason why I do research is to train undergraduate students how to do research. The context that I use to train them is this research project or other research projects that I’ve used that were previously funded or aren’t even funded whatsoever. … But for me, it’s really about teaching students how to do science, and that’s why it’s important for me to do this science. It’s a two-tier system. I get to advance fundamental knowledge that human beings have about the universe, and I get to train students how to advance human beings’ knowledge about the universe.