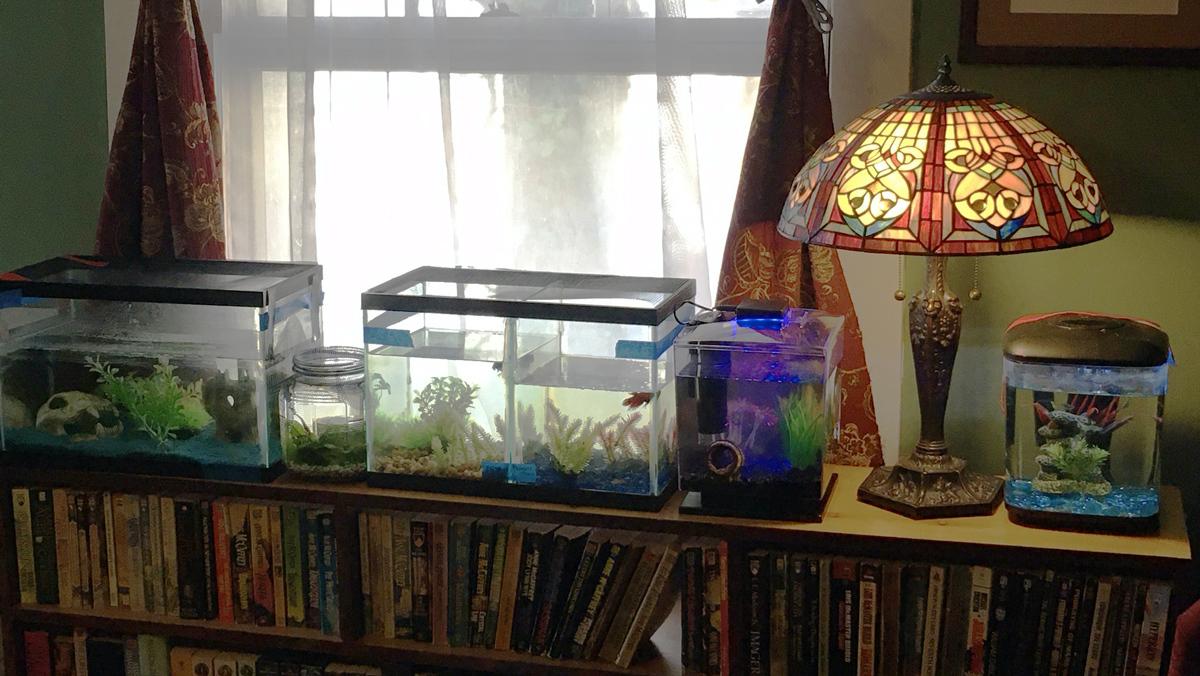 Courtesy of Leann Kanda
Leann Kanda, associate professor and chair of the Department of Biology at Ithaca College, is taking care of students' pets that were left behind in dorms over spring break.
By Alex Hartzog — Staff Writer
Published: April 20, 2020

Leann Kanda, associate professor and chair of the Department of Biology at Ithaca College, kept three betta fish — Inky, named after the blue ghost in “Pacman,” Zelda and Princess Peach — in her on-campus office.

The college decided to move to online learning and close student housing for the rest of the semester during spring break because of the COVID–19 pandemic. Kanda’s fish were still on campus, and she realized that other pets owned by students may be trapped in on-campus housing because students did not get the chance to retrieve them before the college shut down.

“I had pet fish in my office,” she said via email. “It occurred to me that there would be pets throughout the residences. I [have] the resources to care for them, so it seemed natural to help in the process.”

While there was a short window between the college’s extended spring break and the beginning of remote learning, many students were unable to return to their dorms and retrieve all of their belongings. Kanda decided to post on social media pages, including Overheard at IC on Facebook, where she asked Ithaca College students to email her for assistance in saving their pets.

Kanda said via email that she has been working with the Office of Residential Life staff to retrieve stranded pets left in dorms. So far, she has rescued 17 fish and one frog. She and alumni in the Ithaca area are currently housing and taking care of all of the pets in their private residences.

Kanda, who lives with her husband and two cats, Nakia and Yuki, is now hosting around one dozen fish in her home.

“When I apologized for bringing [the fish] all home but that I just couldn’t leave them to fate, his response was ‘It’s how I know you haven’t been replaced by a ‘pod person,’” Kanda said via email. “[It’s] a running joke we have.”

Freshman Kyle Gordon left campus for his home in Long Island, New York, the day after spring break started with every intent to see his tank full of yet-unnamed guppies after the break. Gordon was not able to return to campus due to travel restrictions.

“I did have a fish feeder in the tank for about one week, but that was nothing compared to not being able to go back until May,” Gordon said.

Although she was motivated to rescue the animals because she is an animal-lover, Kanda said via email, she also wanted to make students a bit happier during these stressful times.

“I love animals and would have been saddened by the idea of them slowly starving to death,” Kanda said via email. “It has also been nice to contact the student owners and know that I’ve given them a little cheer.”

After receiving an email from Res Life about the service, Gordon reached out to Kanda for help and said he was filled with joy when he got an email saying his fish were finally safe.

“It was the best feeling ever when I got that email that they were safe,” Gordon said. “I was assuming they were going to be dead when I returned.”

Jenny Pickett, assistant director for Res Life at the college, has been helping Kanda rescue animals in campus dorms.

Pickett said that she and fellow staff members in Res Life and the Division of Student Affairs and Campus Life also noticed when they were doing dorm checks after the extended spring break that pets were left in dorm rooms.

“We did room checks after the buildings closed,” Pickett said via email. “On that Monday, we went through making sure minifridges were plugged in, noting if there was food in them that would potentially spoil that needed to get pulled out and then identified if we saw any animals in the room.”

Kanda said via email that she will be keeping the animals in her residence until nonessential travel restrictions are lifted. Once this occurs, she said, she will reach back out to students to coordinate how to proceed withpicking up the animals.

Kanda said via email that she has been in communication with students via email updating them on how their pets are doing.

Despite the constantly changing circumstances surrounding COVID-19, Kanda said via email, she is still willing to retrieve stranded pets that were left behind or missed during room searches.

“We care desperately and are just as stressed as our students,” Kanda said via email. “Everyone’s health and safety is the number one priority, while we are trying hard to also keep serving our educational mission.”

If you or somebody you know has a pet still on campus, you can contact Kanda at lkanda@ithaca.edu.