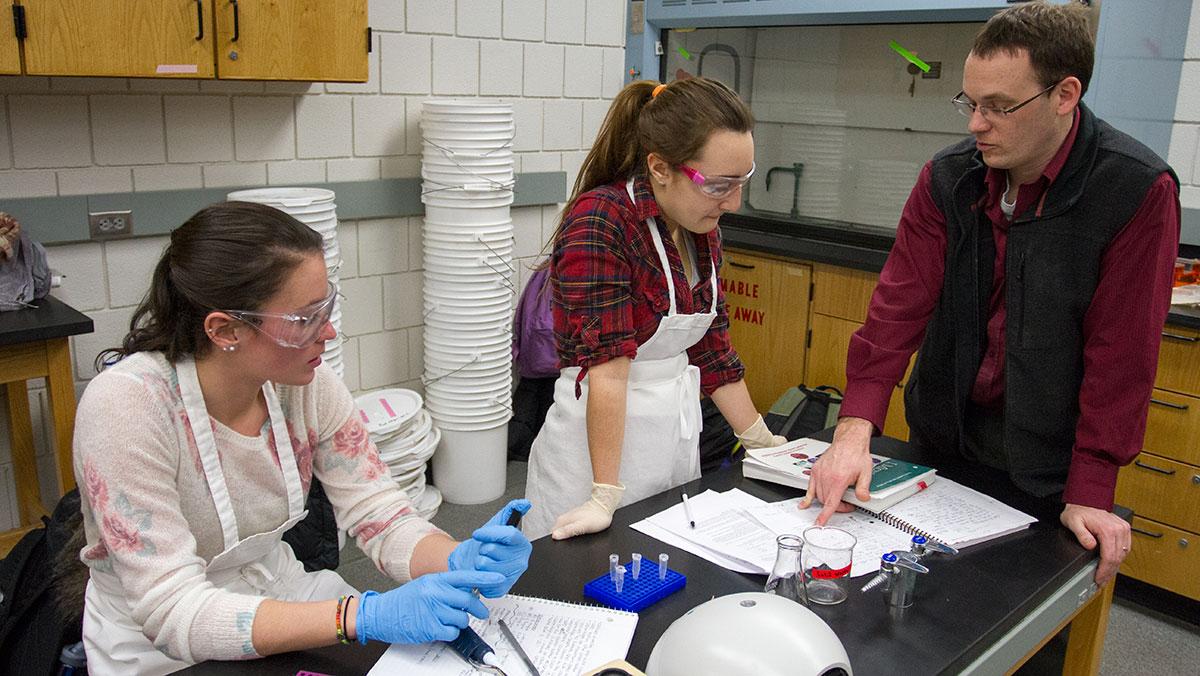 Antibiotic immunity, or the ability for bacteria to resist the effects of antibiotics, is one of the world’s most pressing issues, according to the Centers for Disease Control and Prevention. Dave Gondek, associate professor of biology at Ithaca College, is currently investigating foundational research concerning alternate treatments for diseases caused by these mutated bacteria.

Gondek, who graduated with dual majors in biology and biochemistry at SUNY Geneseo before going on to receive his doctorate in immunology at Dartmouth College, has been teaching at Ithaca College for four years. Since he started, his work has revolved around evolutionary forms of medicine that he said he hopes will someday replace the need for antibiotics, considering the growing immunity many pathogens are beginning to display.

Gondek’s current research revolves around the progression of adaptation within specific strains of chlamydia, a sexually transmitted bacterial infection that can lead to infertility, pelvic inflammatory disease and blindness. According to estimates by the CDC, 2.86 million chlamydia infections occur annually in the United States.

Gondek said strains of chlamydia are host-specific and are therefore much better at infecting the species they are particularly adapted to. However, there are two strains of the disease that are currently prominent in the human population: chlamydia trachomatis and chlamydia pneumoniae.

According to the CDC, chlamydia pneumoniae is a human strain that often causes respiratory infections in its hosts. Chlamydia trachomatis is the more common strain and causes infections in the eyes and urogenital area.

“If you look at the genomes of these two different human pathogens, they are very dissimilar,” Gondek said. “Chlamydia pneumoniae is very similar to a chlamydia pathogen found in cows and sheep … so we think it is zoonotically acquired, which means that it has recently emerged from an animal reservoir and leaped into humans.”

He made a comparison to the recent West African emergence of Ebola, which was originally a pathogen strictly limited to bats but made a transfer into the human population. Gondek said further research concerning the “leap” that chlamydia is able to make between species can lead to a deeper understanding of how other pathogens adapt and function.

“The exact same features and systems [of the chlamydia pathogen] are shared with many bacterial pathogens,” he said. “If we understand how chlamydia has adapted to hosts — humans in particular — you can look at it at a genomic level … and perhaps we can take some of these virulence factors and make small-molecule inhibitors for proteins that can perhaps work against other pathogens.”

Gondek said he is ultimately researching alternatives to antibiotic treatments of bacterial pathogens through emerging forms of medical microbiology. He said engineering certain proteins that can inhibit the processes of cell-targeting infections like chlamydia can possibly solve the growing issue of antibiotic immunity.

Senior biology major Emma Nelton is currently conducting chlamydia research under Gondek’s supervision. She is analyzing the behavior of the pathogen among three different host species — human, mouse and guinea pig — for each of which there are specific strains of chlamydia.

“The way that we look at its ability to jump species’ boundaries is by infecting the three different cell lines with all three different pathogens,” she said. “I can compare the degree to which each species of chlamydia is able to infect different hosts.”

Claire Tersigni, a junior biology major at the college, is currently researching the expression of certain proteins in chlamydia-infected cells. In regard to working with Gondek, she said he’s a generally great professor to work with.

“I like learning new things from him. He’s really helpful in providing more foundational knowledge,” she said. “He’s also really supportive about all the students interacting and teaching one another.”

Nelton said she was also happy about her experience working alongside Gondek.

“Dave’s great,” she said. “He has really high expectations, but he does his best to make sure that everybody can live up to those expectations. He does a great job in making sure that people get the most out of their research and helping you figure out exactly what you want to do.”

Gondek said he approaches teaching with a very hands-on approach. Everything besides his own continuous background research is done by students in the lab.

“They do the experiments, and when they collect the data we sit down and talk about it and interpret it together,” he said.

He said the “ah-ha” moment is his favorite part of working alongside students.

“All of the sudden it clicks and they see that they created this thing that has never been known to the world before,” he said. “It’s exciting to be a part of that environment.”