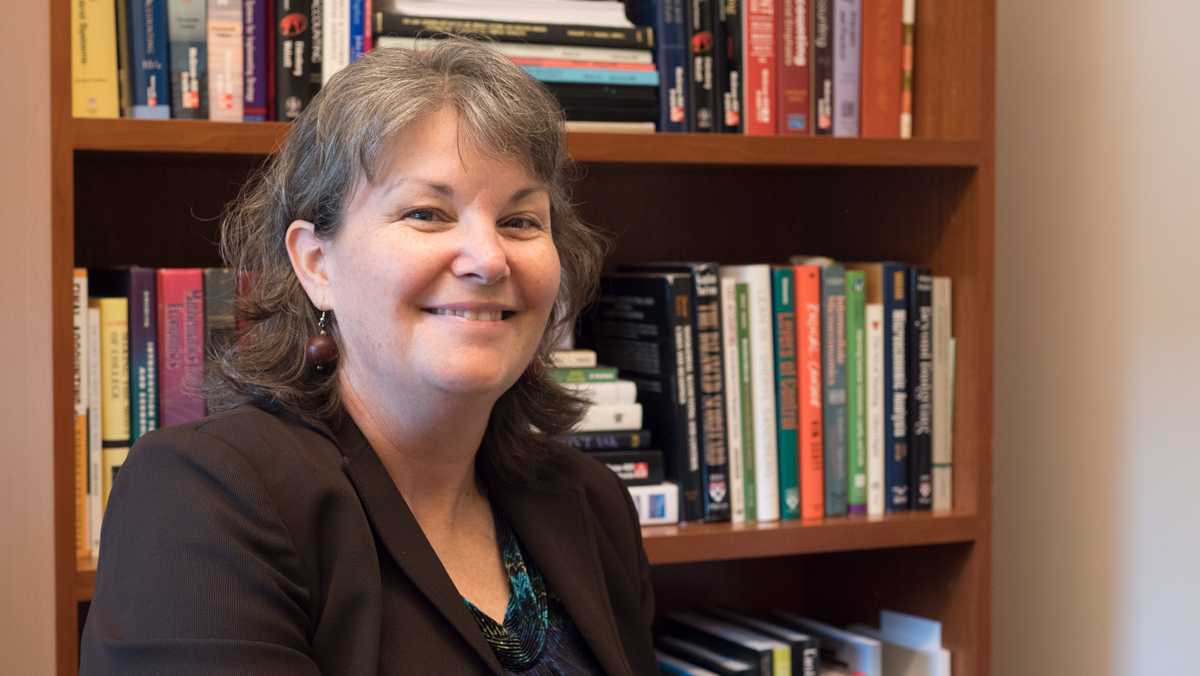 Elias Olsen/ The Ithacan
Margaret Shackell-Dowell, visiting professor at Ithaca College, set a 50-for-50 initiative to raise $50,000 for organizations before her 51st birthday in March of 2018.
By Madison Moore — Contributing Writer
Published: October 2, 2017

When Margaret Shackell-Dowell, visiting assistant professor of accounting at Ithaca College, turned 50 in March 2017, she wanted to follow in her friends’ footsteps and do a 50–for–50 initiative. Shackell-Dowell asked people she knew to donate to some of her favorite organizations in $50 increments instead of giving for presents for her milestone birthday.

Shackell-Dowell set a goal to raise $50,000 over the course of the year for 17 organizations she is involved with or connected to.

Shackell-Dowell reached out to friends, family, colleagues, former students and Facebook friends to get people to donate to one or more of the organizations.

She went through every friend she has on Facebook and alphabetically message each one, devoting a different day to each letter in the alphabet. She said she believed reaching out to people individually rather than through a social media post is more direct and got many people to donate.

“I sent a lot of emails, and people, I think, respond more to that,” she said.

People can go to Shackell-Dowell’s website and choose to donate $50 dollars or enter a custom amount to the charity of their choice. Donations have ranged from $10 to $1,000, Shackell-Dowell said.

Shackell-Dowell is heavily involved in the Hangar Theatre in Ithaca. She set a goal to raise $10,000 to donate to the theater. She has been on the theater’s board of trustees since 2008 and has served as vice president and president. She set the goals for the other 16 organizations based on her proximity with each organization.

Michael Barakiva, artistic director at the Hangar Theatre, expressed his gratitude for everything Shackell-Dowell has done for him and for the theater, and said “she is a woman of exceptional and unimpeachable integrity.”

“She spearheaded so many of the initiatives that are integral to the theater,” Barakiva said. “Her commitment is really profound.”

Shackell-Dowell was an associate show sponsor for two shows this summer, “Disgraced” and “Dégagé.” The money donated to the theater will be split to cover the cost of these two shows.

Shackell-Dowell lives in Lansing, New York, and is involved in the Lansing School District. She is the Lansing High School vice president for the Parent, Teacher, Student Organization (PTSO), the past president and current publications and community relations coordinator for the Lansing Theatre and Performing Arts Boosters Club (LTAPA), a basketball parent for the Sports Boosters Club and a board member of the CDC Tech Boosters for the school district. She has set a $5,000 goal for each of these organizations because of her involvement with them.

“I’ve always admired Margaret because she has held philanthropy as one of her core values,” Hopkins said.

Hopkins said Shackell-Dowell’s dedication to the PTSO is reflected in her work with the Pack- a-Backpack program the group organizes. Shackell-Dowell is the chair of this program, which provides K-12 students in need with a full set of school supplies for the year. Due to lack of space in the school district, she stores all of the supplies for the Pack-a-Backpack program in her house.

“Margaret’s just been really remarkable in helping to elevate the role of PTSO at the high school and doing that through opportunities to engage our high school students in a volunteer capacity,” Hopkins said.

The PTSO will use the $5,000 from her project to help feed an endowment fund that would be dedicated to scholarship opportunities to help students who can’t afford certain class activities or class trips, Hopkins said.

Lisa Lyons, social media and website coordinator for the LTAPA, said via email that Shackell-Dowell is both energetic and hard-working.

“She is also very well-connected throughout the community, so she’s often been the one to line up advertisers for the concert/theater performance programs, and she designs the programs,” Lyons said.

Lyons said the use of the $5,000 donation to the LTAPA will be determined at an upcoming board meeting.

Shackell-Dowell is also supporting local businesses through this project. She is using Givegab, a local organization that helps nonprofits fundraise, and supporting a local bakery called “Sugar & Slice” by having cake parties for each organization once she has reached the donation goal. Six of the 17 organizations have already met their goal.

She has included Plastics Tides in the campaign, which aims to raise awareness about plastic pollution and promote the change from plastics to reusables across the world.

Gordon Middleton and Christian Shaw, founders of Plastic Tides and alumni of Cornell University, met Shackell-Dowell after she reached out to them to help in their fundraising efforts when she was a professor at the university.

Middleton said the $2,000 from the project will most likely go toward Plastic Tide’s SUP’r Kids Ithaca Program, a summer program that tries to give underprivileged youth the opportunity to get out on the water.

Barbara Mink, senior lecturer of management communication at Cornell University and former colleague of Shackell-Dowell, said Shackell-Dowell had a commitment to her students and worked to make female faculty at the Johnson School be more of resource to female students.

“The kind of energy she brings to the local community she also brought to what she did at Cornell,” Mink said.

Other organizations that are a part of this project include The Kitchen Theatre Company, First Presbyterian Church Ithaca, 350.org and the YMCA of Ithaca and Tompkins County. The organizations will decide how the donations will be used once they are received.

The men’s and women’s crews and members of Ithaca College’s chapter of Habitat for Humanity are finishing fund-raising for the sixth annual Row for Community charity event in Campus Center on Feb. 4.