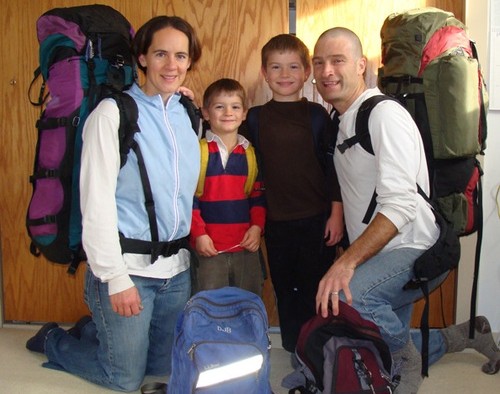 Courtesy of Michael Smith
Michael Smith, his wife Kristen and their children set off for Nicaragua in January 2013.
By Sage Daugherty — Online News Editor
Published: September 24, 2013

Michael Smith, associate professor of history, gave a presentation on “Building Community Through ‘EduTourism’ in Nicaragua,” yesterday afternoon. Smith discussed the sabbatical he took in Nicaragua in Spring 2013, where he studied renewable energy.

EduTourism is an alternative model of sustainable development that brings revenue through tourism and does not harm the environment, Smith said.

Fifty students and faculty gathered at 4 p.m. Monday in Center for Natural Sciences room 112 for this semester’s third Sustainability Cafe.

While on sabbatical for the 2012-13 academic year, Smith brought his family to Sabana Grande, a small village in northern Nicaragua. They were there from January to May helping with sustainability efforts in the village, such as solar-powered cookers and water distillers.

Nicaragua is the second poorest country in the western hemisphere after Haiti. Smith discussed the differences in poverty level by comparing the U.S. and Nicaragua. He said the measurement of poverty depends on the person’s life experiences.

“One of the things I came to learn during this trip was that our measures of poverty are a little bit flawed,” Smith said. “Purely in material terms, Nicaragua is impoverished. Measured in other terms, Nicaragua is far more wealthy than most places in this country.”

Sabana Grande has a well that is maintained by a cluster of 12 families who live in the village. Smith said the community is forged around the well because of basic challenges it faces, like access to clean water.

“They come together and it’s hard to describe if you haven’t experienced it, what it’s like to not be able to turn on a tap, [and get] water,” Smith said. “You’re conscious of the preciousness of water when every drop you’ve used is something you haul … [The well] changed their lives enormously because it changed their time of getting water from two hours to a half an hour.”

Freshman Kennedy Moore said she was intrigued by the presentation because it focused on alternative energy and the cultural difference between Nicaragua and the U.S. Moore said she was impressed by the small steps a rural community like Sabana Grande was taking toward sustainability.

“I’m really into alternative energy, and how they’re implementing it, not on such a big scale but home-by-home; that in itself is very interesting too,” she said.

Smith applied for a Fulbright scholarship to Nicaragua because it was one of the few Spanish-speaking countries that did not require applicants to demonstrate fluency in the language.

Even though he did not end up receiving a Fulbright, Smith and his family decided to go anyway because they had already learned so much about the country and the culture, he said.

Smith said he was constantly aware of how privileged he was, being from the U.S. and having access to electricity and clean water. He said the trip was a reminder of this privilege and an opportunity to immerse his children in a different culture.

“That’s another aspect of my very privileged life, just to have a sabbatical where you can take a semester off,” Smith said. “It was such an amazing experience for our kids, too. We’d love to get them immersed in a Spanish-speaking environment again. Getting exposed to that, for all of us, is healthy for keeping perspective on what we have here.”

Paula Turkon, assistant professor of environmental studies, said Sabana Grande is using sustainability as a way to lift the community out of poverty and better their lives.

“We’re in a society where we’re really comfortable and able to think about these kinds of issues,” Turkon said. “They’re in a smaller society that doesn’t have the economic means, and they’re seeing sustainability as a way out of poverty and uncertainty. They have an advantage we don’t have because they know how to work as a community, which unfortunately, in our society, we’ve lost that due to technology.”