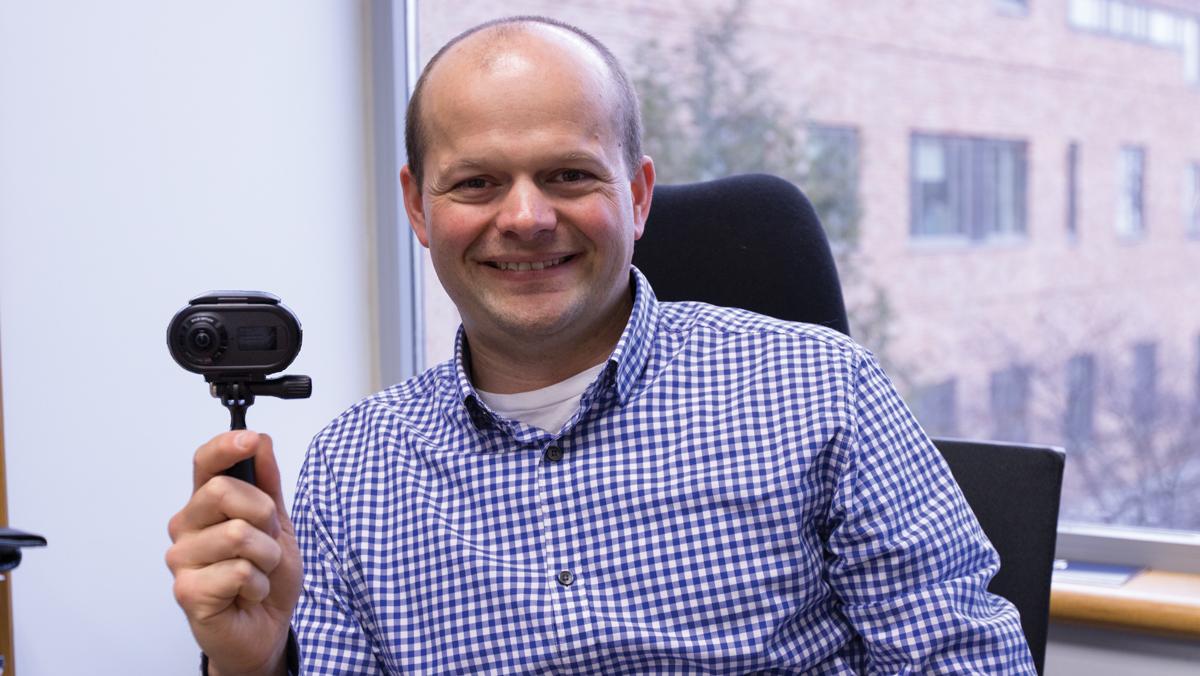 An Ithaca College professor has been awarded a grant to buy 360-degree cameras for immersive learning purposes.

Sebastian Harenberg, assistant professor in the Department of Exercise and Sports Sciences, received $11,125 from President Shirley M. Collado’s Seed Grant Initiative, which she announced last November to fund interdisciplinary projects on campus. The initiative is a collaborative effort to use 360-degree cameras to provide students with an immersive experience. Using the grant money, Harenberg bought 11 Rylo 360-degree cameras, which arrived March 28. Harenberg’s proposal was one of 13 that received funding.

“We’ll be using it to video record experiences for the students, and they can relive it in 360-degree videos,” Harenberg said. “Imagine that you can sit in a classroom and with augmented reality through some glasses, you can actually relive certain experiences that will bring the context of what you are talking about in the classroom that much closer.”

In addition to using the cameras in the classroom, Harenberg said they will be used for different research projects. One of the groups that will conduct research with the 360-degree cameras is his sports psychology research team.

One of the areas Harenberg said he is interested in potentially researching with the 360-degree cameras is the decision-making process in sports, which he has researched in the past with other technology.

“[The cameras] gives us completely new opportunities to actually reevaluate a play,” Harenberg said. “What I would like to do with these is to create more authentic situations for players to test their cognitive perception skills to make quick decisions on the field, as well as train them potentially.”

Senior Margaret Nieto is one of the students on the team working with Harenberg to conduct this research. Nieto said they are currently in the early stages of the research.

“We are all extremely excited to be awarded such a generous grant,” she said. “The grant also gives us, as researchers, the chance to work with the athletes and allows those athletes to be a part of a cutting-edge training program.”

Harenberg said that students interested in using the cameras should reach out to him. When they come in, they will be used for several research projects, including Harenberg’s research of the decision-making process in sports. Harenberg said the cameras will eventually be available through Information Technology at the college, where students and faculty will be able to borrow them for learning purposes. There is currently no timeline for that to take place.

Roberts said that he is interested in the content creation aspect of the 360-degree cameras and that he wants to use them to explore virtual reality.

“No other communication school is doing something like this, and that’s the advantage of the Park School,” he said. “We have a great Park School and a great HSHP School that really like each other and collaborate on super cool stuff like this.”

“There is such an opportunity here for students to research with us and create the content with us,” he said. “It’s really a student-centered project; it’s just the best of what Ithaca can do.”

Several other professors involved in the collaboration declined to comment because they said they were too early in the planning process to discuss the projects they were working on.