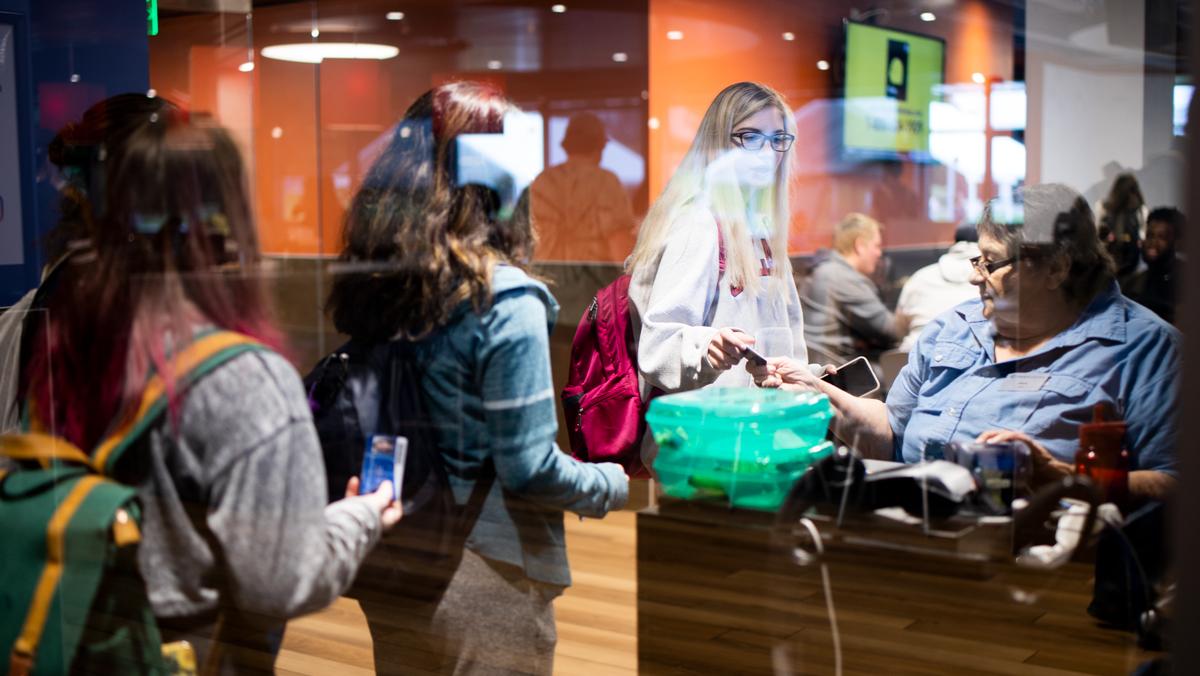 Reed Freeman/The Ithacan
Students line up outside of the dining hall to swipe in for a meal. Students at Ithaca College demonstrate a need for swipes that is greater than the national average.
By Ryan Bieber — Staff Writer
Published: October 1, 2019

Beginning in September, members of Swipe Out Hunger, a program that helps Ithaca College students facing food insecurity, went to the dining halls and collected guest swipes to redistribute to other students who could not afford meals otherwise. Although volunteers collected swipes faster than last year, students at the college demonstrate a need for swipes that is greater than the national average.

Swipe Out Hunger is a nationwide organization founded in 2010 to end student hunger on college campuses. The college joined the movement in Fall 2018 after Unagh Frank ’19 headed a trial program with Hillel, Ithaca College Dining, Student Financial Services and the ID Office. With Swipe Out Hunger, students at the college can anonymously donate one guest swipe per semester to students facing food insecurity. Those who are eligible receive swipes in packs of 15, 30 or 45.

Students at the college struggled with food insecurity in the past. The Campus Climate Survey, which was conducted in Fall 2016, said out of the approximately 3,000 students who responded, approximately 500 students said they experienced difficulty affording food.

Junior Aaron Segal, a volunteer for Swipe Out Hunger, said the program has collected 718 swipes and has given out 240 to those in need so far this semester.

Segal said volunteers were able to collect swipes more efficiently with a QR code that allows students to scan the image with their phones and fill out the form online.

Segal said the QR code allowed volunteers to approach multiple groups of people and have them all scan it, a process that was much faster than going to individuals one at a time.

“We got 400 in the first day, whereas last year we got 110 just because we couldn’t move fast enough,” he said.

While the program is on track to have another successful year, a survey by Swipe Out Hunger and the college shows a demand for more guest swipes.

This is a large increase compared to the results of the national Swipe Out Hunger Survey in which only 12% of students said they needed approximately 20 or more swipes.

Segal said the biggest problem the program faces is a lack of awareness about the program among students.

“The big thing we’ve been talking about is a lot of it is that people don’t know about it,” he said. “They only find out about it through word of mouth really.”

Lauren Goldberg, executive director of Hillel, who works with Swipe Out Hunger, said that educating people about the program is a necessary step.

“We have over 4,000 people on a meal plan, so even to collect 1,000 swipes is only one-fourth of the students,” Goldberg said. “It’s just a matter of getting the word out to them.”

Approximately 4,395 students are living on campus or in the Circle Apartments or the Garden Apartments. Starting Fall 2019, every student who lives on campus, excluding those who live in on-campus apartments, is required to purchase the unlimited meal plan.

Segal said that because students on campus are now required to have unlimited meal plans, the majority of people suffering from food insecurity live off campus or in on-campus apartments.

He also said that while Swipe Out Hunger planned to collect swipes until Sept. 10, it stopped promoting the cause in dining halls around Sept. 6 because students who had already donated swipes were frustrated by the repeated efforts to promote the program.

Senior Kelly Madden, a self-described food–insecure student, lives off campus and uses guest swipes collected by Swipe Out Hunger to get meals throughout the semester.

“Coming to college and dealing with finances and everything has been probably one of the hardest things,” Madden said. “I don’t go to bed at night ever thinking, ‘Okay, I have food in the fridge or my bills are paid.’”

Madden said people need to have conversations about food insecurity.

“This is making or breaking someone’s day,” Madden said. “When you’re hungry you can’t focus on school. My main hope is that people get more comfortable talking about this so we can break down those huge barriers of wealth and food insecurity and build a bridge there.”