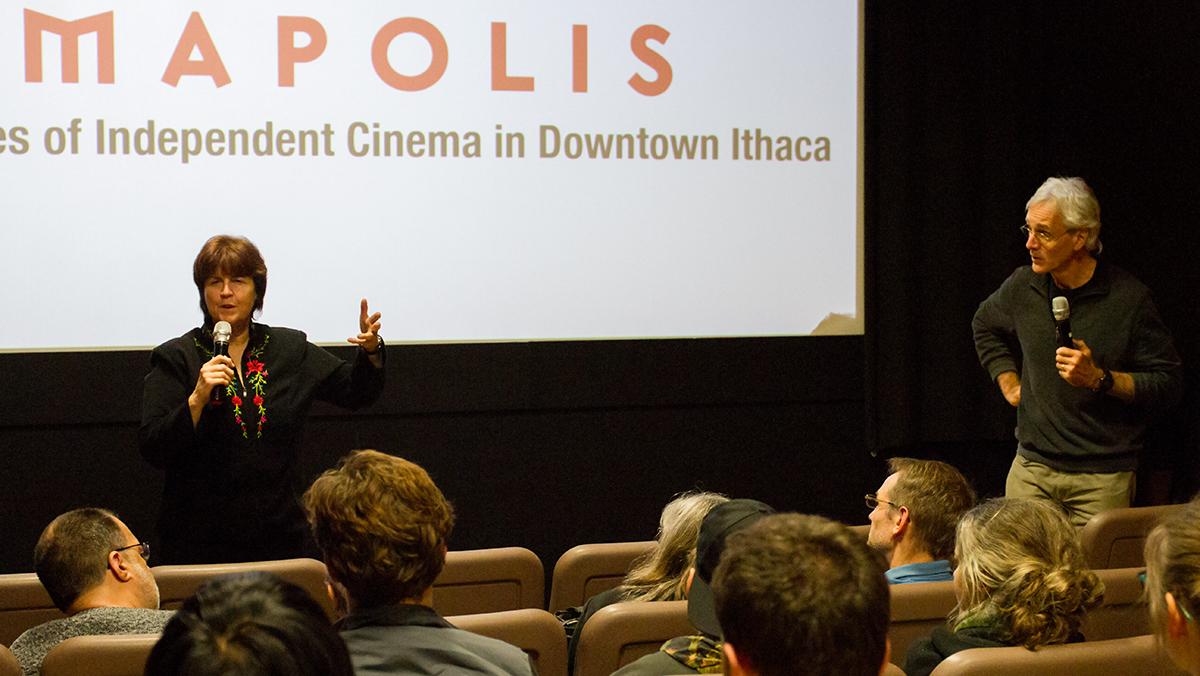 In reaction to the proliferation of “alternative facts” and “fake news,” many make the comparison to a dystopian reality that has only been entertained in works of fiction. To examine the parallels of current events and fiction, cinemas across the country held screenings of the movie adaptation of George Orwell’s “1984.”

At 7 p.m. on April 4, members of the Ithaca community filed into Cinemapolis to join nearly 200 other art movie houses across the country to watch the film, which famously depicts what could happen under a totalitarian regime.

The screening was part of a national event organized by the United States of Cinema in which independent movie theaters across the country could “initiate a much-needed community conversation at a time when the existence of facts, and basic human rights are under attack,” according to the United States of Cinema website. The screening at Cinemapolis was hosted by Project Look Sharp, a media literacy project through Ithaca College’s School of Humanities and Sciences.

Chris Sperry, director of curriculum and staff development for Project Look Sharp and teacher at the Lehman Alternative Community School in Ithaca, said engaging with the story of “1984” seems especially important in the era of fake news and alternative facts.

“I actually teach high school English and social studies and have taught ‘1984’ over the years, and it just seems more relevant than ever,” Sperry said.

The film was released in the year 1984 and stars the late John Hurt as protagonist Winston Smith and Suzanna Hamilton as Winston’s companion Julia. The film follows Winston’s life in Airstrip One, a totalitarian government surveillance state, and his forays deeper and deeper into disobeying the wishes of Big Brother and the Party leaders.

In a segment aired before the movie began, Michael Radford, the screenwriter for the movie, said that the way authorities maintain control in “1984” is through instilling fear in others.

“The point is not to make life comfortable,” Radford said in the segment. “As they invent machinery, the point is to make life as difficult as it possibly can be. The only thing that … the Party in ‘1984’ wants is not the wellbeing of the people they’re governing. It’s about authority and control.”

After the film, moviegoers were encouraged to stay for a discussion session led by members of Project Look Sharp — Sperry and Executive Director Cyndy Scheibe, professor of psychology at Ithaca College. Scheibe and Sperry opened the discussion by asking for the audience’s initial reaction to the film and then moved the discussion toward the topics of media literacy and education in contemporary society and how these topics contrasts with the movie.

Stephen Emlen, a professor at Cornell University who attended the viewing, said that he was especially concerned with the way people in the United States consume and interpret information and come to conclusions.

“I personally think we desperately need people who understand how to look at the facts and integrate them to come to a conclusion that is based on fact, rather than ignoring them,” Emlen said.

The 40 or so attendees who stayed after the movie also discussed issues of surveillance, alternative facts and how to effectively teach younger people to think critically about the media they consume.

Scheibe closed the discussion by saying that although it is easy to draw parallels between the world of Orwell’s “1984” and the United States after the latest presidential election, she is not completely hopeless just yet because society has a long way to go before reaching the totalitarian state described in the book. She also said that it was important to teach children from an early age to ask questions and do their own research.

“We need to figure out how to teach people to find information, to judge that information in terms of credibility, to really explore how do we know what we know,” she said.