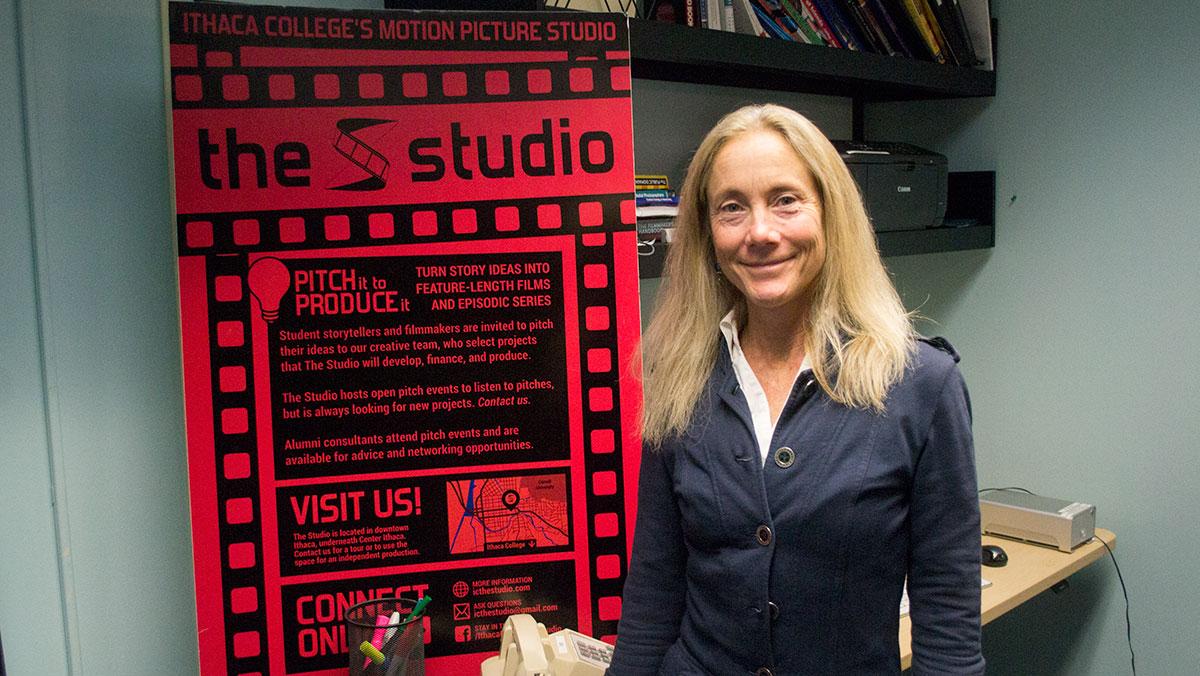 Jennifer Williams/The Ithacan
Carol Jennings, advisor for The Studio in the Roy H. Park School of Communications, said she wanted The Studio to become self-sustaining. The Studio produced its first film over the summer.
By Ramya Vijayagopal — Assistant News Editor
Published: December 10, 2014

Student work produced in Ithaca College classrooms may no longer have to share a copyright with the college if certain language amendments to the college’s legal policy are approved.

Traevena Byrd, associate counsel and director of equal opportunity compliance in legal affairs, said the proposal to reform the Intellectual Property Rights policy would clarify this language since the current policy indicates that the college should share a copyright with students for their class work.

“The new policy will be much clearer and more comprehensive in addressing current issues in intellectual property rights in an academic setting,” Byrd said. “The revisions are … not set in stone. They still have to go through a process.”

The proposal also calls for updating the terms of the policy to account for the increased student access to high-end technology. Byrd said students today have greater potential of getting attention for work produced by college-provided equipment, as the process for obtaining access to advanced equipment was more lengthy in the past.

“Students are here to be in this environment, to have access to this stuff and to create,” Byrd said. “We didn’t want to send a message that we were impeding that creativity by trying to claim a cut in advance. That’s not the message, so that’s why we are reshaping that piece.”

Byrd said the primary purpose of these revisions, which a group composed of both faculty and staff members began discussing last year, was to clarify and update the old policy.

“We’ve got this policy that gives the college certain rights,” she said. “In many cases the college elects not to necessarily try to enforce those rights. But it’s case by case, so when you get to the point where you’re making so many exceptions, you want to look at the rule and re-evaluate the rule and see if it’s keeping up with the times.”

Byrd said the old policy, which became effective in 2001, needs to be updated to stay consistent with advances in technology.

“Even if you look at the old policy now you’ll see it talks about cassettes,” she said. “You want to address intellectual property that comes in all forms of media, but you have to expand it to include things that we haven’t even thought of before. Our policy was created before there was such a growth in distance education and online learning.”

Byrd said the process for this policy change began last year, but due to changes in administration with Marisa Kelly, former provost and vice president of educational affairs, leaving the college, the changes cannot be completed until next semester.

“The original goal was to do it this semester,” she said. “It was in the provost’s hands last spring … so I kind of held off on pushing it forward until we could get that sorted out.”

Byrd said not everyone contributing to the discussion was in agreement about the college’s rights to student work, but the committee formed by the college made up of faculty and staff from across the campus decided to suggest a change in wording to protect and promote student creativity.

“What the committee concluded is that it makes sense to be consistent,” she said of how the policy affects students from different majors. “We think it’s important to allow students to create in an environment where they feel comfortable that their rights or their personal intellectual property is secure, but the nuts and bolts of it still need to be worked out.”

Byrd said there were some areas that required more discussion than that which is needed for student work in classrooms, as some topics fall into a gray area because they are beyond a classroom setting but still use college resources. She said one example of this is The Studio, the college’s motion picture studio created last fall, where student executives and alumni mentors work with college students to produce films and transmedia projects.

Carol Jennings, advisor for The Studio in the Roy H. Park School of Communications, said the program required more deliberation due to the greater allocation of resources.

“In the case of co-curricular areas where the college makes an unusual contribution of resources, then the college expects to earn back some of that investment from the revenue that project earns,” Jennings said.

The Studio produced its first film, “No Fare,” over the summer. The film was written and directed by senior Daniel Masciari and premiered Oct. 11. Sophomore Vanessa O’Connor, marketing director for The Studio, said the program receives funding from the Park School and also uses the revenue produced to take care of the costs of production.

Byrd said The Studio, which is included in the current intellectual property policy along with student classroom work, provides adequate opportunities to analyze the effectiveness of the policy.

“It’s great to have these new projects and initiatives that make us think about copyright and intellectual property in ways that we maybe hadn’t thought about before to make sure we are respecting all of the interests that are involved,” Byrd said.

Byrd said the proposed changes would increase the criteria the college should meet in order to claim ownership over intellectual property rights.

“The times have changed,” Byrd said. “We need to better protect the rights of inventors or creators — and that could be a student or a faculty member — and we need to make sure that whatever we reclaim back, that we have reasons for why we do it, so that there’s some kind of methodology to what we’re trying to accomplish.”