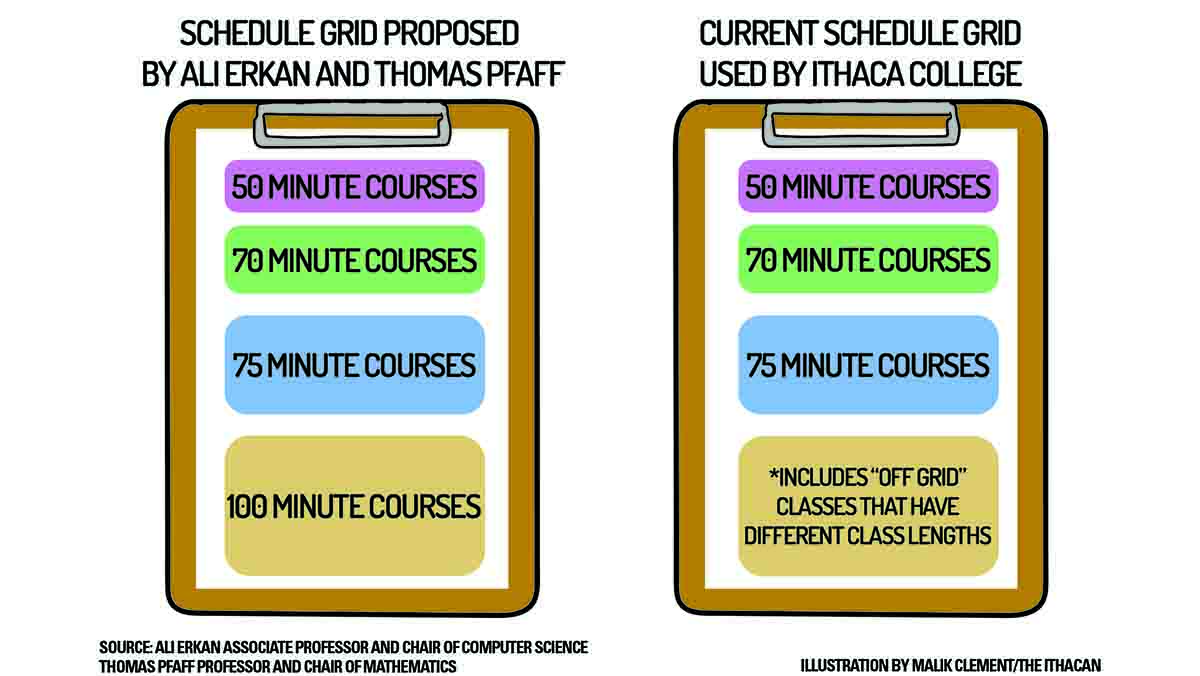 Malik Clement/The Ithacan
On Nov. 3, Ithaca College faculty members were sent an email from the Offices of the Provost and the Registrar explaining that the proposed scheduling grid for Fall 2023 would not be used after faculty raised concerns.
By Vivian Rose — Staff Writer
Published: November 16, 2022

On Nov. 3, Ithaca College faculty members were sent an email from the Offices of the Provost and the Registrar explaining that the proposed scheduling grid for Fall 2023 would not be used after faculty raised concerns.

The Offices of the Provost and Registrar have decided to completely do away with their proposed grid and have not set a date when a new grid will be implemented. In the email sent to faculty, the Offices of the Provost and Registrar wrote that about 45 faculty members of the college had filled out a survey they sent Oct. 17 in a separate email that had proposed the scheduling grid.

In the Nov. 3 email, the Offices of the Provost and Registrar said the continued usage of the current grid would serve the college best, while the offices plan to analyze data from the 2023–24 academic year in order to determine how a new design can be created by college administrators in the future.

“We will consider data including course credit offering, times of offering by credit, student time conflicts, room utilization, course spread (using all start times 8 a.m. – evening), and other key data points to design the future schedule grid at Ithaca College,” the registrar stated in the email.

However, Michael Smith, adviser and professor in the Department of History, said he is unsure of how the Offices of the Provost and Registrar would achieve this through the 2023–24 academic year. Smith said the email sent by the registrar stated that a new schedule grid had to be developed by November 2022.

“I don’t know how they’re expecting to learn from less than a semester’s worth of trial and error,” Smith said.

Pfaff said the pair had not been given any direction to create a new grid. However, Pfaff said that given their backgrounds in computer sciences and mathematics, along with speaking to numerous faculty members about what they need for a grid, they knew how to go about designing a new grid.

Pfaff said there is no plan or strategy that the school is trying to implement for the creation of a new grid currently. He said that the process of designing a new grid that he and Erkan are taking on is completely on their own.

“We’re not a committee,” Pfaff said. ”We’re not appointed by the provost. There’s no real sort of formality to this.”

These two attributes of the current grid have been identified as some of the most problematic pieces of the currently used grid. The current grid does not work efficiently for both faculty or students since it causes many time conflict issues for students either needing courses that overlap or are interested in overlapping courses. Erkan said these are two reasons why the college had pushed to create a new design for the grid in the first place.

The new grid proposed by Erkan and Pfaff includes classes that are switching from three credits to four credits, like labs, practicals and other longer classes with more assigned work than a typical 50-minute, three-credit course.

Sophomore Nandini Agarwal said the grid may benefit her as a student since she said she takes on plenty of work at once.

Erkan said he admits that the compact design of the grid he and Pfaff created appears to cause just as much conflict and has just as many risks as the grid proposed by the provost and registrar; however, he said that this grid offers a chance for more communication between schools who tend to share students.

Erkan said that while there seems to be several risks involved with the grid on face value, the five schools simply have to communicate in order to minimize that risk.

“[Our grid] actually is advocating for departments to have agency and having a greater set of options,” Erkan said. “If they don’t exercise that agency in the right way, the students will be hurt, because this could potentially lead to a greater number of conflicts.”

Pfaff said communication between the five schools is necessary, regardless of creating a new scheduling grid, especially because the college has had to decrease the amount of sections it can offer per course because of the recent downsizing of the college as enrollment numbers decrease as well.

“When you offer multiple sections of the same class, it’s easy enough for somebody to get what they need,” Pfaff said. “But if you start getting to the point where we’re offering only one section of a course that a lot of people need from different departments, it gets harder to accommodate everyone. I think that it’s more of a problem when you offer fewer sections of courses as a smaller college.”

Along with not receiving any direction from the Offices of the Provost or Registrar, Pfaff said there was also little communication from the school throughout the entire process of creating a new grid from when it began in 2019, until now.

“It seems like one would have spent a lot of time talking to the community before you say, ‘This is the grid we’re gonna use,’” Pfaff said. “But that didn’t happen.”