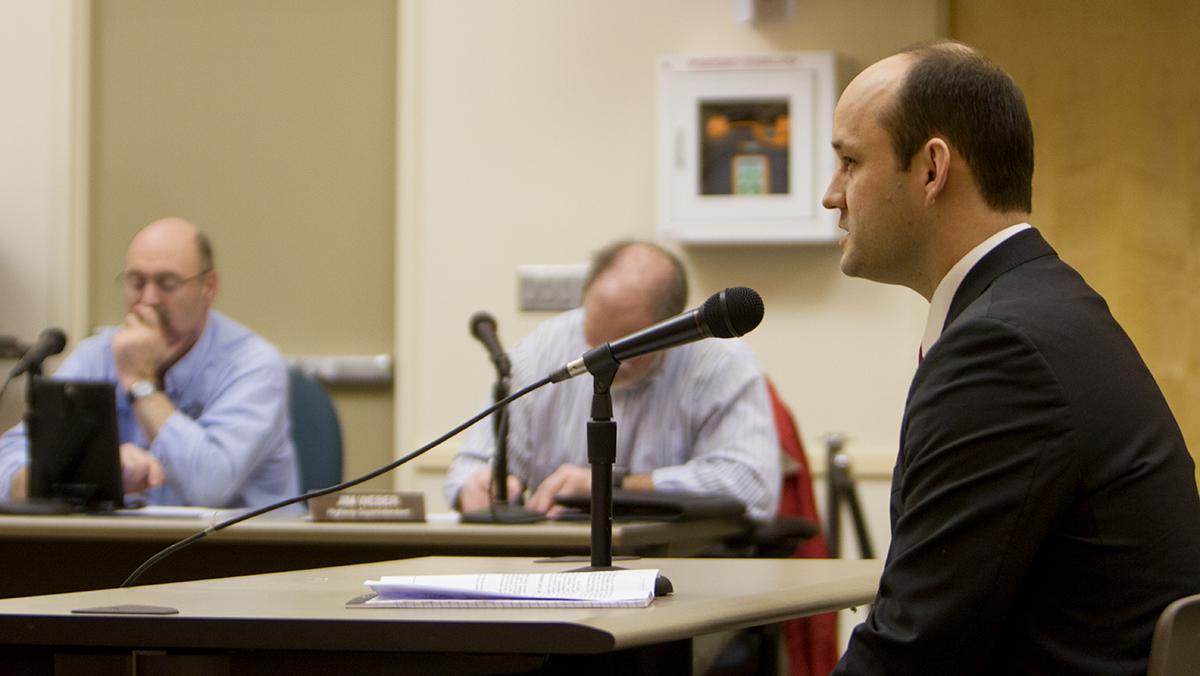 Grace Elletson/The Ithacan
Brody Smith, an attorney representing the college from Bond, Schoeneck & King, speaks to the Ithaca Town board to dissuade them from taking away fire protection from Ithaca College at a public hearing held Feb. 13.
By Grace Elletson — News Editor
Published: February 14, 2017

A attorney representing Ithaca College urged the Town of Ithaca board to vote against the proposal to rescind fire services from the college at a public hearing Feb. 13.

As previously reported by The Ithacan, Ithaca Town Supervisor Bill Goodman said the idea to remove protections arose because the college uses a large number of fire services from the town and does not pay taxes for the services. Details on how much money the college costs the town for fire protection has not been made public but will be in the coming months, Goodman said after the meeting at the town hall.

The college accounts for about 25 percent of the fire calls that are issued to the Ithaca Fire Department, he said.

Brody Smith, an attorney from Bond, Schoeneck & King, represented the college and argued that the proposal violates the United States and New York state constitutions for equal fire and safety protection for nonprofit facilities, which the college falls under.

“Why should the educational institution be singled out and not the hospital?” Smith said.

The college does have a PILOT agreement — Payment in Lieu of Taxes — in which the college provided $33,424 to the town during the fiscal year of 2016, according to a statement by President Tom Rochon. Dave Maley, senior associate director for media and community relations for the college, also spoke at the hearing as a resident of the city and said the majority of calls made for fire services were from the Circle Apartments. This is the land the college pays the PILOT fee for, which means it would not be cut off from fire services.

“Therefore, cutting the rest of the campus from fire protection services would not greatly reduce the number of calls the Ithaca Fire Department responds to,” Maley said.

Smith said he would prefer to resolve the issue with the town amicably but that if the board does vote for the resolution, the college will take legal action against the town.

Goodman said the next step for the board is a discussion with the town’s legal counsel on how to move forward with the resolution to rescind fire funding from the college. He said this may take a couple of months until the board decides to vote on the resolution.

Town of Ithaca considers cutting off fire services for IC