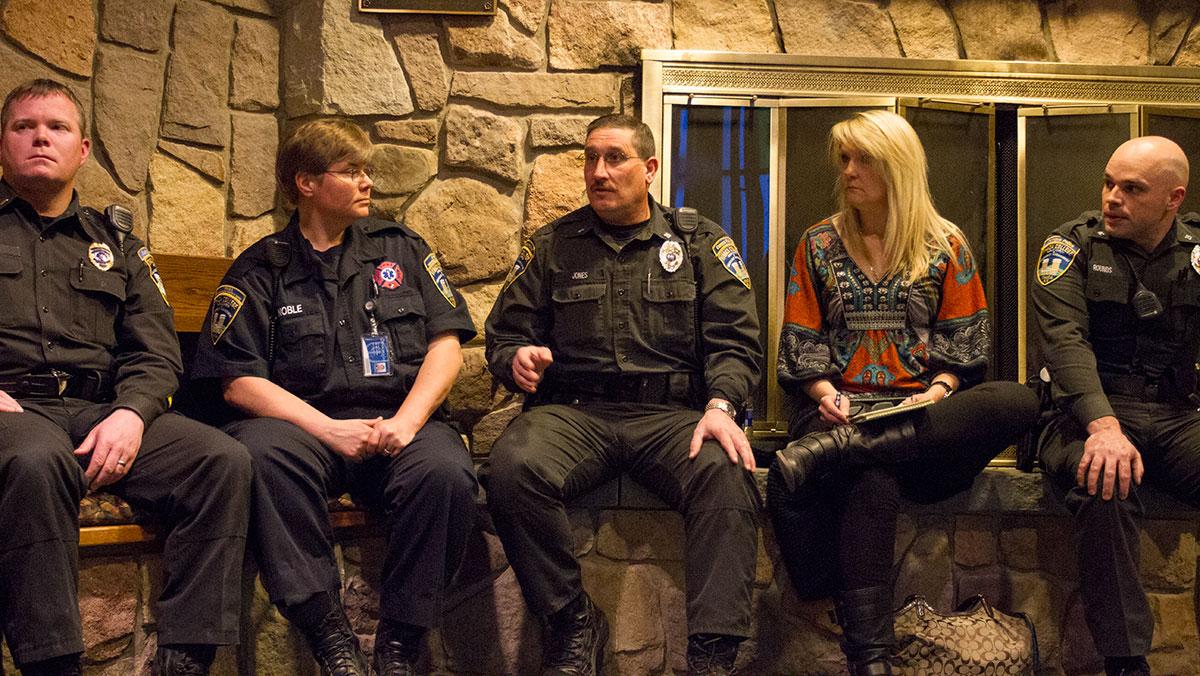 Christian Schuepbach/ The Ithacan
Robert Jones, master patrol officer, said the ideas brought up during the discussion were important ones, and the conversation provided a place to clarify the role of Public Safety officers on campus.
By Evan Popp — Staff Writer
Published: April 8, 2015

Following a bill passed by the Ithaca College Student Government Association on March 23 calling for greater accountability in the way the Office of Public Safety and Emergency Management interacts with students, measures are being taken to strengthen the relationship between students and law enforcement on campus.

These efforts manifested in an informal discussion with a group of students April 7 to discuss ways to form a better relationship between law enforcement and students, although senior Crystal Kayiza, SGA president and one of the organizers of the event, said the discussion was not a direct response to the SGA bill.

The event, which took place at Muller Chapel and was dubbed “Conversations with Public Safety,” received a light student turnout, as the number of people in attendance from Public Safety, 10, surpassed the handful of students at the forum, six.

During the discussion, representatives from Public Safety discussed a variety of different concerns and ideas about the manner in which students interact with law enforcement on campus. One of the major points that came up was student perception of law enforcement.

David Dray, assistant director and deputy chief for patrol operations, said oftentimes the perception students have of Public Safety officers stems from one negative interaction they had with an officer. He said when Public Safety interacts with students in less than favorable situations, it is difficult to cultivate a positive perception of campus law enforcement with those students.

Terri Stewart, director of Public Safety, added that she believes the majority of the college campus respects Public Safety and the job they do. However, she said in the future, Public Safety would be interested in surveying the student population to determine what the perception of law enforcement on campus really is.

“We’ve got some pretty solid partnerships across campus, but I think that clearly because of some of the questions that have come to us and some of the concerns, we’ve got some work to do, too,” Stewart said.

The perception of Public Safety on campus led to a discussion about what kind of reactions seeing law enforcement elicits from students. Students at the discussion said the reaction is often a negative or a fearful one.

Senior Kayla Young said part of this comes from the fact that students see Public Safety officers as authority figures, which impacts their ability to interact with them in an organic way.

“There’s a trigger that students, and just people in general, have when they see law enforcement, because you guys [officers] are the authority figures … I think we just automatically know that it’s not going to be an equal conversation,” she said.

Young said this causes students to look at officers purely through the lens of their job, instead of as another person.

A possible solution that was brought up to the perception of law enforcement on campus, and to the larger overall problem of student-police relations, was increased engagement between Public Safety and students.

Robert Jones, master patrol officer, said the ideas brought up during the discussion were important ones, and the conversation provided a place to clarify the role of Public Safety officers on campus.

“I think it’s important that we educate the students that we’re here for them, their safety and the safety of everybody that’s on campus, and to clear up any misperceptions of what our job is,” Jones said.

“She asked us for our feedback on what we thought students would want to see and we thought that a casual conversation would be kind of a good way to keep that conversation going,” Kayiza said.

The legislation, sponsored by SGA Class of 2015 Senator Taj Harvey, calls for increased engagement between Public Safety and students as well as more transparent communication regarding complaints made against officers by students. It also recommends that officers who have received multiple complaints be psychologically evaluated in addition to having mandatory psychological evaluations for both new and veteran officers.

Stewart said she is supportive of the bill’s efforts and excited about the prospect of forming a better relationship between Public Safety and students. She also said she has been included as part of the SGA committee working on the bill.

Stewart said Public Safety already does some of what is outlined in the legislation, including psychological evaluations for all new officers. She said the bill could be a way to clarify what Public Safety does and does not already do.

“When I looked at the bill … there are some educational opportunities here because very clearly students don’t know what we do or what kind of training we have and there’s some things here that we already do,” Stewart said.

Young said she felt the April 7 Conversations with Public Safety event provided a basis for a discussion about policing on campus, but that the issue is more nuanced than what was able to be covered in a short discussion.

“I think this was good as far as a starter, but I do also think it’s a hugely deeper conversation that goes into the structure of policing in the U.S.,” Young said. “But I commend the guys for coming, that was cool.”