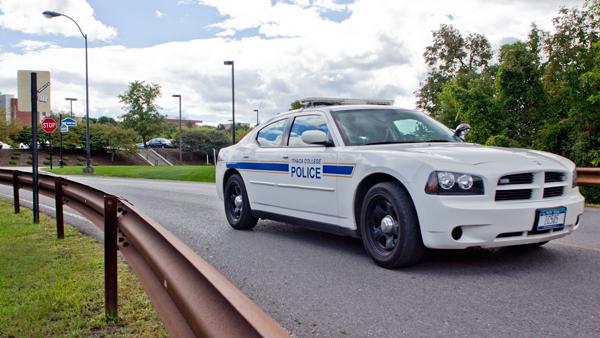 Changes to the Office of Public Safety’s patrol methods, including an increase in bike-riding officers and daytime hours for campus security, have led to more coverage of the Ithaca College campus.

Thomas Dunn, investigator for Public Safety, said three officers have been trained to patrol campus on mountain bikes. Security officers who previously would only patrol at night are now patrolling around the clock. Students in residence halls on campus, including the Circle Apartments and Emerson Hall, said they noticed what they believed to be more officers in their areas.

Terri Stewart, director of the Office of Public Safety and Emergency Management, said this increased perception at the college is one of the office’s goals.

However, higher visibility does not equate to more presence, Dunn said. The office has not added more vehicles, he said, and new recruits have been minimal, but they have made better use of their resources.

“They used to just work the night shift and they work around the clock now,” Dunn said. “So it’s just a different way to use the resources we have, on our end, in creative ways.”

“The deputy chief has been pushing the bike patrol,” Dunn said, “We held a bike school over the summer and we had three officers graduate from it. They received the additional training on the police mountain bike.”

The bike patrols are not new. Deputy Chief David Dray, assistant director of Public Safety and Emergency Management, said the program has been around for more than a decade, but more officers volunteered to go through training this year.

“We like the philosophy of community-oriented policing,” Dray said. “With someone being on a bike, they’re out there, they’re more visible than being in a cruiser.”

Senior Sophia Cardinali said she has been seeing more Public Safety vehicles on the college’s campus than in previous years.

“I feel as though I see them driving around all the time and walking around campus, especially up in the Circles,” Cardinali said.

Junior Meredith Sager said though she hasn’t noticed much change in Public Safety’s behavior on campus, she is surprised by the new bike patrols.

“It was kind of weird,” Sager said. “It’s not like a crime-ridden place where they need a lot of excess cops on bikes patrolling your every move. They’re trying to make it a safe place to be, I guess.”

At Cornell University, campus police have not expanded, but Dave Honan, deputy chief of Cornell’s police, said that campus security has temporarily extended the hours of its staff in the wake of the sexual assaults that occurred Sept. 2.

“Obviously, we’re strategic about our deployment,” Stewart said. “We’re incident-driven. We look at our data, we try to analyze where problems are and we try to be preventative and get out in front of them.”

According to the Public Safety Log, between Sept. 6 and Sept. 12 there were 49 separate reports made by officers. Of these, 12 took place in the Circle Apartments. Last year, seven took place from Sept. 2 to Sept. 12 in the Circles.

Ron Trunzo, associate director of Residential Life, said despite the increase in reports, there have been no special requests for additional patrol of areas on campus.

“We always have residential assistants who are on duty,” Trunzo said. “We increase duty on weekends just because there tends to be more activity and more things going on late at night.”

Trunzo also said resident assistants are the first responders to policy violations and they will call Public Safety for life-threatening situations or suspicions of drug use.