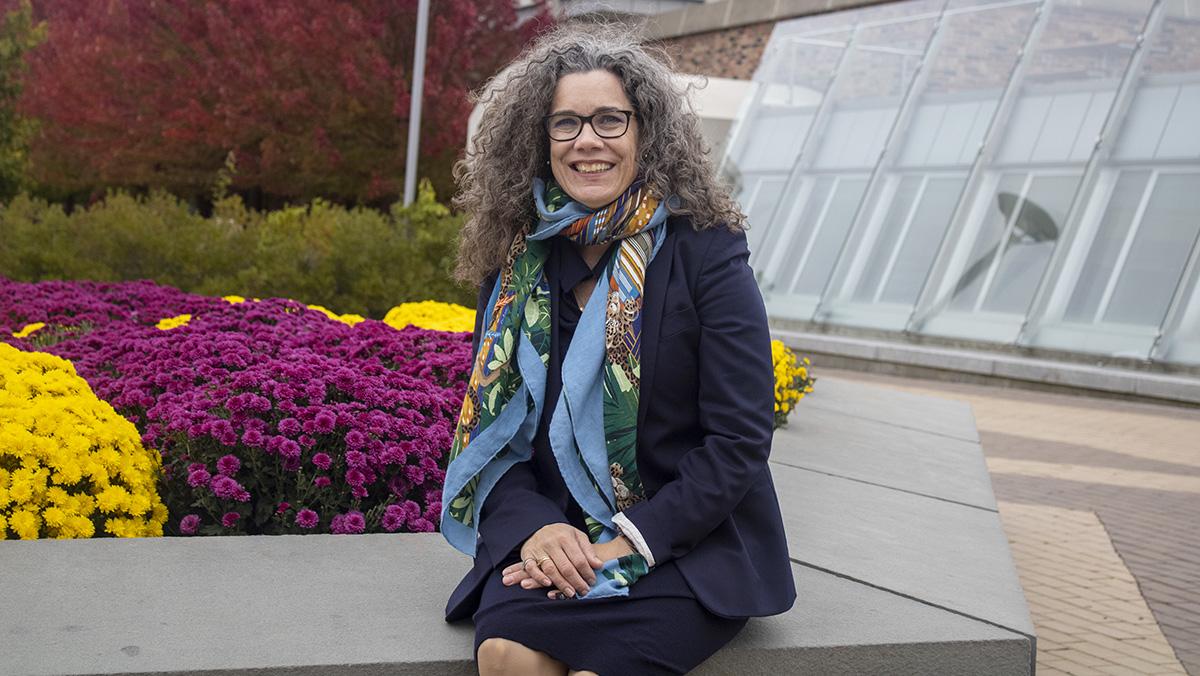 Meghan Callahan, Ithaca College London Center director, visited Ithaca College from Oct.17–20 to encourage students to join the London program and to present a lecture about a class she is teaching.

Callahan was selected as the new director of the Ithaca College London Center on March 1. Callahan has lived in Stockwell and Brixton London for 16 years and has served as the assistant director of teaching and learning at the Syracuse University London programs.

Additionally, Callahan currently teaches a class called Underground London, which dives into the history of different groups like low-income and minorities that have lived in London and how their history was hidden from the general public. The course takes a look at how these groups operate under the surface of society from the Roman era to the modern era of history. Her lecture is based on the content she teaches in her class.

Staff writer Jadyn Davis spoke with Callahan about finding ways to make studying abroad more accessible to students and about what she hopes to accomplish as director.

Jadyn Davis: What have you enjoyed the most about being the director of the Ithaca College London Center so far?

Meghan Callahan: I think, so far, it’s been the possibilities that we’re working on for Ithaca College students to come to London and seeing students come back from the pandemic. We had our first summer group and they were so enthusiastic, and we hardly even saw them because they’re always out when the classes are out.

JD: What do you hope to bring to the London Center as director?

MC: I am hoping to bring much more inclusion and diversity by widening the amount of students and student majors and students from varying backgrounds to study abroad because study abroad historically has mainly been the province of not always wealthier students, but it tends to be very white. It tends to be very woman centered, which is fine, but I would just like it to be more accessible to everybody.

JD: What do you want students to gain from studying at the London Center?

MC: One of the things that we try and do, too, is let students know that we’re there to support  them. I studied abroad at various times of my life, and I think it is the best thing you can do as a student because it just shows you what you’re capable of. A lot of [students] start to understand more about the place of Americans in the world and international communication, understanding how different cultures live and starting to be comfortable with that and a phrase that a lot of people in study abroad are using is, like, becoming comfortable with being uncomfortable.

JD: How do you feel about students studying abroad again after two years?

MC: I think that we need to get back doing that and we also need to be safe about it. And so, it’s  mandated that we wear masks in the center in the classes. And I’ve seen here that certain buildings have them wearing masks and certain buildings don’t and, you know, obviously there’s risk involved. But we’re also at a different place than we were in 2020 in terms of vaccines [and] in terms of knowledge of COVID transmission, and so we try and make it as safe as possible for students by requiring mass. We require tests for when they arrive so that they need to do a COVID test before they can come into the center.

JD: Why did you decide to teach the Underground London course? What do you hope students take away from the course?

MC: So that course I developed is because I trained as an Italian art historian and I did teach a few courses on Italian art and women’s art in London, but they weren’t really getting signed up, so I thought I should do something about London. One of my interests is social networks, especially among lower classes, and women’s history, the kinds of things that operate under the surface of society or they’re part of society, but sometimes lower classes are looked down upon or usually they’re looked down upon. The first half is about material culture. So, any kind of objects and what that can tell us about the life of people who very often have been ignored in history … the fact that they’re physically underground is quite interesting. I’m also interested in social networks and people who work against existing political systems, which became the second part. We talk about a language called Polari, which was used by gay men as a code because homosexuality was illegal. We also talk about Catholic spies because Catholicism was illegal. I guess it’s just all the things I was interested in that I then turned into a course, and it works quite well actually and the students like it.

JD: How have your experiences in fine arts and in international education prepared you for your role as director?

MC: I think that it’s a culmination of jobs that I’ve held throughout my life. … I paid for my college and the way I did that was working as a waitress and working in an accounting office. … I held all these different jobs in one building … but it does influence how you approach a job and a variety of skill sets. I’ve worked with students for many, many years, in teaching and as an administrator as well. So working with students who maybe need support in one way or another. I feel that the whole combination of jobs actually work to help me be a better director because when you’re directing a program like Ithaca, you’re responsible for a lot of different aspects.