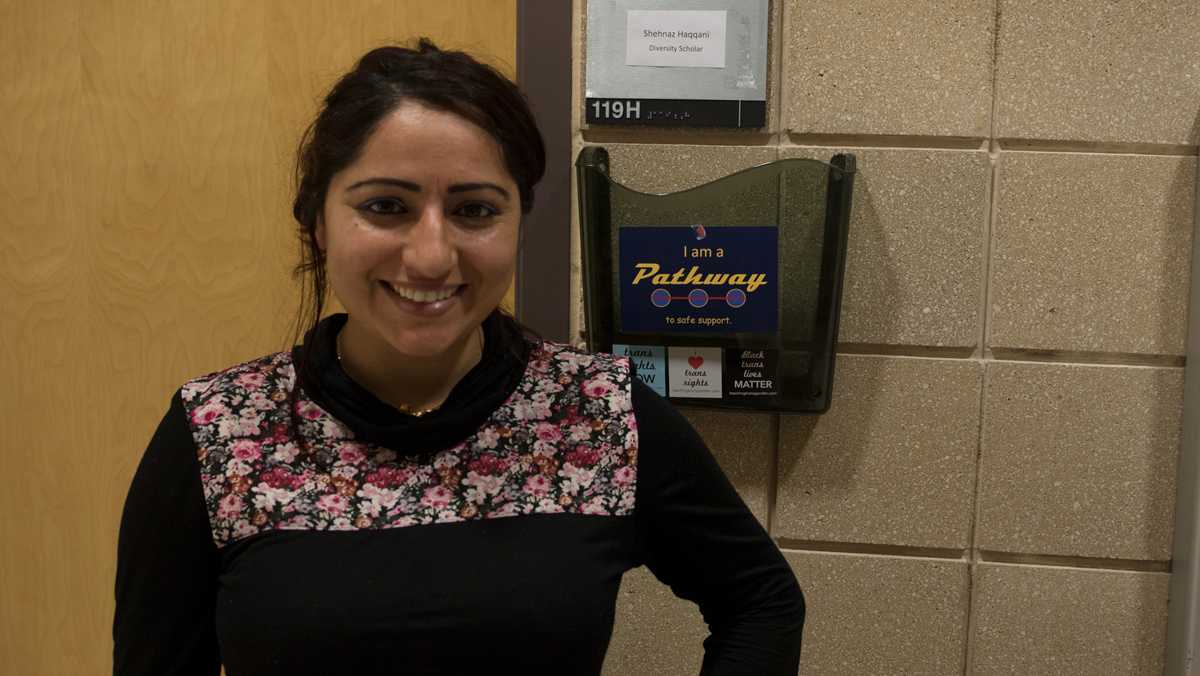 Shehnaz Haqqani, a diversity scholar fellow in the Women and Gender Studies program at Ithaca College, is working to bring attention to the intersection of feminism and religion.

Haqqani is currently working on her dissertation in Islamic studies as a Ph.D. candidate at the University of Texas at Austin. She also co-founded the online community FITNA: Feminist Islamic Troublemakers of North America. FITNA aims to create a space for conversations about Islam, feminism and sexuality.

Contributing Writer Bronte Cook interviewed Haqqani to discuss Islamic feminism, the curriculum for her new class Islam and Feminism and her hopes for the future of the Women and Gender Studies program.

Bronte Cook: What is Islamic feminism?

Shehnaz Haqqani: Islamic feminism is a quest for gender equality, gender justice and sexual justice … from a perspective that acknowledges that Islam lies at the heart of anything that Muslims do. Anything we do has to be guided by Islam. We can all disagree on what Islam means and what it doesn’t mean. We can also even disagree on what sources of Islam are more important or more legitimate than others. But Islam as the faith — as a submission to God, as a will of God — is what should motivate any efforts for social justice, human dignity and human equality. Islamic feminism just focuses on all things gender. The focus is basically what Islam says, the Quran primarily, but also Muhammad’s own life — his own dealings with women in his life, the things that he taught and the things he practiced. Many of them are still applicable. Some are not applicable because we can recontextualize them. We can reinterpret them. We can talk about what they meant at that time and then take that message. If his message in the seventh century was to revolutionize human rights or women’s rights, then in every generation, we can interpret that and be like, “In this generation, to revolutionize women’s rights would mean XYZ.” We need to make sure that we are constantly being revolutionaries.

BC: What criticisms does Islamic feminism face?

SH: One of the struggles of Islamic feminist scholars and Muslim feminists in general is we have Islamophobia on the one hand, but also from non-Muslims in general who don’t understand or who can’t imagine feminism being tied in any way to religion. … And on the other hand, we have misogyny within our own community. The struggles that Islamic feminists face from within our own community — Muslim American communities or Muslim communities across the world — is because we’re challenging the norm, challenging a heteropatriarchy and challenging the dominant ways that Islam has been historically interpreted when it comes to gender and sexuality matters. We have no authority. … When we use the word feminism and when we talk about women’s rights, we are dismissed because the majority of the Islam tradition has been very patriarchal. Women were involved, but for the most part, their contributions have been erased from history, and there’s a lot of feminist scholarship that is trying to revive that. … When we revive women’s engagement to the Quran, it’s really hard to be taken seriously when you are challenging what the majority of the muslims seem to consider inherent to Islam, which is patriarchy and gender inequality.

BC: So you’re currently teaching Islam and Feminism, a class that satisfies a requirement for the Women and Gender Studies minor. What do you think is important for people to know about this class and the concepts it incorporates?

SH: The idea is to expose my students to think beyond secular feminism. I want them to see that there are multiple forms of feminism … really to get them to start questioning and interrogating their own ideas of what is gender equality, what does justice look like — and whose feminism gets to count. In much of the Western feminist discourse, religious feminism has not been a part of the conversation. Muslim feminists, and other feminists of faith, write a lot about their experiences being academic feminists and about the fact that there are very little spaces that recognize their existence. Much of academia for the last few decades has been very antagonistic to feminists of other backgrounds. The idea really is to expose my students to another kind of feminism, to expose them to Islam. … We’re talking about women in public spaces and Islam’s different positions on that. We’re going to talk about LGBTQ issues. Coming up, we’re going to talk about some very Muslim feminist issues like women leading prayers, feminist issues like abortion and about definitions of Islamic feminism.

BC: What knowledge or concepts do you hope to bring to the Women and Gender Studies program here at Ithaca College?

SH: I focus a lot on Islam and gender, and on Islam and religion in general. The Women and Gender Studies department is very interdisciplinary — everyone is from different programs and departments. I’m hoping to bring in the focus on Islam — the focus on religion, really. I could do something on religion and gender, on religion and sexual diversity. Religion is very important to many people in the world, and that perspective is often lacking in a lot of spaces. In spaces that are focused on religion, the gender aspect is often missing, and then in spaces that focus on gender, the religion aspect is often missing. The idea really is to elevate existing conversations on Islam and feminism and get people to appreciate the kind of work that Muslim women are doing.

BC: Is there anything else you want people to know about your work with Islamic feminism?

SH: I mentioned that there are very few spaces that acknowledge and respect Muslim feminism, and online is where much of it is taking place. So my friends and I co–founded this online community called Feminist Islamic Troublemakers of North America: FITNA.The word “fitna” in Arabic means “disruption, chaos, and corruption,” and was historically attributed to women. We are recreating our rightful title as fitna. FITNA has all kinds of conversation on gender, feminism, sexuality and Islam, and I think that it is one of the most beautiful spaces where you can see that Muslim feminists are not all in agreement with each other. Of course, there is the idea that gender justice should be at the root of Islam, but beyond that, there is very little on what that means and what gender equality really means.

Marzia Zafarzada Bahir, Arezo Qanif and Hasina Safi, all traveling from Afghanistan, were scheduled to begin their 2010 Leadership Training program with local nonprofit Institute for Circlework on Thursday. But Safi was the only one of the three to successfully have her visa request approved and be able to attend the training program.

LGBT Muslims may face a difficult balance between sexuality and religion. The mainstream interpretation of the Islamic holy book, the Quran, condemns homosexuality. Faisal Alam, the founder of Al-Fatiha, a Muslim LGBT group that works to help LGBT Muslims deal with their struggles with their faith and their sexual orientation, has traveled to colleges and…