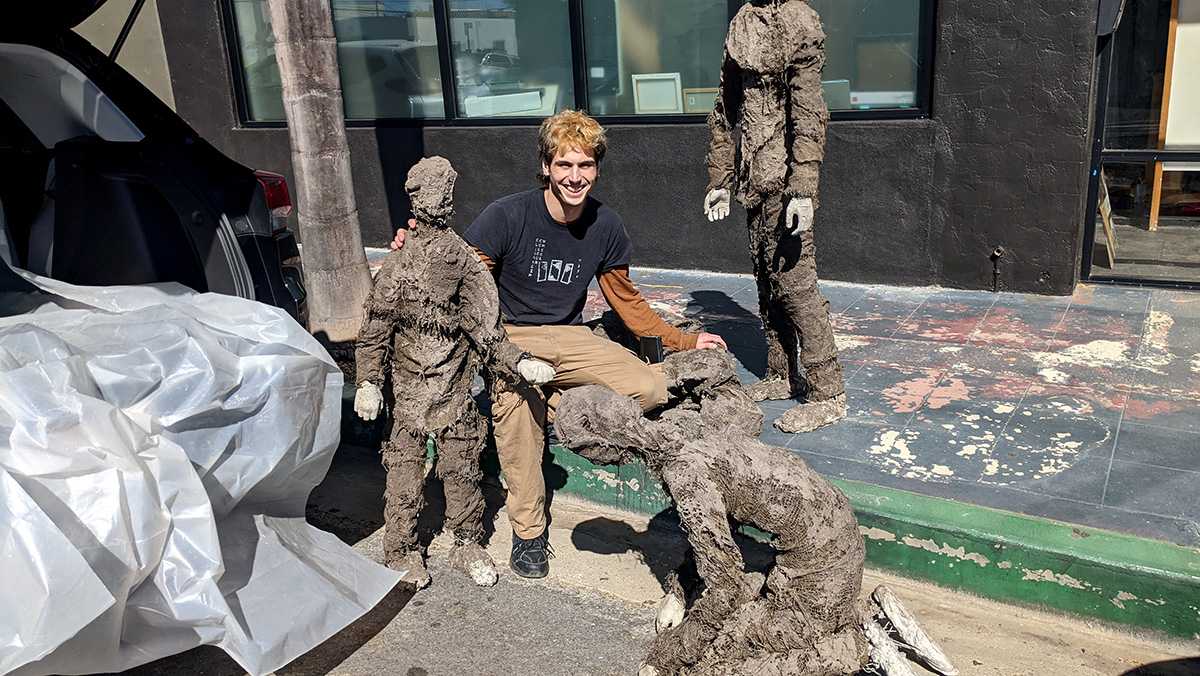 Courtesy of Andrew Lackland/The Ithacan
The sculptures were part of a 13-piece series made by IC alum Andrew Lackland ’21, with the intention to create conversations about climate change.
By Jadyn Davis — Staff Writer
Published: March 30, 2022

A set of human-like sculptures made with mud and burlap, were found placed around the City of Ithaca in January. The sculptures were part of a 13-piece series made by an Ithaca College alum Andrew Lackland ’21, with the intention to create conversations about climate change.

Lackland majored in art at the college and displayed their sculpture series in the Handwerker Gallery in May 2021 while they were still a student. They posed some of their pieces around Home Dairy Alley, Ithaca Falls and the Route 13 overpass in January before they were quickly removed. Lackland also has had their pieces on display since October 2021 at a gallery in Los Angeles, California. The inspiration to have the sculptures in outdoor environments came from an idea of Lackland’s to have viewers perceive the pieces in different contexts.

Staff writer Jadyn Davis spoke to Lackland about their time at the college, the inspiration behind this sculpture and their thoughts on receiving recognition from the college.

Jaydn Davis: How did climate change play a role in the inception of these sculptures?

Andrew Lackland: So climate change is definitely a really big thing that I was thinking about … I really was interested in how I could put a more extreme or impactful or emotive situation for people to maybe grapple with that [climate change] in a bit more of a personalized way instead of a detached frustration sort of way. It’s a real thing that is already influencing major global systems and also — was sort of hoping to demonstrate or get at with these figures — is not just the global systems aspect of things, but also getting down to like the individual level. And being able to create people to demonstrate and form that. The reason that I was choosing climate change is it’s going to influence everyone in the world — is already influencing everyone in the world — even if it’s coming around in a very detached sort of way.

JD: Why did you decide to use mud and burlap as materials?

AL: ​​Mud was the main surfacing agent or component that I used. I used burlap to get the form to make a surface and then it’s mud and clay and stuff like that. I made up a pretty particular concoction of things to make it really sort of lock on there. The full range of materials that I used was wire fencing, to do the frame inside of it and then cement to do the feet and cast the hands because they’re all real peoples’ hands that I casted to get in really particular positions. I was interested in how I could put a more extreme impact or sort of an emotive situation for people to see. I was sort of hoping to demonstrate the global systems aspect of things.

JD: After graduating a year ago, how does it feel to get recognition from the college for your sculptures ?

AL: I gained a lot from the program and the people that I encountered at Ithaca College. … I was lucky enough to have really great staff. I was trying to get more funding … and I was actively getting in the faces of the administration when I was there. I started running petitions and getting people to sign things and I was talking to the administration about how they weren’t upholding their end or expectations of providing funding and things like that for the art department and kind of for lots of departments, but that was really what I was trying to hammer home. … The response that I’ve gotten has been really surprising and amazing. I don’t know if this is really the case but I do wonder if maybe Ithaca College sees this as an opportunity for them to bolster the reputation of their art program, which is great, but then there’s also some part of me that’s like, ‘You guys actually have to do something now and put more money back into [the Department of Art].’ I hope that in some way this would come around to them feeling like [art] is something that they should invest in.

JD: What do you hope people take away after looking at this sculpture?

AL: I feel like my biggest hope is for people to sort of actualize the sincerity of these circumstances as they relate to not just ourselves in this moment, but also projecting into the future a little bit. … I look to novels a lot; in novels, there’s a way of writing around a bigger idea that is a takeaway. There’s a story that’s fabricated around a truth that exists or a projection into the future. That’s kind of how I would hope my work could function. In some ways, I’m writing fictitious narratives. I’m creating people that don’t exist, in circumstances that are fabricated. But from that, I would hope that people can be like … ‘What is this alluding to in terms of our future?’ I don’t really want people looking at them so much as I would like people to stand or walk with them. I want you to feel like you’re next to a person and that person is in the circumstances that they’re in and then what does that imply about where you as a person are in that moment?