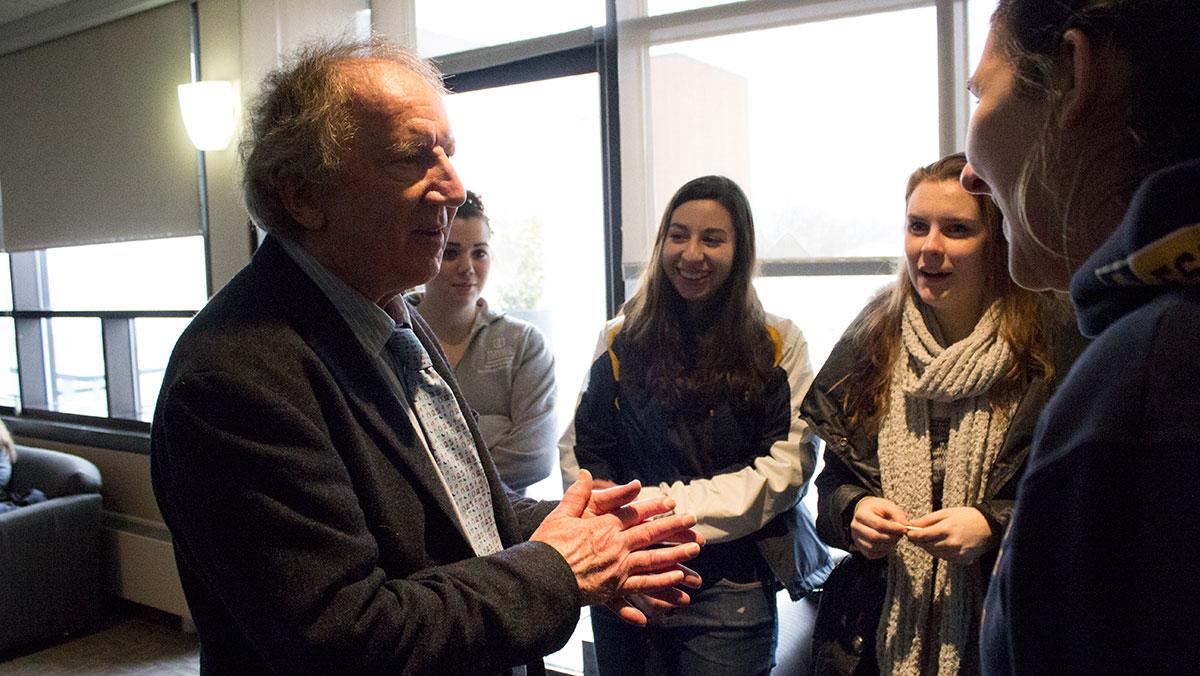 Kellie Hodson/ The Ithacan
Bill Sheasgreen, director of the Ithaca College London Center visited the South Hill campus with his wife the week of March 16–20 to provide assistance in the summer and fall program orientations.
By Maura Aleardi — The Ithacan
Published: March 24, 2015

The director of the Ithaca College London Center has announced his plans to retire after 18 years in the position and a total of 40 years with the college.

Bill Sheasgreen visited the South Hill campus with his wife the week of March 16–20 to provide assistance in the summer and fall program orientations. The college hosted two coffee talk receptions for Sheasgreen on March 20, one for students in Klingenstein Lounge and one for faculty and staff in the Dillingham Lobby.

Staff Writer Maura Aleardi spoke with Sheasgreen before the student coffee talk to discuss his promotion to the director position, the current state of the London Center and his passion for teaching.

Maura Aleardi: How did you come to the position of director of the London Center?

Bill Sheasgreen: I was a lecturer at the London Center since 1975, and in 1997 they asked me if I’d take it as an interim position, so Ithaca College knew me because I’ve been working for the college as a lecturer for 22 years, and became interim director, then the full director in 1997 to 1998.

MA: Was your passion history?

BS: I’m a historian. Once you’re a historian, you’re always a historian. I like the past, I like teaching, I like reading. It’s the best subject in the university as far as I’m concerned.

MA: In your years as director, how has the London Center evolved?

BS: We always have had good quality students, but students are very high quality now. Lecturer turnover — we’ve got some new dynamics of lecturers who are with us now. There’s a lot of continuity. I’d say in some respect there’s been more continuity than there has been change because we do trips, and they’re more or less the same trips. We have fewer staff now, so it’s been more difficult for us, but the college is requiring us to, right across the board both in New York and here, requires us to be sort of more economical to students than we can afford. It’s still very much the same. It hasn’t changed an enormous amount since I took over as director.

MA: How did having fewer staff change the nature of your job throughout the years?

MA: Why do you have fewer staff now?

BS: The college requires us to be as economical as possible, so we’re cutting back on the opening hours a little bit, but at the same time we’re still fulfilling the educational functions we have, it’s just there’s more for us to do as a smaller number of staff, that’s all.

MA: How are you coping with having fewer staff?

BS: We manage. It can be stressful — if somebody’s off sick, it’s difficult. We’re not the only program that does that. … In some respects, if you have too many staff, it doesn’t work. We’re trying to use the staff to cover more territory, we’re not open on as many Saturdays, so we’re cutting back on areas that are less essential to the program.

MA: How do you work with other study-abroad centers, if at all?