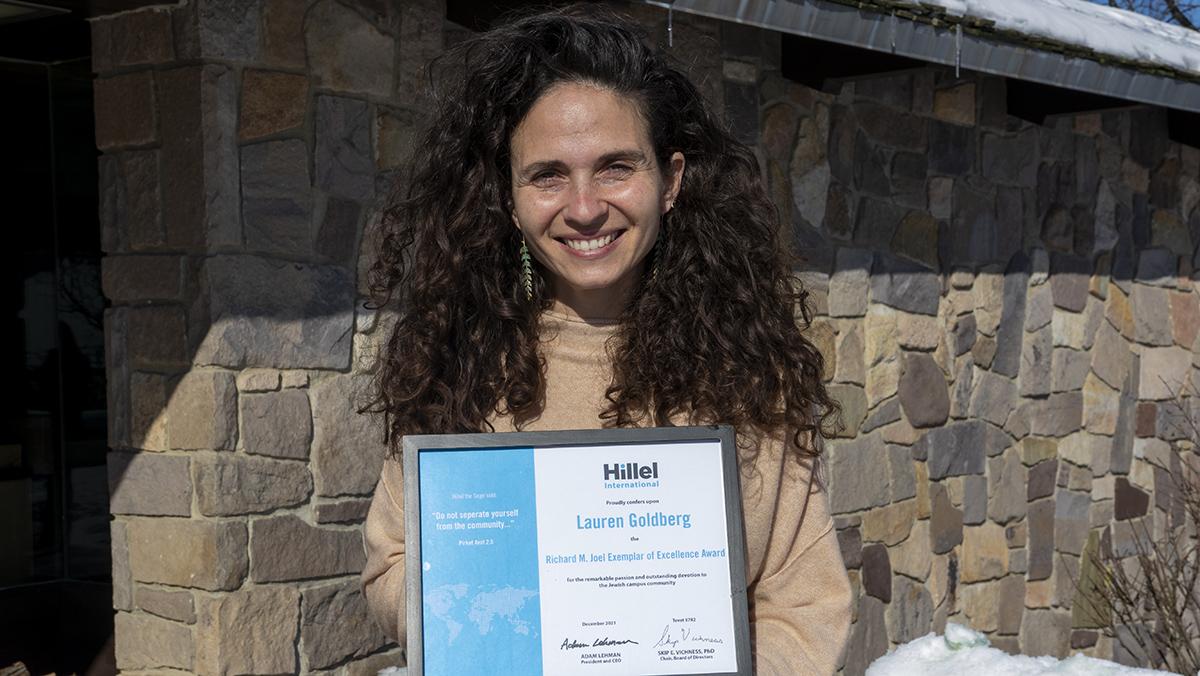 Lauren Goldberg, interim director of Religious and Spiritual Life and executive director of Hillel at Ithaca College, was one recipient of Hillel International’s Richard M. Joel Exemplars of Excellence Award in 2021.

Every year Hillel International selects recipients for the award. This honor is awarded to individuals who exemplify an outstanding commitment to Hillel on their college campus community. Hillel is the largest Jewish student organization in the world supporting more than 550 colleges and universities. It aims to create a visible and positive Jewish presence on campuses, participate in interfaith and multicultural activities, and work with other organizations in the Jewish community.

Staff writer Jadyn Davis spoke with Goldberg about what the Richard M. Joel Exemplar Award means to her and the influence that her mentors and the Hillel community have had on her.

Jadyn Davis: How does it feel to receive this honor?

Laura Goldberg: To receive such a respected award from my peers — I felt so seen; not only in a professional realm, but also in the work that transcends what a typical professional job is. It was overwhelming to feel so seen, especially in such a moment of feeling sometimes so siloed like we’re in right now. I think although I’m situated in Hillel primarily, one of the great things about this job is that it transcends all faith communities, non-faith communities [and] individuals on campus.

JD: What has been the best part of being executive director of Hillel [at the college]?

LG: I’ve been a part of the Hillel movement for over 10 years and five of those were spent being the director at the college. I think I take seriously the idea of the divine spark in each and every person. I think that the space that we call Hillel is like a palette where we can co-create something together and I think our students have taken up what it means to be part of the organization and made it their own.

JD: Who is someone that you consider a role model for your work?

LG: My teacher Rabbi Danielle Leshaw is one of my greatest role models. They were my boss for years and really taught me what it means to be a steward of a community. I would say my other greatest role model is Cantor Abbe Lyons, and I consider her one of my greatest teachers … finally, Aviva [Zucker Snyder], my campus support director, has been such a blessing for me from the hiring process to helping me grow over the last five years.

JD: Was there a community similar to [Hillel] that you supported beforehand?

LG: When I was in high school I was coming out of the reform movement and the reform movement had a few youth groups affiliated, and so I participated in a regional youth group movement. [However], when I went to a college, we didn’t have on our campus at that time a fully operational Hillel. Unfortunately for me, my college years were really a gap in this kind of realm of identity development … We didn’t have it where I went and that was a huge loss in my life and this can be a huge springboard [for students] into their Jewish identity post-college.

JD: What qualities do you think a recipient of this award should have?

LG: I think that so many people feel unseen in their work and it can be self-perpetuated sometimes if you’re not being mentored and cultivated by somebody … primarily women took note of me as a younger professional and helped me grow in the next steps of my professional career. I was essentially raised by multiple generations of women who invested time and resources in growing me as a professional ….

LG: We’re always looking both at the urgent things for now and where we can grow in the long term. This year our main focus is wellness for students. We want to be at the intersection of student life so that they know this is a space that is completely committed to helping them be well … that is coming from our Jewish values and is totally informed by them.