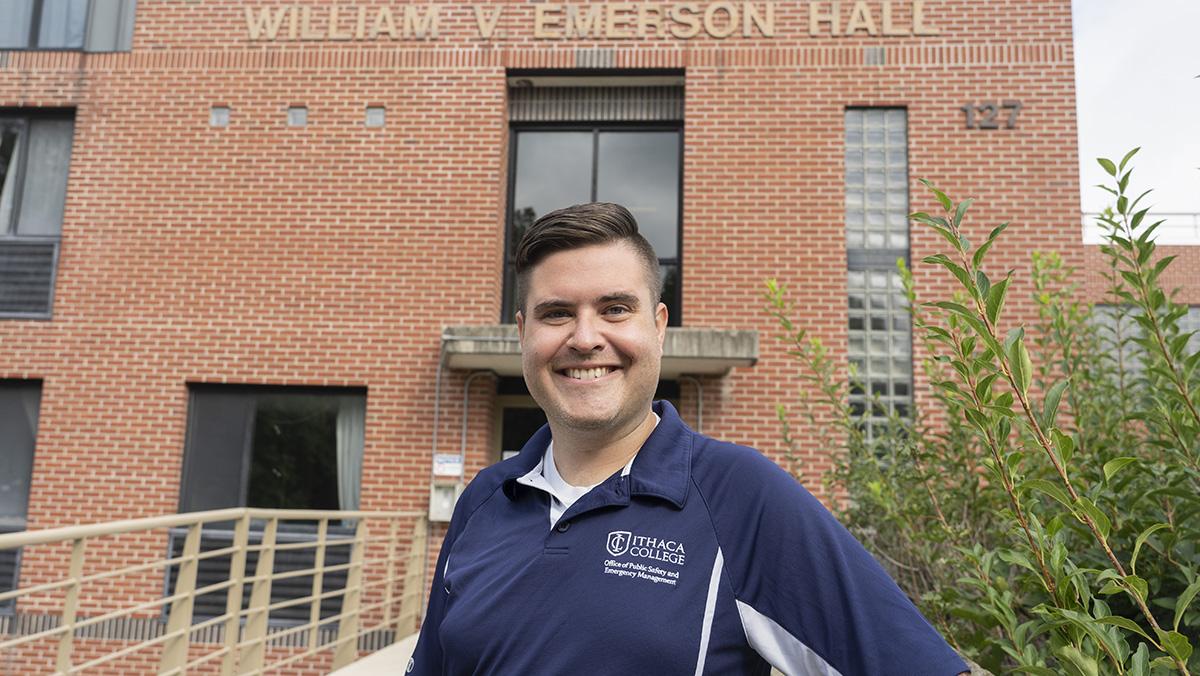 Surina Belk-Gupta/The Ithacan
Swarts said his job is to plan for any kind of emergency the college community might face, like natural disasters, pandemics or other major threats.
By Caitlin Holtzman — News Editor
Published: September 22, 2021

Samm Swarts was named the assistant director of emergency preparedness and response for Ithaca College on May 13. Swarts is the first person to be in this position, which is housed within the Office of Public Safety and Emergency Management. Swarts said his job is to plan for any kind of emergency the college community might face, like natural disasters, pandemics or other major threats.

News editor Caitlin Holtzman sat down with Swarts to discuss his plans for the position and the college’s response to the COVID-19 pandemic.

Caitlin Holtzman: What drew you to this position?

Samm Swarts: So previously, I’ve worked in [the Office of Residential Life]. My entire career up to this point has been in residence life … and my educational background is in management itself. So I’ve always definitely taken on roles and positions that coincide with my education, but I’ve always realized at the same time that residence life wasn’t going to be longterm for me, as well. And so I actually had a conversation with Bill Kerry [executive director of the Office of Public Safety and Emergency Management] about three years ago … I had mentioned that I was really interested in being more in emergency preparedness, potentially working for [Federal Emergency Management Agency] one day. And then he called me, he was like, ‘We have this new position that we’re getting started here at the college, assistant director of emergency preparedness and response.’ … And that’s kind of how it all started and then we have this thing called a pandemic … that’s really been the majority of my work thus far.

CH: What was it like coming into this position in the middle of a pandemic?

SS: I think that it was actually relatively easy, just for the simple fact that I was already doing work within the pandemic response. Myself and Alex Devers, Student Health Emergency liaison coordinator, were wraparound care managers and so we were overseeing the quarantine and isolation processes at Emerson Hall. And then, when Christina Moylan went back to her role on the academic side, we really needed a person who would oversee the pandemic response even further. So it was a relatively easy transition.

CH: What are some of the things that you hope to bring to this position along with a lot of the pandemic response you have been doing, but also in emergency preparedness?

SS: The college is really trying to get ourselves to where we are fully prepared in the event of a large-scale emergency. This work has been going on well before I stepped into my role and my role is really to help further along those plans and develop and maintain those plans. Once we get outside of the pandemic, my hope is that I will actually be able to get my feet really thick in the mud of that work and to really develop our emergency preparedness plans for the college even further … I’m excited to work with new campus constituents to get them prepared.

CH: While the college is beginning its return to normal again, some students have concerns regarding contact tracing, quarantine protocols and especially surveillance testing. Do you think you can touch on each of those things and what the protocols behind them are?

SS: I fully recognize that our campus climate is a little hot right now. There is a high anxiety level as we returned to campus in the fall. … We are really focused on the COVID pandemic and we’re seeing a lot of high cases return. … What we know is that, while there was a few weeks ago, a pretty large increase of COVID cases, we are starting to come back down once again. … We did reinstitute our randomized surveillance testing and so we take about 600 folks per week to undergo that process. It is a voluntary process, so if you are selected, it does not mean you are mandated or have to surveillance test, but it is certainly an option. … In terms of quarantine and isolation, all of our practices, policies and procedures that we had from the spring are still in place. … I think you have probably heard me talk about this before, we are at 99% vaccination within our student population.

CH: Do you think you could talk about the reasoning behind making the randomized testing voluntary rather than mandatory?

SS: Our student population is 99% vaccinated and there is no current CDC [Centers for Disease Control and Prevention], state or local recommendation that says we should be testing our vaccinated population at this time. The reason we went ahead with voluntary is because, again, there is not necessarily a reason why we want to do it, but we want to create an option for those who would like to test to be a little bit more at ease … we did not want to make it mandatory because there is not really a need to make it mandatory at this time.