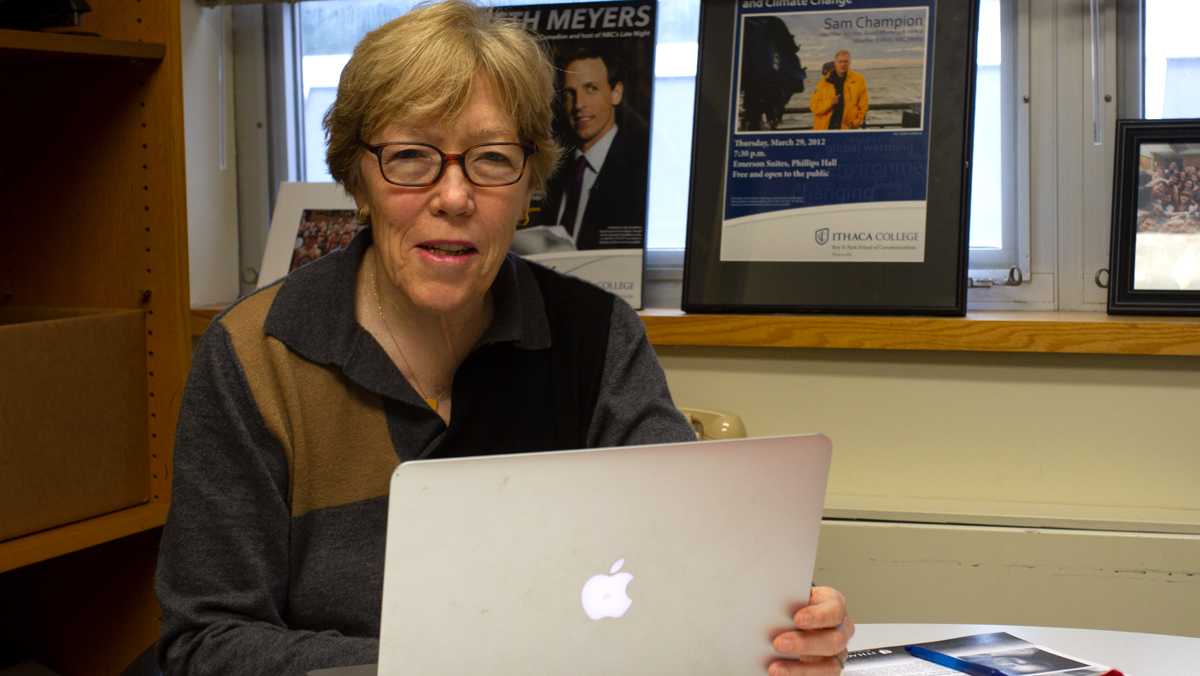 Sairam Reddy Potlapadu/ The Ithacan
Brooke Bailey Johnson came to Ithaca College as a Park professional in residence from Oct. 1–4. She is the former president of Food Network and previously worked at ABC and A&E broadcast stations.
By Ryan Bieber — Contributing Writer
Published: October 7, 2018

Brooke Bailey Johnson, former president of Food Network, recently visited Ithaca College as a Park professional in residence to share her knowledge in the fields of communication and business. Johnson visited classes and hosted open office hours where students could ask questions and receive advice from Oct. 1–4.

Johnson has a bachelor’s degree in English literature, a master’s degree from the Medill School of Journalism and decades of experience in the television business. Throughout her career, she has worked at ABC and A&E broadcast stations, and she is credited with laying the foundation for the History Channel. Contributing writer Ryan Bieber sat down with Johnson to discuss her career in the television business, factors that contributed to her success and her advice for college students.

Ryan Bieber: What prompted you to get into the television business?

Brooke Johnson: My dad was a TV producer. I grew up in Los Angeles, so it was all around me. It looked like fun, and I didn’t find anything different in college that I wanted to do. So I kind of went into the business that I was surrounded by as a kid.

RB: How did college play a role in your professional development?

BJ: One, I met a lot of friends who helped me throughout my career. But the most important thing was going to journalism school, where I learned how to write concisely and clearly. It is such a useful skill whatever career you go into but particularly in the media business. It’s shocking how few people can write a straightforward piece of prose.

RB: You pioneered hit ideas such as the History Channel and the American version of Iron Chef. How were you able to continually stay ahead of the trend and know what your audience was looking for?

BJ: I think each situation was different and peculiar to itself. The History Channel, even though I’m given credit for that, really anyone could have had that idea. We had a lot of historical programming on A&E. It was inexpensive and … very popular. Along came a time when the cable operator wanted to add a new channel. We could just move all that programming over to the History Channel. It didn’t take a rocket scientist to figure that out. Iron Chef America was more … that I had the benefit of a fresh perspective. When I came to Food Network, it was dominated by culinary people. I made the simple deduction that the show [Iron Chef] would do better if it was in English as opposed to Japanese.

RB: How much of a role does luck play in people’s career?

BJ: I think luck plays a huge role in anybody’s career. Doors have to open at the time you’re standing in front of it. Once in a while they do, and once in a while they don’t. That’s just pure luck. I always say that there are three factors to a career of success. They are luck, talent/brains and drive. If you have two of those three things, you can be successful. But I would never downplay the role of luck and … drive. You have to really want it. You’ve got to work hard. You’ve got to be aggressive and pushing all the time.

RB: As a woman, were you ever treated differently in the workforce? What advice do you have for women entering the field of communications or the workforce as a whole?

BJ: Personally, I didn’t face a lot of discrimination. The number one thing is to be more aggressive than you are comfortable being. Women, as a gross generality, tend to be a bit more, ‘If I just do my work, I will be recognized for this.’ And while there is some truth to that, you are ultimately competing for jobs as you go up the pyramid. Higher-ups notice the lower-downs who reach out to them.

RB: You are arguably most well-known for your work at the Food Network. Do you see your presidency there as the defining moment of your life?

BJ: I would say so. I had a lot of success when I was at A&E, but Food Network just exploded while I was there. It became such a sort of icon of popular culture. … It was just super fun to be part of that. It’s certainly the job I enjoyed the most.

RB: What advice do you have for college students going into fields of communications and business?

BJ: Getting the first job is the hardest. You just have to work like a dog to get that first job. Once you get that first job, look at what the enterprise is trying to accomplish and how you can help them … as a whole. Work hard and prosper.

RB: Who is your favorite Iron Chef?

BJ: I’m probably closest to Bobby Flay because he’s been at the network forever, and he’s a really good guy. I really admire Alton Brown because he is the smartest. He was clearly the glue that kept that show together. Without Alton, it would not have been the same show. Chefwise Bobby, talentwise Alton.