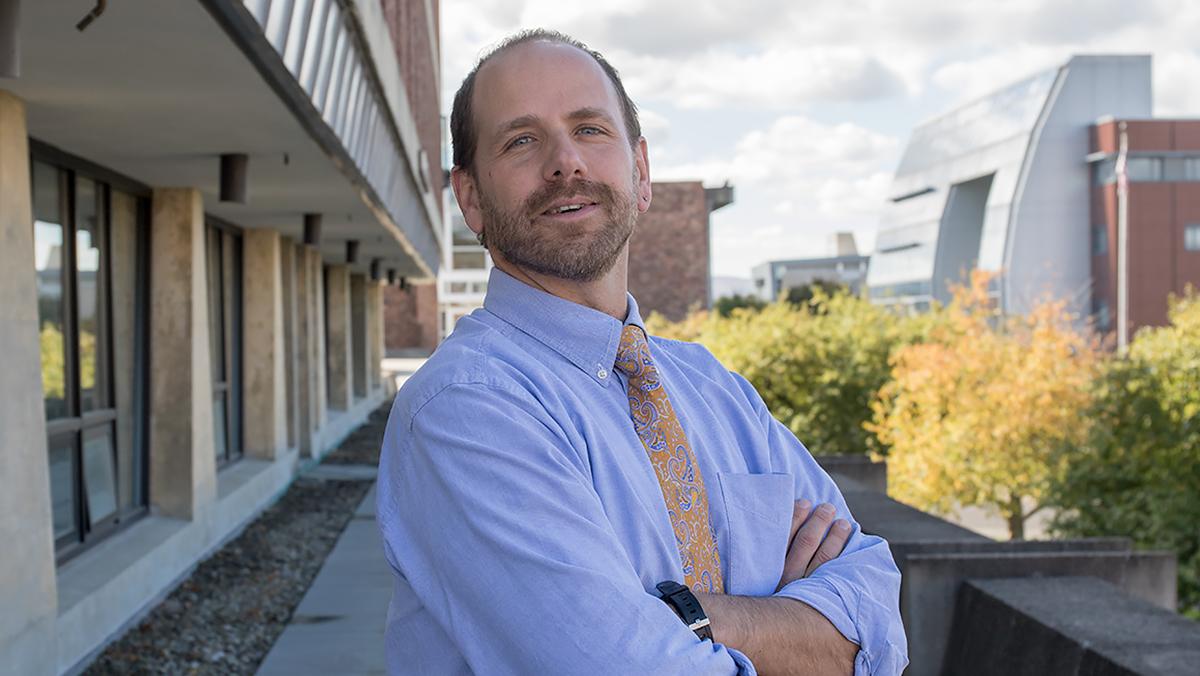 File Photo/The Ithacan
Thomas Pfaff, professor in the Department of Mathematics, has interacted with Ithaca College administrators often as the former Honors Program director for three and a half years and as a faculty member.
By Madison Moore — Staff Writer
Published: November 13, 2017

Thomas Pfaff, professor in the Department of Mathematics, wrote about why he believes administrators need to slow down their schedules in order to build relationships with faculty, staff and students in his latest article for Inside Higher Ed titled, “The Need for Slower Administrators.”

Pfaff wrote that an administrative slowdown would help to create trust and foster creative new ideas to help advance college communities. Pfaff has interacted with Ithaca College administrators often as the former Honors Program director for three and a half years and as a faculty member.

Staff Writer Madison Moore spoke with Pfaff to discuss his article and how his theory affects Ithaca College.

Madison Moore: Can you explain what the slow movement is and how it applies to higher education?

Thomas Pfaff: I compare it to the Slow Food Movement, where people decide to stop eating fast food … I kind of use that as an analogy for higher ed. I’m not sure higher ed is unique here, just the administrative class is at a point where it seems to be so busy it’s not paying attention to the things maybe it should be paying attention to.

MM: Can you explain how the lack of casual or general interactions with administrators is detrimental to Ithaca College?

TP: I don’t think it’s unique to Ithaca College, it’s a general statement, really … you wind up without trust, you really don’t have relationships with the class of people, and I think it’s faculty, staff, students. It’s very similar, it becomes a lack of trust. You don’t have these conversations. You don’t know what they’re thinking. You’re not friends in any way. They are just somebody who works in an office somewhere. I think that lack of trust then kind of rolls into sort of a lack of a shared vision or shared purpose, so then, in some sense, the administrators do what they do, the faculty do what they do and the staff do what they do, and the lack of informal conversation winds up with them living in separate universes on the campus. In the end, I think those things roll into poor decision making on the part of administrators.

MM: Can you explain the campus culture under Tom Rochon’s presidency?

TP: Well, I don’t want to make it an issue of the president, I don’t think it’s just simply the president. There are a lot of administrators on this campus beyond the president, whether they be deans or provosts or whatever. It’s a general statement about administrators, not the head administrator … I mean, I understand that there is … more regulation and legal issues you have to pay attention to. We built a facility called PRW (Peggy Ryan Williams Center) now, which moved all administrators sort of far off into the corner of the campus … for … convenience for them, but it also took them away from the campus … I guess I wouldn’t be surprised if you see similar things where the people up at the top get so busy that they are disconnected from the people that are doing the job day in and day out, and that creates a disconnect and a culture of mistrust and the things I said —  before not making good decisions, not moving the institution forward in a positive way.

MM: Do you think this climate may change with the new inauguration of President Shirley M. Collado?

TP: I think it’s somewhat too early to tell; it certainly seems to me that Shirley is someone that has these conversations, or at least wants to have these conversations. I sense that she is someone that recognizes the importance of them. I also recognize that the president is not, generally speaking, a highly visible person on campus all the time. They have responsibilities with development and external audiences that they can’t be here every day. With that said, I think Shirley certainly opened her doors; she’s had office hours, she’s had lunch and breakfast with people. She’s doing everything she can this year to get to know the community and have these conversations … I do think we are limited by architecture that it really isn’t easy for faculty and staff … to interact with each other. If you look around campus, faculty, staff and administrators don’t have really any space. I mean, if your workday as an administrator is over in PRW, when do you run into people? When do you have these hallway conversations? We’re stuck with the architecture that we have and we’re not going to change it quickly, so that means you have to almost put purposeful energy into, “Well, how do I have these things happen?”

MM: What steps do you think Ithaca College needs to take to address this issue and encourage causal interactions with administrators?

TP: I think the space is, from the faculty-staff standpoint, really problematic, that there really isn’t space that you can go and have conversation with faculty or staff or administrators. That lack of a faculty–staff coffee house, so to speak, is really problematic. Maybe we need another administrator to spread the workload out so they have a little more time to interact with people. I would also question the impact of phones and social media. … So, how’s the social media and the modern pace of life negatively impacting their ability to interact with other people.

MM: You talk about having hybrid roles for more faculty to take up administrative roles on campus. How do you envision this working?

TP: Maybe they are people that have a certain administrative responsibility while, at the same time, being a teacher still. So they’re still going to faculty meetings, interacting with students. … Those are difficult positions, and the Honors Director was one of them, where you had that, but maybe that’s a way to kind of build some bridges between faculty and staff.

Faculty and staff presented a letter to the Board of Trustees at its May 19 reception, asking the board to conduct a performance review of provost Benjamin Rifkin.

Faculty group presents letter to Board of Trustees