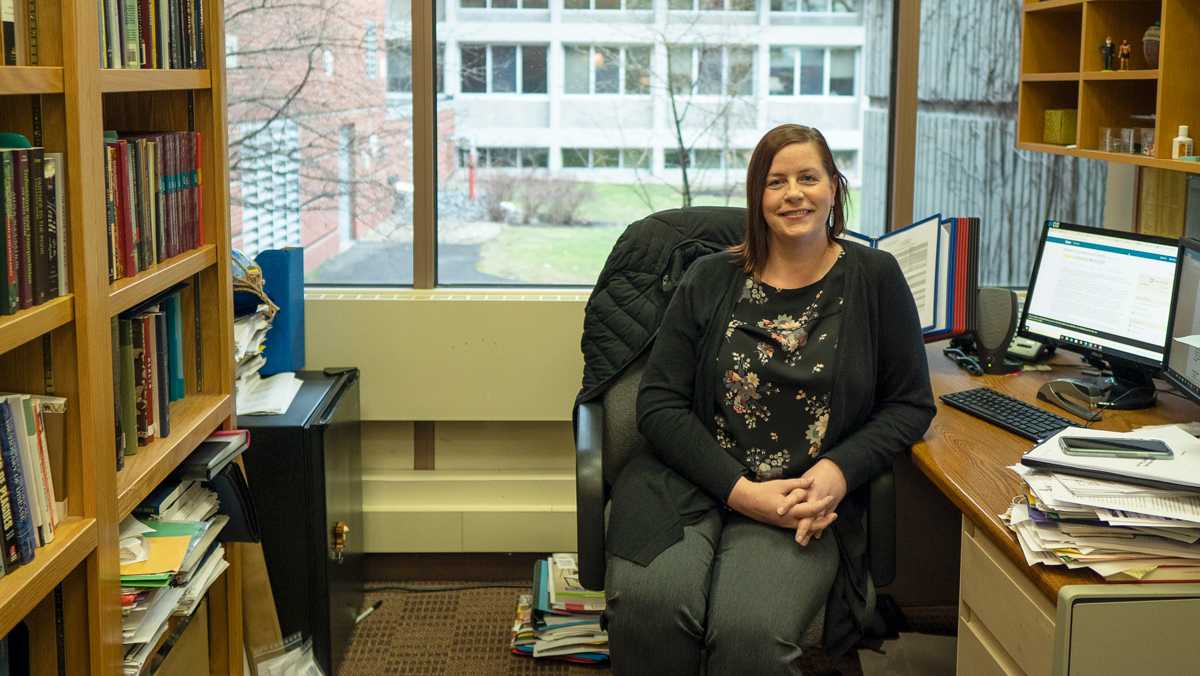 Lucas Cavanaugh/The Ithacan
Jennifer Muller, associate professor and chair in the Department of Anthropology's article discusses the impact structural and cultural violence within the bioarchaeology field. Bioarchaeology is the study of archaeological remains with the intent of drawing conclusions about human life.
By Diana DeLuca — Staff Writer
Published: March 4, 2020

Jennifer Muller, associate professor and chair in the Department of Anthropology, published an article on the importance of moving away from cultural violence within bioarchaeology.

Muller’s article discusses the impact structural and cultural violence within the bioarchaeology field. Bioarchaeology is the study of archaeological remains with the intent of drawing conclusions about human life. The article was written for a thematic series in the January issue of “Historical Archaeology.”

Staff writer Diana DeLuca sat down with Muller to discuss her work and the importance of cultural awareness, inclusivity and diversity in the bioarchaeology field.

Diana DeLuca: How did you get involved with writing the article?

Jennifer Muller: Initially, I was asked to peer review every article as a collection of articles. So, the standard is for each article to be peer–reviewed, and then if it’s a thematic series, somebody reviews all of them as a collection. That’s what I had done. Then I guess they really liked what I had to say and how I kind of brought everything together, so the editor of the journal asked if I’d be willing to write the commentary. The idea is that the author’s generally don’t know who will be writing a commentary piece for the series so at least that’s how we do it in bioarchaeology.

DD: In your article, you wrote a story, and it centered around disrupting cultural violence. What does that mean and how does it relate to bioarchaeology?

JM: So it’s foundational to my research, but I also talk about it a lot in my courses. This idea of a triangle of violence, which was presented by Johan Galtung in 1969 and then in 1990, it’s a paradigm, it’s a way of looking at violence. The three different kinds of violence are structural violence, direct violence and then cultural violence. Direct violence are those things that we think about in terms of violent acts like murder, genocide and rape, but actually it can also mean things like disease … or malnutrition. So, anything that actually causes damage or harm to the body. Structural violence is key to understanding cultural violence and vice versa, so structural violence are things like institutionalized racism, ableism, sexism… all of these deep-rooted historical and current discriminatory practices that are embedded within our societies. Cultural violence serves to justify structural violence. So cultural violence can be things like science, religion, different kinds of philosophical ideas or rhetoric, political rhetoric. … It’s something like justifying the enslavement of African descendant populations by talking about the fact that we are actually different races of people and we have different origins. … It is used and provided to the populus as a justification for the enactment of structural violences and direct violences like enslavement and persecution for a particular people. Any science, any discipline, can be a vehicle for cultural violence. One of the ways in which we have to think about this is the idea of a hegemonic narrative. This idea of a single story for people that is perpetuated by people in power so something that comes up in my own research, in terms of the enslavement experience, is related to plantation slavery. … There are people that are enslaved in urban cities, and there are stories of free blacks that need to be told. Sometimes, even if people are well–intentioned and they’re trying to bring light to violences for a particular group of people, for example enslaved people, it can be dangerous to victimize a group of people and not also talk about resilience and their cultural resilience and the ways in which they were dealing with stressors and the ways in which they adapted to their environments and had agency. … We need to very carefully, contextually bring to light all of the different stories of people from the past. You have to tell all the sides of the story.

DD: Did you know you wanted to write about cultural violence?

JM: After I had read through all the articles, I was seeing this as a thread that people were trying to tackle. “How do we move away from cultural violence in our writing?” Basically, we are telling one narrative of the past, but the people from the past are no longer with us. So, they cannot tell us if we’re doing it right or wrong, but they do have descending communities that we can include in the conversation. Then we can collaborate to tell a more inclusive story of the past. So, I kind of knew as soon as I had read through all the articles that it made sense to talk about cultural violence and structural violence.

DD: Do you teach any courses at Ithaca College that talk about cultural violence?

JM: Yes, I do. I teach a class called Biology of Poverty, which I need to change the name of because it really should be Biology of Inequity. It’s a 300-level course, so it’s very much a seminar discussion–based course where we talk about all kinds of violences in different cultures. I’m coming at it from two different ways. One is to talk about this triangle of violence, and then I also use a lot of Kimberlé Crenshaw’s intersectionality, too. So, the intersections of how, say a Native American woman who is disabled, how those three identities come together and how that individual is treated within a particular societal context because of those intersecting identities. … I also talk a lot about structural violence, and I talk about post-mortem structural violence, so how we treat bodies after death. I also teach Bodies of Inequality, which is an Ithaca seminar that I teach, and I also talk about it a lot in my bioarchaeology class. Because this is central to my research, it becomes central to my teaching. Even if it’s not the main focus of a class, I wind up talking about it.