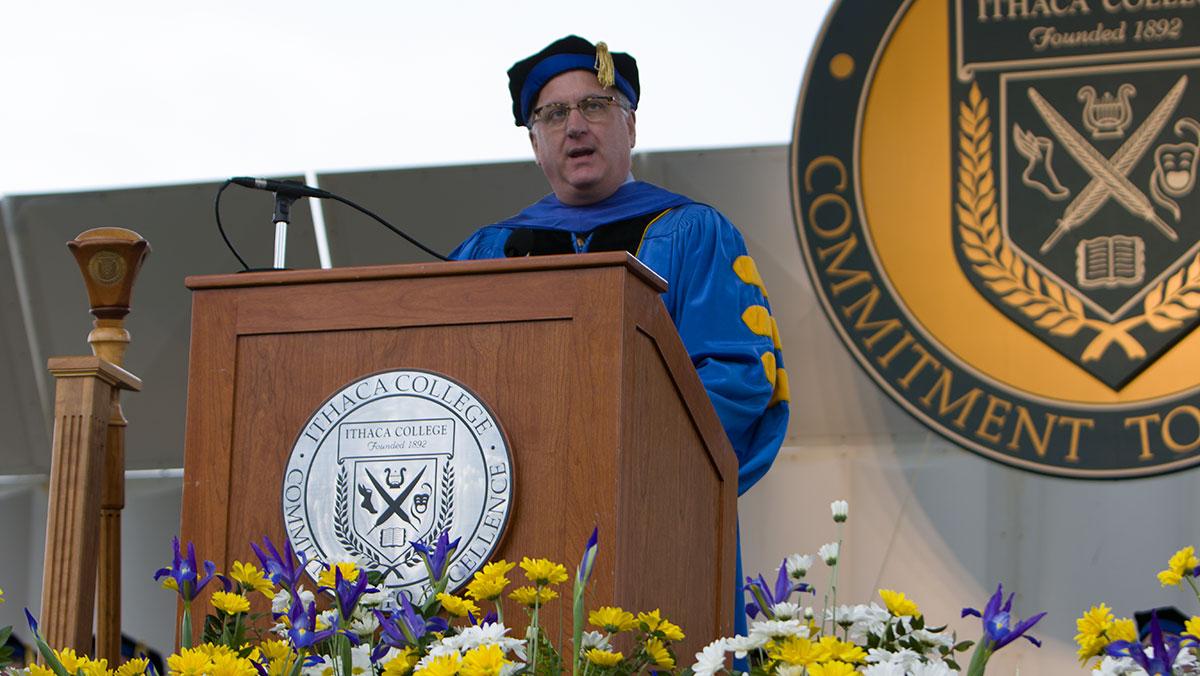 Amanda Den Hartog/The Ithacan
Tom Grape, Ithaca College Board of Trustees chairman, addressed the incoming Class of 2020 at the 2016 Convocation. News Editor Aidan Quigley spoke with Grape about these issues and, primarily, the college’s approach to the search for a new president.
By Aidan Quigley — News Editor
Published: November 9, 2016

Following the fall meeting of the Ithaca College Board of Trustees’ Oct. 19 to 21, Tom Grape, chair of the board, released a message to the campus community Oct. 30 addressing the presidential search, diversity on campus, shared governance and the tuition increase.

News Editor Aidan Quigley spoke with Grape about these issues and, primarily, the college’s approach to the search for a new president to replace President Tom Rochon, who is leaving the college in July 2017.

Aidan Quigley: I want to start out with the presidential search. … Would you say the search is still on track? Are there any difficulties that have arisen throughout the process?

TG: No, I think the process has gone very smoothly. But it’s a very time-consuming process. We’ve had lots of meetings with lots of different people. We’ve talked to a number of candidates. I will say that the opportunity to become the president of Ithaca College is a very compelling and exciting opportunity for folks in higher ed, so we’ve had a lot of attractive candidates apply. The process has gone smoothly. On the other hand, it’s a very competitive environment. We’re not the only college looking for a next president. And also, it’s a competitive market, and the process for searching for a president requires talking to a lot of people, and these people are already busy people, so it’s time-consuming, but I think it’s gone smoothly and gone well. There aren’t any particular problems that have arisen, but we’re not quite at the goal line yet.

TG: We’re down to a few candidates, and we’re excited about the folks we’re talking to. As soon as we are able to finish those conversations, we’ll have an announcement to make.

AQ: Do you still plan on having candidates visit campus and have the same thing that happened last time you did the search happen?

TG: As Jim [Nolan] said in his recent communication, we really haven’t finalized what those last steps are going to look like. We’re still sorting that out, and as soon as that’s sorted out, we will communicate what those steps will look like when it’s clear.

AQ: Recently, President Rochon announced IC 20/20, the long-term vision of the college, would be wrapping in 2017, and he would let the next president do their own strategic visioning. So what’s your opinion on the successes and failures of IC 20/20? What has been done well, and what needs to be done moving forward?

TG: IC 20/20 had some substantive successes and some things that had originally been hoped for that we didn’t quite get to. But I think the successes are very meaningful ones. I think the faculty did tremendous work and deserve great credit for the Integrative Core Curriculum. It’s not perfect. There are some adjustments that folks would like to be made. For our presidential candidates we’ve been talking to, everybody, without exception, has talked about how unique and innovative they believe it to be, comparing it to other models across the country. … I think some of the centers that have been created — the academic advising center, the center for faculty excellence and so on — have had some good successes, so I think there are… some very substantive and long-lasting things that have been accomplished. We didn’t get to things like the China Center, and those can be things … we’ll have to determine how those fit into the next round of strategic initiatives, to have with campus as we continue the next round of priorities. But I think IC 20/20 has had some substantive accomplishments, and the campus should feel good about those and celebrate those things that have been collective successes.

AQ: Over the summer, there has been a high level of administrative turnover, with different administrators leaving for different opportunities. Is the board of trustees concerned with how this will affect the college?

TG: They happened for different reasons. Turnover happens, particularly in times of presidential transitions. … We had several folks leave, frankly, because they were offered wonderful opportunities, which frankly didn’t have anything to do with the presidential change and situations we could do nothing but offer our congratulations to folks that we cared about and offered our applause and appreciation. In each case, we have capable either successors or interims that are minding the store. We may not have scripted it exactly this way, but we’re not concerned about the long-term health of the institution. We’re in good hands, and the next president will have the opportunity to make some appointments and have their team put together very quickly, and I think that gives them an opportunity to have their own team come together in short order, and many presidential candidates will view that as a great opportunity.

AQ: Recently, The Ithacan did a pretty large story about continuing staff’s concerns about morale, strategic workforce analysis and shared governance. And I noticed on the Intercom post that you posted, a staff member commented on how many staff feel like they are an afterthought, instead of being included in the conversation. What, if anything, is being done to address these concerns?

TG: I’m sorry to hear if that’s how staff members feel … the board feels that staff views and staff members are critically important parts of the IC community. We reach out to staff members when we are on campus, and we have a staff trustee. … We have great respect and value for the staff, and we’re always interested in hearing their views. … We’re in a period of transition, and I think once we’re able to name the new president and all of us are able to be moving forward again as a collective college community… it will be positive for everybody. We’re all excited for that and think that will help everyone feel like we are moving forward in the same direction again, and I think that will be great.