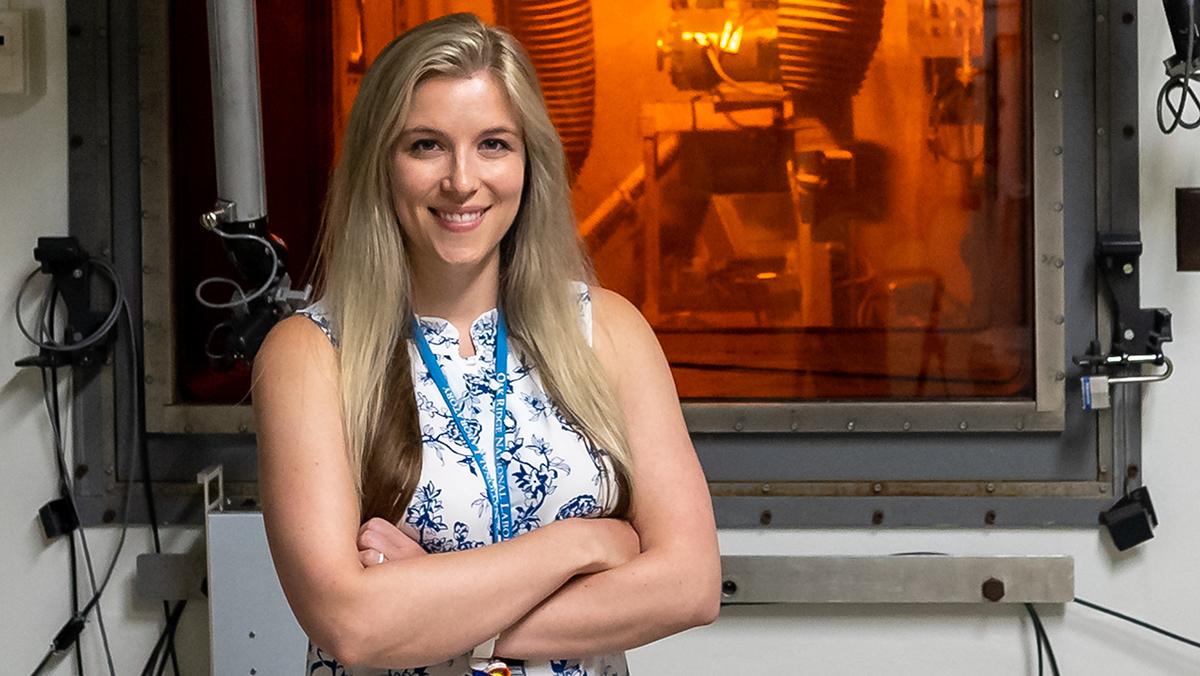 Courtesy of ORNL, U.S. DOE; Photographed by Carlos Jones
Samantha Schrell ’12 was awarded the Outstanding Young Alumni Award on Aug. 30. She majored in chemistry and received a Bachelors of Science from the college in 2012. Since graduating from the college, Schrell has done extensive work in areas like coordination chemistry and solid-state synthesis.
By Jadyn Davis — Staff Writer
Published: November 8, 2022

Every year, the Ithaca College Alumni Association awards seven alumni who have demonstrated excellence in their professional careers. Samantha Schrell ’12 was awarded the Outstanding Young Alumni Award on Aug. 30. She majored in chemistry and received a Bachelors of Science from the college in 2012. Since graduating from the college, Schrell has done extensive work in areas like coordination chemistry and solid-state synthesis.

Schrell is currently the director of the seaborg initiative at Oak Ridge National Laboratory in Oak Ridge, Tennessee, where she is finding ways to improve californium production. Californium is a chemical element that helps portable metal detectors identify gold and silver ores and is used to detect water layers in oil wells by generating high neurons.  made up of radioactive properties like Portable Isotopic Neutron Spectroscopy (PINS), Prompt Gamma Neutron Activation Analysis (PGNAA) and reactor start-up rods.

Staff Writer Jadyn Davis spoke with Schrell about her thoughts on the award and her impact on the chemistry world.

Jadyn Davis: How did it feel to win the Outstanding Young Alumni Award?

Samantha Schrell: It was a really great honor. I never really expected to win it at Ithaca College, and I know that chemistry isn’t really what Ithaca College is known for, so I think it was a good accomplishment.

JD: Can you explain a little bit more about your title as the director and seaborg initiative?

SS: Glenn T. Seaborg is a big name in the field of isotope and actinide science because he discovered a lot of heavy elements like plutonium. There are five Seaborg Institutes that exist across the [National Laboratories] system. Largely what they try to do is push the frontiers of actinide science while educating the next generation of scientists and engineers. It’s largely a workforce development initiative where we try to bring people into our unique national labs where we do this really cool and interesting science and train them to become the next generation of us essentially. We really need to work pretty hard to make sure we have people to leave this work behind to people who know what they’re doing.

JD: What advice do you have for current Ithaca College students that are interested in a career in chemistry?

SS: One thing that I really liked about going to IC for chemistry was that the professors there were phenomenal. I had never had professors that were so good in my entire career. I think the small class sizes and really getting to interact with the professors is really a good opportunity that you don’t get at big institutions.

JD: Who were some of your mentors during your time at the college?

SS: Two that stand out are Janet Hunting [associate professor of the Department of Chemistry] and Mike Haaf [professor and chair in the Department of Chemistry]. [Haaf] was kind of like my research adviser and I did a lot of undergrad research under him. I think that one of my favorite parts of chemistry is being in the lab and having fun. I think he taught me a lot of my lab skills and a lot of good research practices that I carried on. [Hunting] was an inorganic chemistry teacher. … She is just a fantastic teacher and goes above and beyond. She had her door [open] 95% of the time, even on weekends and strange hours. She was always there to help me.

JD: What are you currently researching and why?

SS: I have a handful of projects that I work on. Two of the bigger programs that I work for are the californium–252 production. Californium is primarily used as a neutron admitter, where in the particle sense, it’s put in reactors to get that chain reaction started so that when they bring up new nuclear reactors, they use it to start it among a bunch of applications that are most popular. One of the other programs I work for is the plutonium–238 production. So that’s used as … a radioisotope thermoelectric generator (RTG). So it’s put in the Mars rover to power it while it’s on Mars. I have a ton of smaller projects just exploring the fundamental chemistry of actinides. … If you remember what a periodic table looks like, it’s that bottom row that kind of gets ignored for the most part and [is] not really taught in any general chemistry class, but their chemistry is relatively underexplored because they’re highly radioactive. … Their chemistry is complex and unknown and I think that’s what makes it exciting and interesting to study.

JD: Can you tell me a little bit more about your thesis for your Ph.D.? What was the inspiration behind it?

SS: I went to Florida State for inorganic chemistry because of [Hunting’s] influence. Largely, it was something that I kind of fell in love with. So how you kind of pick your research adviser when you’re looking at your Ph.D. is kind of whose research seems interesting to you and who has space, obviously. Thomas Albrecht-Schoenzart [radio chemist and professor in the Department of Chemistry at the Colorado School of Mines] sparked my interest in this field of inorganic actinide chemistry. So my Ph.D. focused largely on californium coordination chemistry among the other actinides. It was an element, at the time, that there wasn’t much known about it. So we just started doing some basic chemistry and trying to figure out what it does with other elements, what it does in certain solvents or interacting with different molecules, and that’s kind of the basis of what I did.

JD: What has been the most interesting about researching californium so far?

SS: It’s an element that most people in the world will never see. It’s a pretty cool element — it glows green, kind of how you might expect something radioactive to look. The actinides are very underexplored and their chemistry isn’t well understood. So I think that it’s just exciting to me every day to get to work with things that we don’t really know that much about.