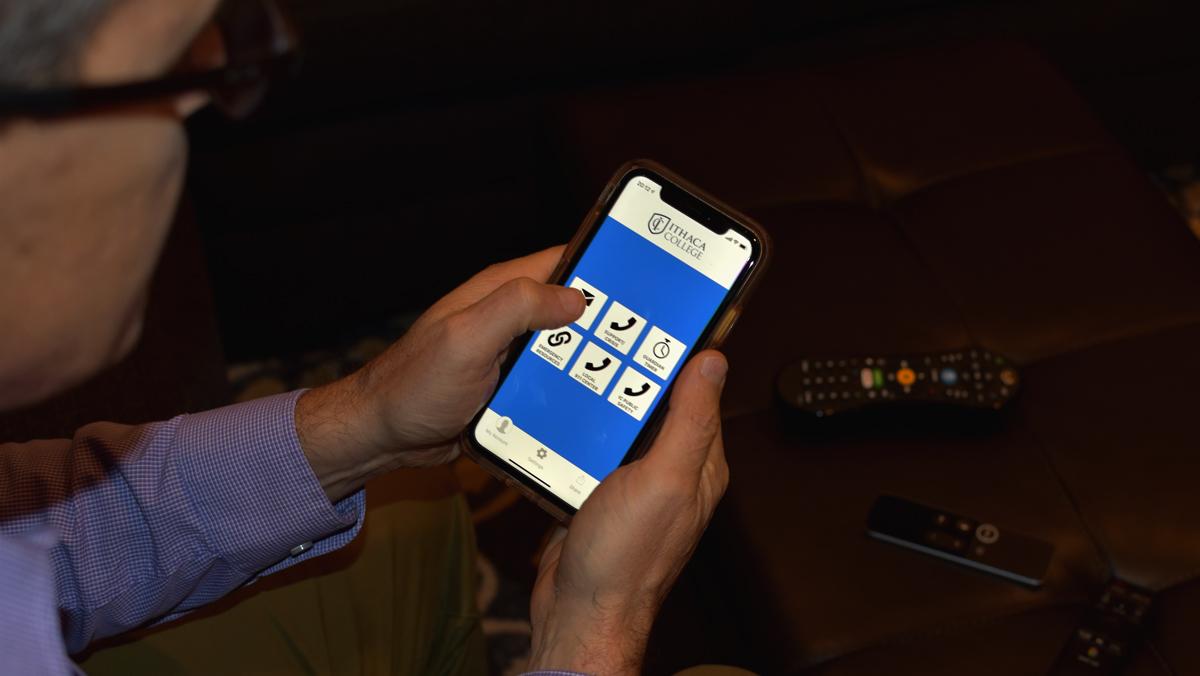 Bec Legato/The Ithacan
The Office of Public Safety and Emergency Management (OPS) is working to increase use of Rave Guardian, the college’s public safety app, among the campus community and at other Ithaca College campuses. While Rave Guardian was introduced to the college’s campus in April 2021, Samm Swarts, associate director of Emergency Preparedness and Response, said the app was launched at the Ithaca College London Center (ICLC) on Aug. 23 and will be available at the Ithaca College Los Angeles campus starting in Spring 2023.
By Clare Shanahan — Assistant News Editor
Published: August 31, 2022

As engagement with the Rave Guardian app at Ithaca College rises, the program is being expanded and implemented at new locations.

The Office of Public Safety and Emergency Management (OPS) is working to increase use of Rave Guardian, the college’s public safety app, among the campus community and at other Ithaca College campuses. While Rave Guardian was introduced to the college’s campus in April 2021, Samm Swarts, associate director of Emergency Preparedness and Response, said the app was launched at the Ithaca College London Center (ICLC) on Aug. 23 and will be available at the Ithaca College Los Angeles campus starting in Spring 2023.

Currently, the app’s main features include allowing students to call OPS, share their location for a set-time period with friends, and access links to other critical and emergency resources, including the Center for Counseling and Psychological Services, the Title IX Office and Information Technology. The app can also be used by the college to deliver emergency alerts to students via push notification.

“People sometimes delete the app and that can impact our goal, but it’s our goal and we are going to continue to strive for it,” Kerry said via email.

Kerry said in an interview with The Ithacan that Rave Guardian is extremely important because, in addition to working on cellular data, it allows students to make emergency calls and receive emergency alerts with only an internet connection, so it is effective when cellular signals are jammed or service is lost.

Swarts said that since the adoption of the app in 2021, OPS has slowly increased its use at the college, but was inhibited by COVID-19; Swarts said the team was unable to introduce the app to first-year students at orientation events, decreasing its use on campus.

Senior Maya Scriven said she did not know about the Rave Guardian app before she was introduced to it at resident assistant (RA) training in Fall 2022.

“I just feel like a lot of the resources that Ithaca College does have available, which is great, is just not really told to people,” Scriven said. “I told my residents about it. I think the school feels it’s the responsibility of other leaders, not the campus itself, to actually tell the students and inform them about these resources because I never heard about it until [RA] training.”

At the 2022 New-Student Orientation, students participated in resource rotation sessions in which they met with various offices at the college. Elyse Nepa, assistant director of Clery Act and Prevention Education, said at one resource rotation session the Rave Guardian team, including Swarts and Nepa, introduced students to the app and encouraged them to download it. Swarts said that in the future a required portion of the orientation process will be to download the Rave Guardian app.

Nepa said that in the 2021-22 academic year, OPS offered an introduction to Rave Guardian app use as part of the student leadership institute series hosted by the Office of Student Engagement. Nepa said OPS also hosts a training series called Emergency Preparedness and Response for students that features Rave Guardian as an important resource. According to the college’s website, this training can be requested by any office or group at the college and will be tailored for the specific organization.

“Any opportunity that we have to encourage our campus community to download and use the app and understand how easy it is to use and how accessible resources can be and help can be is really a high priority of ours,” Nepa said.

Sophomore Ranjini Iyengar said that although she was encouraged at RA training to inform her students about the Rave Guardian app, she already had downloaded the app on her own because her RA recommended she download it in 2021. Iyengar said she feels that OPS does a good job of informing the campus community of its resources.

Swarts said the Rave Guardian team at the college is constantly monitoring updates to the app from developers that they may be able to implement. Swarts said a new feature in the app allows students to add additional phone numbers for themselves; this means that students can now add an international phone number for use when they are abroad and makes the app possible to be implemented at the ICLC. According to the Ithaca College website, phone numbers allow emergency alerts from the college to be sent through multiple forms of communication to ensure students receive them. Swarts said students who attend ICLC will also be encouraged to download the app during orientation.

“I can’t project what in the future they might roll out, but if we find that it’s a useful feature, we would certainly want to bring that to the campus community,” Swarts said.

Rachel Gould, senior director for study abroad in the Department of International Programs and Extended Studies, said that although ICLC has emergency contact systems in place, the app will make this process much easier.

“I think it will be an advantage to us in London,” Gould said. “We have always had means of contacting our students in an emergency, via email and text and that sort of thing, but this sort of centralizes it and it does bring the IC emergency response folks sort of into the loop.”

Gould said Meghan Callahan, director of the ICLC, is currently researching London-based resources to update those that students can access through the app when they are abroad so they are more applicable.

Not every feature offered by Rave Guardian is available to the college community; for example, the app offers a two-way direct texting system where students can communicate with a dispatcher. Kerry said OPS does not have enough staff to monitor a system like this in addition to the college’s other options for reaching public safety officers.

“It’s an option, but we don’t feel that we could safely do that,” Kerry said. “So if somebody was to text something in, with everything that that one person is already doing in our dispatch center, they may not be able to engage in that way given everything else that’s going on in that area.”