When many current college students were still in middle school, the United States suffered one of the deadliest attacks in its history. Across the U.S., children were taken out of school. They learned a new word that would pervade a decade: terrorism. 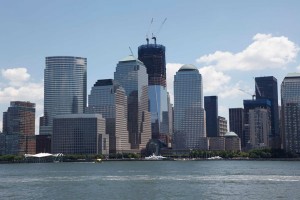 One decade after the 9/11 attacks, New York City is still rebuilding, and a new skyline is taking shape. One World Trade Center rises from Ground Zero and will stand at 1,776 feet. Michelle Boulé/The Ithacan

They would later learn of the men and women who lost their lives after going to work or boarding a plane, and of those who gave their lives to save anyone they could as towers burned and smoke blackened skylines and TV screens.

This week, the college and community will hold a series of services and ceremonies to mark the passing of one decade since that attack. The events will commemorate lives lost and invite reflection on the crisis.

For many college students, the 10th anniversary of the Sept. 11 attacks still recalls vivid memories.

Junior Juliet Barriola lived in northern Manhattan in a community called Inwood. She said early in the morning her teacher gathered the students together and explained to them what a terrorist attack was. 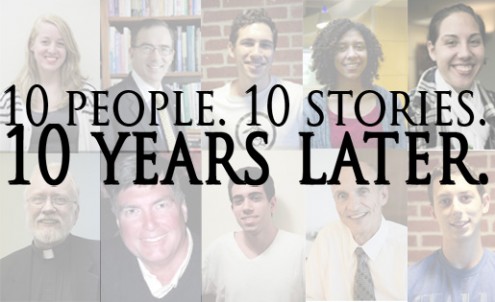 Members of the Ithaca College community reflect on their 9/11 experiences in this interactive presentation.

“We had never heard of that, and she told us about the towers,” Barriola said. “I didn’t really understand what was going on, but my aunt picked me up early and we sat in front of the TV and watched the towers all day.”

Barriola said her mother worked in an office five blocks from the World Trade Center, facing the towers. Her aunt didn’t tell her how close her mom was at the time.

“She saw where the planes hit and she was nervous,” Barriola said. “She had to evacuate the building and walk over 100 blocks. She came home very tired with dust on her clothes.”

Junior Amber Zadrozny went to school in Milford, Conn., and remembers only confusion.

“The principal made an announcement over the intercom saying that it was a ‘Code White,’” she said. “All the teachers got really worried looks on their faces and left the room for a minute and came back. They didn’t tell us what had happened, but you could tell they were stressed out.”

Zadrozny said many students left early and no one was allowed outside for recess.

It wasn’t until Zadrozny’s mother picked her up from school, brought her home and turned on the television that she had any idea of what was going on. For some, the attacks crushed all sense of security.

“For weeks afterwards if I heard a plane, I would run outside to see what was going on because I was afraid it was coming down on Philadelphia,” junior Bella Ciabattoni said. She was in Pennsauken, N.J., during the attack.

Two years later, Ciabattoni took a flight from California to New York City. She said she wasn’t familiar with the flight paths and didn’t know that the plane had to go over the ocean and turn around to face the landing strip.

“I freaked out because I thought we had been hijacked and that we were going to keep going over the Atlantic,” she said. “I started crying, I was so scared. My mom had to convince me that they just had to turn around to get onto the runway.”

Looking back a decade later, students have mixed sentiments toward Sept. 11.

“I feel like in a way it’s fading back into history like Vietnam,” Ciabattoni said. “But I also see the other side of it: people keeping alive the symbolism and everything that it means for us.”

Others recall the collective spirit from the days immediately following the attack.

“It was sad, but it also brought people together because they thought, ‘We lived through this, we’re strong,’” Barriola said.

Though 10 years ago is a time associated with chaos, this weekend, the college, Cornell University and the Ithaca community will hold events in remembrance.

At 8:30 a.m. Sunday, President Tom Rochon will join the presidents of Cornell and Tompkins-Cortland Community College for a memorial service at the Ithaca Fire Department to commemorate the firefighters who gave their lives to save thousands during 9/11.

Thomas Dorman, acting fire chief of the IFD, said the event will also serve to remember others who came to aid in the wake of the attack, including police officers, emergency medical workers and volunteers.

“I’m hoping that people remember,” he said. “That’s what it’s about — remembering what happened 10 years ago. Almost 10 percent of the people who lost their lives that day were New York City firefighters, just ordinary people who were out doing their job.”

Dorman said there has been great community response at every level to mark the decade after Sept. 11.

In New York City, the National 9/11 Memorial in Lower Manhattan will be unveiled Sept. 12 to those who secured an online pass. The memorial, created by architect Michael Arad and landscape designer Peter Walker, is a pair of acre-wide waterfalls that sit where the towers once stood, and the names of those who died in the World Trade Center attacks of 1993 and 2001 are inscribed in bronze.

In downtown Ithaca, the Rothschild Building is housing a twisted metal remnant of a staircase from the World Trade Center. Ithaca is one of 30 cities in New York state to receive an artifact from the towers this weekend.
At 3 p.m. Sunday, members of the Protestant, Jewish, Catholic, Muslim and Buddhist communities on campus will look to foster a tone of peace.

Last year a commemorative peace pole that was dedicated at the college on the first anniversary of Sept. 11 went missing. The new pole was installed this year with added concrete to make sure it stays in one place. The pole is inscribed with the words “May Peace Prevail on Earth” in multiple languages.

Father Carsten Martensen, the Catholic chaplain at the college, said the religious communities will hold a ceremony at Muller Chapel pond to officially dedicate the new wooden peace pole installed last week.
“We’ll have a dedication and read the names of the members of the community who died 10 years ago,” Martensen said.

Martensen, who has been organizing the events for more than a year, reached out to students to share their memories of Sept. 11 for public record and the college archives.

“We don’t want those memories to be lost,” he said. “These are important memories. Maybe from our remembering personally and also corporately, we can really pursue peace instead of looking for revenge.”

Martensen said planning the ceremony reaffirmed his mission to spread a message of peace as far as he can.

“I’ve been amazed just working with this number of people I’ve met and how wonderful it’s been,” Martensen said. “Just that human contact that I’ve experienced has changed my heart more and deepened an awareness of peace and love in my heart.”