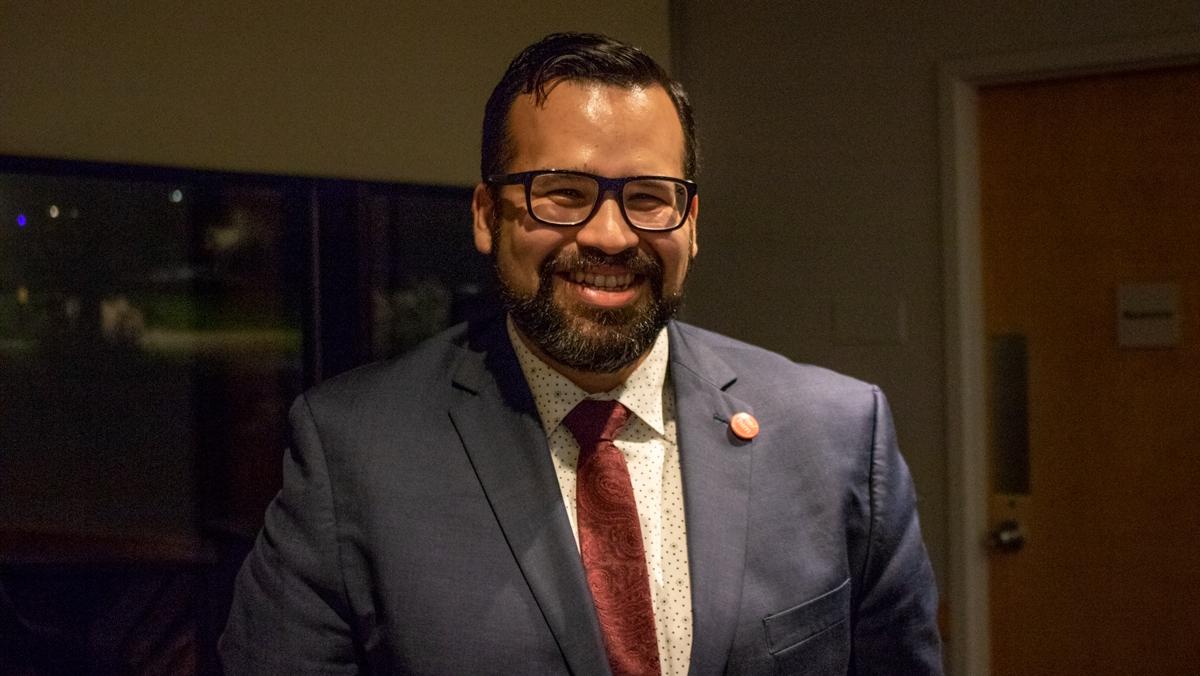 Caroline Brophy/The Ithacan
Hierald Osorto, director of religious and spiritual life, shared his experience as a gay latino growing up in a religious household and a predominantly white area of Newark, New Jersey.
By Elizabeth Henning — Staff Writer
Published: October 16, 2018

Being different is something Hierald Osorto knows well. As a gay, Latino Christian, he said, he has spent his entire life questioning how the intricacies of his identity have impacted his self-perception.

Osorto, director of religious and spiritual life, spoke about his experiences as a member of the LGBTQ community in an annual talk held in commemoration of National Coming Out Day on Oct. 10. Every year, the Center for LGBTQ Education, Outreach and Services at Ithaca College hosts a local speaker to share their experiences opening up about their sexuality. During the event, titled “Creating from Chaos,” Luca Maurer, director of the Center for LGBTQ Education, Outreach and Services, asked Osorto about his identity, not only as a gay man but also as a Latino man of faith. Approximately 10 students attended the event.

Osorto started working at the college this semester. The position was created partly to mend issues among the faith communities on campus and was proposed by Roger Richardson, associate vice president for the Division of Student Affairs and Campus Life, and students from the faith communities. Osorto said that although he initially resisted coming to the college, he feels called by God to serve in his current position.

“I feel like the places that I find myself in are the places that I probably have resisted the most,” Osorto said. “There’s a sense of ‘I’m called to this moment, to this time, to this place, and I am going to do the best that I can with the community around me.’”

He said the work that he and others at the college are doing to help create a dialogue takes courage. In order to go against the status quo and the systems that society perceives as normal also takes strength and courage, he said.

The need for strength is what gave Osorto the inspiration for the title of the dialogue.

“I feel like the coming-out experience is continually a chaotic experience,” Osorto said. “‘How do I navigate choosing to come out or choosing not to come out, both being okay realities?’”

Osorto shared the story of coming out to his mother, which he described first and foremost as chaotic. He said that when he came out, the only thing his mother could say was that she loved him. Although neither fully understood their emotions at the time, Osorto said, he knew that she would support him.

The most difficult part about coming out for Osorto was reconciling his sexuality and his spirituality. For students struggling with the same problem, Osorto recommended searching deeper within their faith and their traditions.

“Finding those texts that I draw from, the Bible, what are the ways that the stories there celebrate reconciliation or engagement with my spirituality or who I am,” Osorto said.

Before Osorto came out as gay, he said he came out as Latino. As a child growing up in a predominantly white area of Newark, New Jersey, and as the son of Salvadoran immigrants, he said, he wanted to be like the other children at school.

“I used to go by Gerald … because my kindergarten teacher told me it was easier to say,” Osorto said. “I was like, ‘Yes, I am that white kid from suburbia.’”

He remembers feeling ashamed of his culture until he was in college, where he “came out as a Latino” and identified by “Hierald” instead of “Gerald,” he said.

Osorto said he did not come as gay until later in his 20s after attending Messiah College, a conservative Christian college in central Pennsylvania. While at college, he said, he could not be fully out, but his college gave him the tools he needed to question his religion and begin to reconcile his sexuality and his spirituality.

“It provided me the tools, ironically enough, to step away from Christianity and question in a way that I had never quite done growing up,” Osorto said. “There was this safety net in my Christian community that I was afraid of — if I questioned anything, I would lose everything.”

Since coming out in his late 20s, Osorto has become more comfortable in who he is and how his identities connect, he said.

“I believed in these narratives that I always thought were exclusive,” Osorto said. “I’ve realized that there’s a narrative in there that says I am beloved, fully. That is who I am. I am embraced. I don’t have to argue about that belongingness that I know I have in this world.”

Osorto said that in order to move intersectional awareness forward, people need to be more aware of the way that they impact others. He questioned who the partners were in conversations about marginalized groups. If they were not members of the groups themselves, then the conversation only furthers stigma and exclusivity. He also said privilege, especially racial privilege, prevents society from being completely intersectional. Ultimately, he recommended that instead of acting as allies to LGBTQ people, students should be proactive in adding advocacy.

He also suggested going places where reconciliation could be seen. For him, it was a church in Washington, D.C., where he saw LGBTQ couples worshipping together with the rest of the church congregation. He also said it was important for him to draw a distinction between spirituality and institution. While in college, Osorto traveled to Nepal because his professor recommended the trip to him. He said his experiences with the Nepalese people who were of a different faith than himself taught him about the difference between religious constructs and personal spirituality.

“We may believe different things,” Osorto said. “They didn’t have the language of intersectionality or being woke or all the lingo of privilege and access to the world, but they had a simplicity in how they extended hospitality to you even though we came from very different faith traditions.”

Osorto will be hosting meals for LGBTQ students to talk with him about their experiences, specifically surrounding faith on campus. The meals will be held noon–1 p.m. Oct. 22 and 23 and 5–6 p.m. Oct. 30. The location will be announced at a later date.