Renovations to Towers residence halls completed over the summer 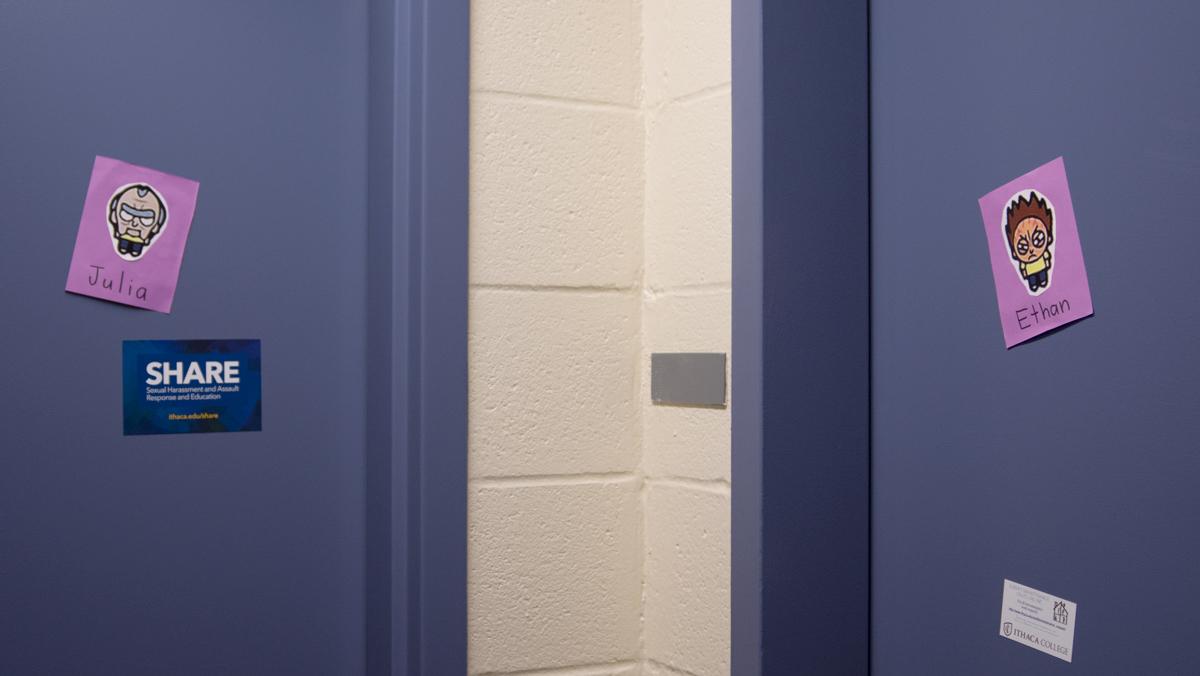 Over the summer, the Office of Residential Life completed the installation of individual gender-neutral bathrooms in the Towers Residence Halls that began the summer of 2016.

Last summer, floors 10 through 13 in West Tower underwent construction to replace communal bathrooms with individual gender-neutral bathrooms. The college completed renovations to the remainder of West Tower and floors eight through 13 in East Tower this summer. Jenny Pickett, assistant director of residential life, said the department decided to change Towers first because it was easier to meet Americans with Disabilities Act standards, as there are elevators in both buildings.

She said the communal bathrooms were not accessible to students with mobility issues, thus failing to meet ADA standards. The new bathroom layout includes one bathroom on each floor that is whee-chair accessible, Pickett said.

Bonnie Prunty, director of the Offices of Residential Life and Judicial Affairs and assistant dean to First–Year Students, said gender-neutral bathrooms are beneficial for students who do not identify with a gender binary because it does not force them to choose a gender to identify with.

In addition to the new bathrooms, both Towers now have a coed by door layout, one bottle-filling station per floor, one communal sink per floor and a large community lounge on the eighth floor, which is the first thing students see when the elevator door opens, Prunty said. In addition to these changes, all windows in West Tower were replaced.

The renovations to West Tower last summer received positive feedback from students and staff through campus-wide surveys, floor feedback and interaction with staff on tours, Pickett said. Since the feedback was so positive, a Project Approval Request (PAR) was filed in fall of 2016 to renovate all of West Tower’s bathrooms.

The department eventually received more money than it had originally requested to complete the renovations to West Tower, she said. Tim Carey, associate vice president of facilities, said the additional funding was due to the $10 million that the Ithaca College Board of Trustees authorized to be used for deferred maintenance items.

The department decided to use the additional money to renovate floors eight through 13 of East Tower, as the floor layout of both Towers is almost identical, Pickett said. The remodeling of an entire floor in Towers costs an average of $330,000 per floor, Carey said. The Towers bathrooms’ remodeling will be spread out over three fiscal years, the last being fiscal year 2019, Carey said. Pickett said she plans to submit a PAR request for fiscal year 2018–19 to finish the remainder of the bathrooms in East Tower this upcoming summer.

Some but not all of the Terraces had gender-neutral bathrooms prior to these renovations.

“We would like to expand this to the Quads and some of the Terraces,” she said.

Prunty said she was happy with the changes Towers has been going through and the positive feedback they have been receiving, especially regarding the bathrooms.

Kathleen McAleese, who was the resident assistant for the 13th floor of East Tower last year when it was only occupied by women, said she views the switch as an opportunity to make all students feel as though they belong where they live.

She said she is glad the college is taking steps to include itself in conversations about gender and inclusivity and that she is able to represent a floor where students can have these conversations.

“Since the topic of gender inclusivity has become a forefront topic with trans folks in the media … I’m really excited to potentially have a floor that is also within the topic of those conversations,” she said.

According to the Quality for Life Survey given by the Office of Residential Life, moving to co ed by door on all floors is the most popular housing option among incoming freshmen, Prunty said. The survey asks students questions about different housing configurations to understand the environment most people feel comfortable in, she said.

Freshman Elizabeth Carroll said she feels comfortable living in a coed dorm and that if she has concerns, she would be able to handle them in a reasonable manner.

“I think that the gender-neutral bathrooms are a good way to make a lot of people comfortable,” she said.

Freshman Hannah Welshoff said living on a co ed floor is not a concern of hers but said that it will take time for her to adjust to the gender-neutral bathrooms.

“I would feel more comfortable if it was a boys’ bathroom, girls’ bathroom and gender-neutral bathroom,” she said. “But looking at it from a group perspective, it might be better for all genders.”

There are many benefits of having a co ed residence hall, as it allows the Office of Residential Life to be more responsive to the year-to-year freshmen demographic, Prunty said. It also meets students’ needs in terms of the type of community they would like to live in, she said.