The number of reported rape cases and drug abuse violations increased from 2013 to 2014, while reported liquor law violations decreased,
according to the 2015 Annual Security and Fire Safety Report released by the Office of Public Safety and Emergency Management on
Oct. 1.

According to the report, the number of rape cases reported on campus has increased from zero cases in 2013 to four cases in 2014.

Public Safety Investigator Tom Dunn said the increase in the number of rape cases reported may have to do with more people taking the initiative to report it. 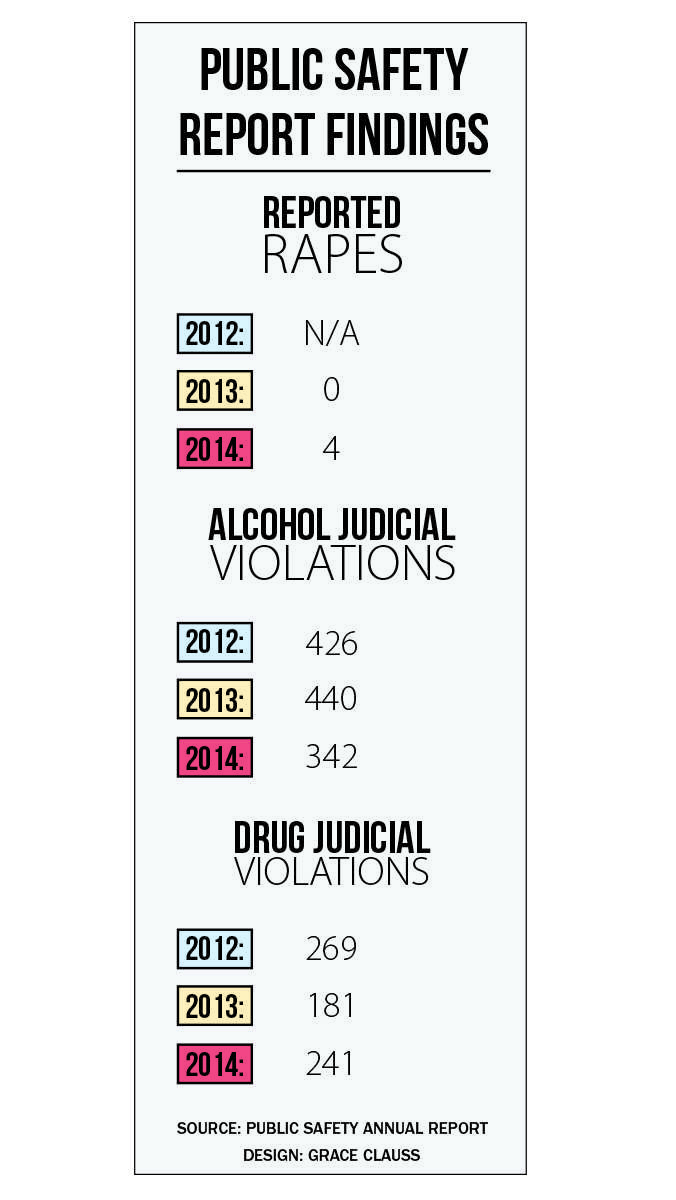 Dunn said the Title IX coordinator provides students with the opportunity to report rape cases to an external source so they feel more comfortable than reporting it to the police.

“The 2014 statistics include reports that went to Title IX, not necessarily investigated by the police, but just documented that it occurred on
campus,” Dunn said.

Tiffani Ziemann, Title IX coordinator, said her role is to reach out to students and help them understand the options and resources available for reporting cases of sexual misconduct, like rape.

“I think in the past couple of years, Ithaca College and all colleges and universities have been doing a lot better job of explaining to students their reporting options,” Ziemann said.

“I can’t speak to why 2013 had none, but the fact that we had four reported in 2014 means that more cases came to the college’s attention,” she said. “Either students were connected with the resources or sought out a judicial response.”

Dunn said in 2012, sex offenses were categorized as either forcible or non-forcible, and in 2013, they expanded to four more descriptive categories: rape, fondling, incest and statutory rape.

“I’m very proud with our 2014 statistics, and I think with the changes in sexual assault classifications … it gives people a better feel for what those numbers mean,” Dunn said.

Ziemann said she thinks the number of rape cases on campus is underreported across all
college campuses.

“I think it’s just an improvement of people’s understanding of what the college needs to do and the ability to report,” she said.

In 2013, the number of on-campus drug abuse violations that resulted in disciplinary action was 181 cases, which increased to 241 cases in 2014.

Last year’s reported number of disciplinary actions against liquor law violations was the lowest recorded in the past decade.

He said the numbers significantly increased and then started to decrease when students realized the RA could refer them for alcohol violations.