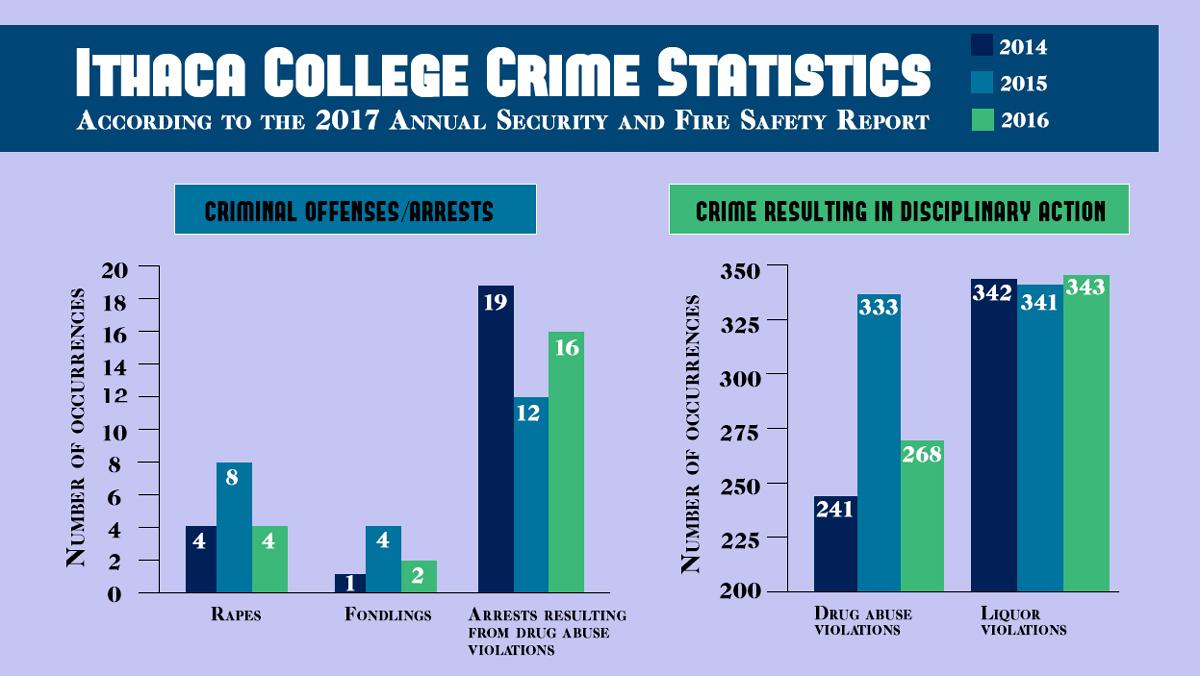 The number of reported drug abuse violations and rapes reported to the Ithaca College Office of Public Safety and Emergency Management both decreased in 2016, according to the 2017 Annual Security Fire and Safety Report released on Sept. 28.

The report compiles data of crime and fire incidents that took place both on and off campus during the calendar year of 2016. The report includes previous data from 2015 and 2014. The college is responsible to release the annual report by Oct. 1 each year in compliance with a federal mandate.

Tiffani Ziemann, former Title IX coordinator at the college, said that it is difficult to determine the cause for the decrease in reporting. Ziemann left the role Oct. 6 to take the position of director of leadership education for the fraternity Delta Tau Delta, which has chapters at colleges across the country.

“It really is hard to say because we don’t know if numbers are going down because it is happening less often or if people are choosing to report less,” Ziemann said.

Ziemann said that although she would ideally love to see a campus with no reports because sexual assault is happening less often, she said that she is happy to see that people are reporting and using resources that Public Safety and her office offer.

“I don’t want them happening, but at least I know people know they have options to go make reports,” she said.

Michael Leary, assistant director for the Office of Judicial Affairs, said last year that he expected the number of alcohol-related crimes to increase in 2016 because of incoming students’ lack of awareness of the Office of Residential Life’s new policy regarding the prohibition of minors having alcohol containers and “drinking paraphernalia.”

Leary said that the college did a good job of relaying information regarding the Residential Life policy to students and that that contributed to the lack of increase.

Tom Dunn, lieutenant in the Office of Public Safety and Emergency Management, said the data has remained consistent compared with 2015. He said that Public Safety has been trying to increase student awareness of how important it is to report crimes.

“I think even if our numbers sometimes increase slightly, if the trend is a slight increase, I think it’s attributing to better education and people knowing ‘I’m going to call and do the right thing,’” Dunn said.