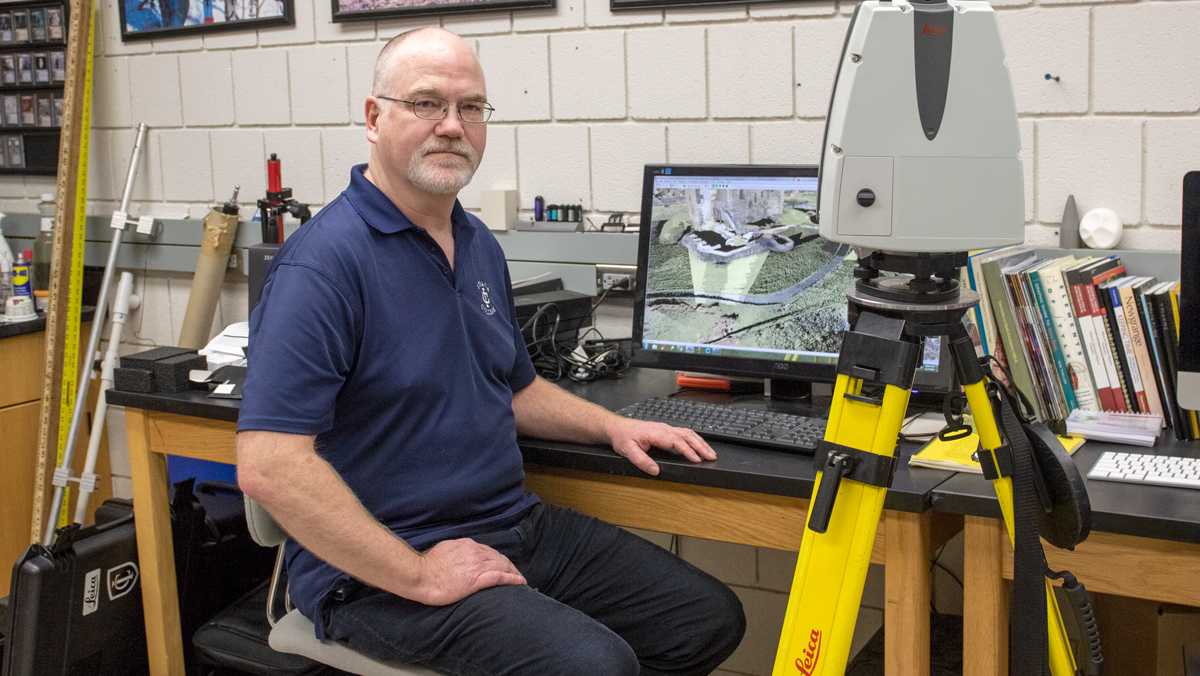 Julia Cherruault/The Ithacan
Michael ‘Bodhi’ Rogers, professor in the Department of Physics and Astronomy, is helping a group of students map out routes on campus using laser technology to create an app to help people who are not able-bodied.
By Mary Rand — Staff Writer
Published: November 7, 2018

South Hill — the steep incline that Ithaca College’s campus is situated atop — may seem like an impossible challenge to climb for individuals who are not able-bodied.

That’s why a group of students is leading a research project to map the slope of every path on the college’s campus in hopes of developing an app that would provide the best routes to get around for individuals unable to easily travel steep or otherwise precarious inclines. They are doing it with the help of a college physics professor and 3D laser–scanning technology, which will be used to survey the paths.

The researchers, graduate students Mara Erb and Hannah Shade, along with junior Emily Pressman, are operating with funding from a seed grant awarded in January to Deborah Merriman, assistant director of benefit programs in the Department of Total Rewards and Workforce Strategy, as part of President Shirley M. Collado’s Seed Grant Initiative.

The official title for the project, according to a college press release, is “Enhancing disabilities resources and awareness on campus.” The funding for the project is approximately $11,000, the majority of which is earmarked to pay the salaries of the student researchers. The rest is meant to cover possible costs in developing the app, Merriman said.

The Seed Grant Initiative is a fund for a number of faculty and staff projects. Students can participate in faculty or staff projects but may not apply for a grant individually.

Merriman proposed the research out of a desire to see greater collaboration between her role in the Office of Human Resources and students, faculty and staff across the college.

“It’s nice to step outside of the normal day-to-day,” Merriman said.

Merriman said their app could be valuable to not only students with disabilities but to visitors who may be more inclined to attend the college knowing how to get around. Merriman also said the possibility of unforeseen changes in the health of faculty at the college was a consideration.

“If you can have an app that makes it easier for a person, if you can have a collaboration and another tool out there for utilization, why not?” Merriman said.

The researchers said the purpose is not to criticize the construction of the college but to spread knowledge about the routes that already exist and may not be clear.

This fall, the researchers also sought out the help of Michael ‘Bodhi’ Rogers, professor in the Department of Physics and Astronomy, for assistance in surveying campus paths.

Rogers has experience in 3D laser scanning, a surveying process involving many lasers that are shot every 5 mm over a geographic space. Sensors in the equipment then take x, y and z coordinates of the distance from the point the laser hits to the sensor. When plotted, the points hit by the lasers form a three–dimensional map of an area, Rogers said.

While scans produce full three–dimensional images, for the purposes of this project, Rogers said the researchers will plot the x, y and z coordinates of points only along campus paths and use trigonometry to calculate the slopes. The scanning will be performed by two students from a specialized research course on laser scanning, Rogers said.

Rogers said that once collected, there are further challenges in interpreting the data. For example, focusing on one stretch of a path might make it appear flat, but comparing points from a longer stretch may instead be a much greater incline, so careful attention must be paid to which points are used, he said.

“It is an interesting campus, and it would be really nice for people to know [accessible routes],” Rogers said. “I’m excited by the challenge.”

While the planned date to move forward with the laser–scanning phase was Oct. 26, the researchers are extending the deadline for responses to a later date due to a lack of sufficient participation, Erb said.

Once that phase is completed, the researchers will spend the winter with the students from Rogers’ team surveying routes, a process that may take a few weeks to half a semester, Merriman said. Following that process, the researchers will pass off their data to David Cameron, senior web strategist in the Office of College Relations and Communications, for the app to be developed.

For the student researchers, firsthand experience on the challenges of accessibility sparked an interest in the topic.

In Erb’s Applied Interventions in Occupational Therapy class, she was tasked with spending a period of time over three days in a wheelchair. She would have to travel from the bus stop at the Roy H. Park School of Communications to the Center for Health Sciences, approximately 0.8 of a mile, according to Google Maps.

The experience immediately sparked Erb’s interest in the topic. As an able-bodied person, she struggled with adapting to the new method of movement, she said.

“That’s not to say I know what it’s like to be a wheelchair user,” Erb said. “I knew that I could have stood up at any point, and I did because I didn’t have the abilities or the know-how to get around.”

As graduate students, Erb and Shade may not be able to complete the research before leaving the college. They urged interested students to get involved after them.

“This campus wasn’t built to be accessible to all,” Shade said. “It’s in us all to try and make it as accessible as possible.”