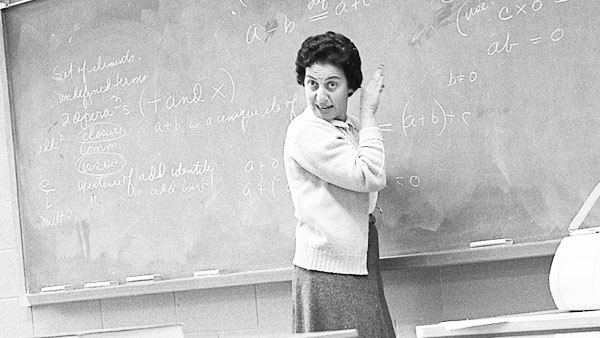 Courtesy of Rachel Hockett
Shirley Hockett, professor emerita at Ithaca College, passed away Sept. 29. She is shown here teaching calculus at Ithaca High School circa 1966. She also taught at the college at the time.
By Noah Orent, Noreyana Fernando — Staff Writer and News Editor
Published: October 9, 2013

The Ithaca College community is saddened by the loss of Shirley Hockett, retired professor emerita of mathematics and computer science and one of the college’s most well-known supporters. She passed away at the age of 93 on Sept. 29 at Bridges Cornell Heights, a senior assisted-living facility, where she had resided since 2008.

Hockett joined the college’s mathematics department in 1966. She was named a full professor in 1973 and retired in 1991. Thereafter, she was honored by the Board of Trustees with the title of professor emerita.

Hockett was born Sept. 5, 1920, in Bronx, N.Y. She attended Hunter High School and Hunter College in New York city, where she earned her bachelor’s degree in mathematics in 1941. She was awarded a master’s degree in applied mathematics from the University of Michigan in Ann Arbor, Mich., in 1942.

Stephen Hilbert, a professor of mathematics who worked with Hockett, said Hockett always kept in mind the students’ point-of-view when teaching. He said her approach to teaching was distinct.

“She looked for different ways to teach,” Hilbert said. “I remember, about 30 years ago, she tried to use what they call a ‘goals approach.’ Instead of having a big test every five or six weeks, you had a test on one particular topic. You had to master that, and then you had to go through all the topics to complete the course.”

Hadley Smith, an assistant professor of writing at the college, was one of Hockett’s students from 1966 to 1968 when she taught at Ithaca High School. He said Hockett was a lively teacher.

“She would sometimes be writing with the chalk and get to the end of the board … and she just kept writing along on the wall,” Smith said. “She would do a lot of things like that to keep us engaged. She was a very animated, really good teacher in a tough area to keep 16 or 17 year olds engaged.”

Hockett was a supporter in the campaign to build the James J. Whalen Center for Music. The Hockett Family Recital Hall in the music school was named after Hockett and her husband Chas, who passed away in 2000. She then established the Charles F. Hockett Music Scholarship in memory of her husband.

Hockett was also a textbook author and a mother of five children. Rachel, one of Hockett’s daughters, said music played an important part in her mother’s life.

“There was a lot of music in our household,” Rachel said. “My dad was a very avid musician and composer. He always composed songs and chamber music. But my mother was not raised with music in her household.”

Rachel said her mother took up playing the clarinet at the age of 57 and continued playing for about 30 years. She said Hockett’s contributions to the music school stemmed from passions for students and music.

“Once she made some money from the books that she wrote, she wanted to give back,” Rachel said. “The fact that my parents were so generous to the music school was their way of saying thank you for acknowledging how important music has become in my mother’s life as she got older.”

Rachel said she remembered her mother as a warm and witty person.

“You couldn’t meet her without loving her,” Rachel said. “The cards and notes we are getting since she died are just unbelievable. She was so beloved, and she loved people.”

Marty Sternstein, a professor in the mathematics department who coauthored two books with Hockett, said she was an insightful author and a welcoming person. Sternstein met his then wife-to-be Faith while teaching in Liberia. After they were married, Sternstein said, Hockett, who was both a colleague and friend, welcomed his wife to the U.S.

“I got married in 1980, and when we came back to Ithaca, Shirley really took my wife Faith under her wing,” he said. “She was so nice to her and showed her around. My wife had never been to the states before.”

After her retirement, Hockett also donated to the college and would regularly attend events and concerts. Shelley Semmler, retired vice president of institutional advancement, said while Hockett’s relationship with the college changed after retiring, her passion further developed.

“But the intensity of her relationship with IC actually grew stronger and stronger over the years,” Semmler said.

A celebration of Hockett’s life will be held on April 12 in the Hockett Family Recital Hall.