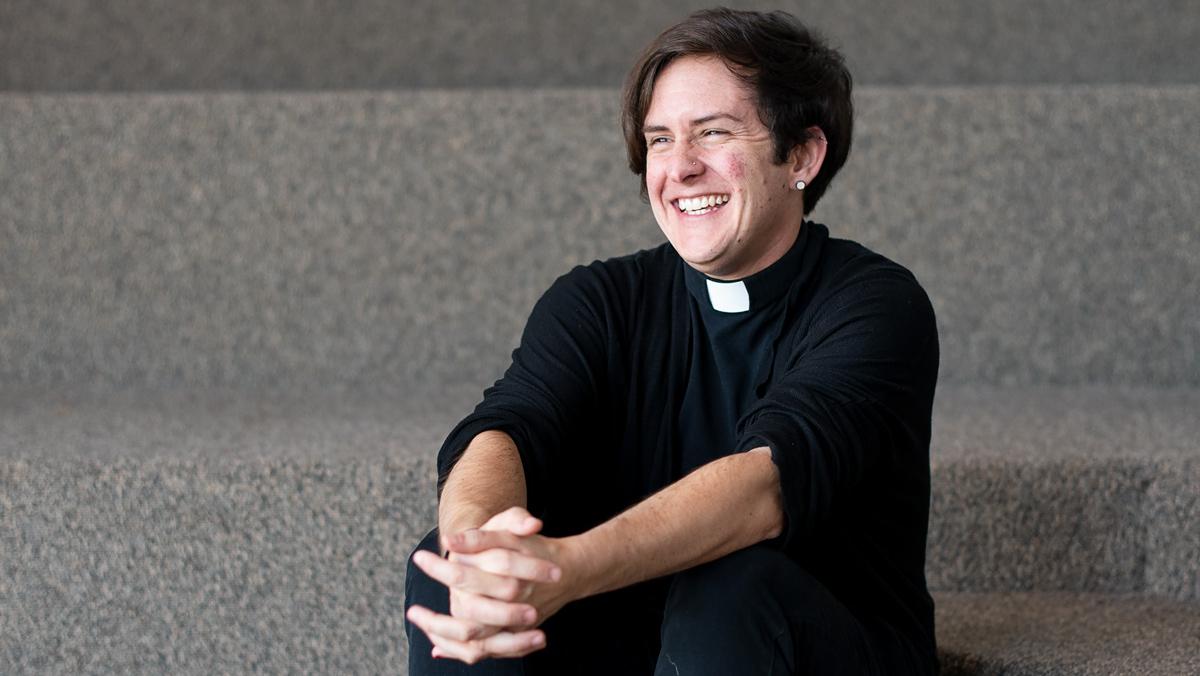 Kristen Harrison/The Ithacan
Reverend M. Barclay is an ordained deacon in The United Methodist Church and was brought to the college for a discussion series titled “The Sacred and the Strange: A Very Queer Spirituality.”
By Julie Dannevig — Staff Writer
Published: October 30, 2019

The Rev. M. Barclay discussed the acceptance and exploration of sexuality within spirituality at an open conversation for Ithaca College students and faculty Oct. 28.

Barclay is an ordained deacon in the United Methodist Church and was brought to the college to expand the conversations held on campus about identity and religion, said Hierald Osorto, director of religious and spiritual life.

Barclay spoke at a series of events between Oct. 27–28 in downtown Ithaca and at the college. At St. Paul’s United Methodist Church, Barclay served as a guest preacher and held a community lunch. At the college, they hosted a dinner and an open discussion.

“The strange you inhabit in your body, and whatever ways you give or receive love, or in your practices of living, in the parts of you few or no one else knows, do you know that whatever your strangeness is, that there is an invaluable gift in it?” Barclay said. “That the world, that the earth, that the collective needs it?”

Barclay discussed many facets of sexual identity and spoke about acceptance and empowerment.

“LGBTQIA people have been gifting the world with the offering of our strangeness, inviting others to learn from our shared wisdom around surviving the world’s hatred of our strange and finding deep delight and pleasure in our strange even when it’s hated,” they said.

Barclay had the audience members participate in a writing process in which they reflected upon their identities and their stranges. Barclay offered open-ended prompts like “the sacred strange in me…,” “Although destructive forces wish…” and “I am learning to…”.

An audience member asked Barclay how they continued to support Methodism when it seems as though it is against their identity as a transgender, nonbinary person. Barclay said they ultimately used religion to come to peace with their identity.

“Other people find healing by going back to the places that cause us harm and thinking about them and experiencing them differently, and, for me, that was really important,” Barclay said. “I don’t think I could’ve learned to love myself or deepen my spirituality if I didn’t find an approach in the same place that handed me these destructive narratives,” Barclay said.

Barclay discussed books that relate to spirituality and sexual identity, including titles like “Rainbow Theology” by Patrick Cheng and “Pleasure Activism” by Adrienne Maree Brown.

A student, who requested to be anonymous for personal reasons, said Barclay’s ministry is unique because it focuses on an inclusive and modern view of religion.

“What really struck me about their ministry is it’s not about going against scripture so much as it’s about incorporating it into a sense of identity that makes sense for you, and it doesn’t have to make sense for other people,” the student said.

Barclay said the event was inclusive of all religions and backgrounds.

Junior Jordan Szymanski said she believes that accepting and open discussions about spirituality are important to have on campus.

“Having a place to get into [religion] is super important because then it comes to be your choice instead of something that is forced on you or you’re forced out of,” Szymanski said.

Barclay said they were raised Methodist but also has experience with Catholicism, being nondenominational and attending a Presbyterian seminary. Another student, who requested to be anonymous due to the personal nature of the discussion, said Barclay’s vast experiences with different faiths added to their credibility.

“When [Barclay] discussed how they went through so many denominations, not many people actively choose to do that sort of thing, and so it’s inspiring to see that someone actively wants to do something better in the church,” the student said.