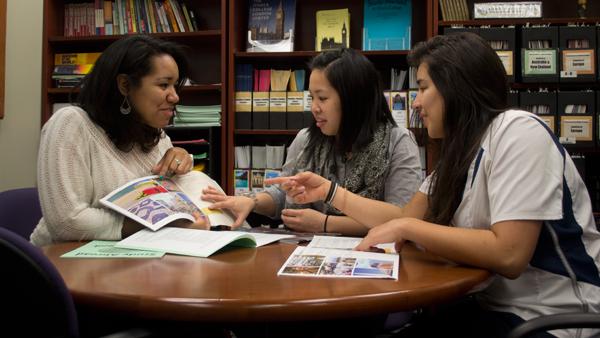 The recently revived Cultural Connections Club is working to keep cultural integration alive on campus for students interested in and returning from study abroad.

The club provides a meeting place for students who have studied abroad to share their experiences with other students who studied abroad or are interested in studying abroad. Ethnic food, foreign film screenings and discussions about culture shock, among other events, are planned for future meetings. Club leaders are also taking students’ suggestions for events.

Senior Jamie Hom, an IES Abroad ambassador and president of the club, said her conversations with another student in the IES study abroad program helped her prepare for her own study abroad experience.

“When you go abroad, you all have your own separate experience,” Hom said. “But it’s always interesting to know what are some of these people’s experiences. Our target audience will be people who have gone abroad, who are interested in going abroad or who are just interested in different cultures.”

Junior Marisa Silva, vice president of the Cultural Connections Club, said she enjoys being able to speak candidly about her experience. As helpful as the Office of International Programs is for students, it can’t answer the same questions that students returning from abroad can, Silva said.

“This is a great opportunity … for people who are interested in going, and they can hear the real deal of what it’s like, not just the fabricated, glossy brochure version of what it’s like,” Silva said. “It’s very different when you get there and you’re living it.”

Ever since the first rendition of the Cultural Connections Club in the early 2000s, the club has had a tendency to “die out,” Rachel Cullenen, director of study abroad and adviser to the club, said. Most of the club members and leaders were students who had studied abroad and therefore were typically juniors and seniors. As those students graduated, club membership would often drop, Cullenen said, but that never stopped students from reviving the club.

“I have been seeking students who would be interested in reviving [the club] for the last few semesters,” Cullenen said. “Every semester I send out a welcome back email to students who have been abroad the previous semester.”

Cullenen and Hom used Intercom, Facebook and listservs of students who had studied abroad to attract students. This year, they found success when about 15 students attended the opening event last Tuesday, Cullenen said.

“We will always reach out to all students who have been abroad to invite them to participate,” Cullenen said.

Silva said the discussion of study abroad experiences between students will help students who are interested in studying abroad be better prepared. Not everything on a study abroad trip can be planned for or explained in a brochure.

“Some people in my program didn’t like their experience,” Silva said. “That happens. Not everybody has the time of their life … but maybe if they had more information from other students of what [study abroad] was like, they would’ve thought about it more.”

Study abroad can be a life-changing experience, and the Cultural Connections Club wants to make sure students get as much advice from students who studied abroad in the form of personal recollections and cultural awareness events, Hom said.

“My study abroad experience [in China] definitely has changed or redefined how I see the world and my place within it, and my passions,” Hom said.