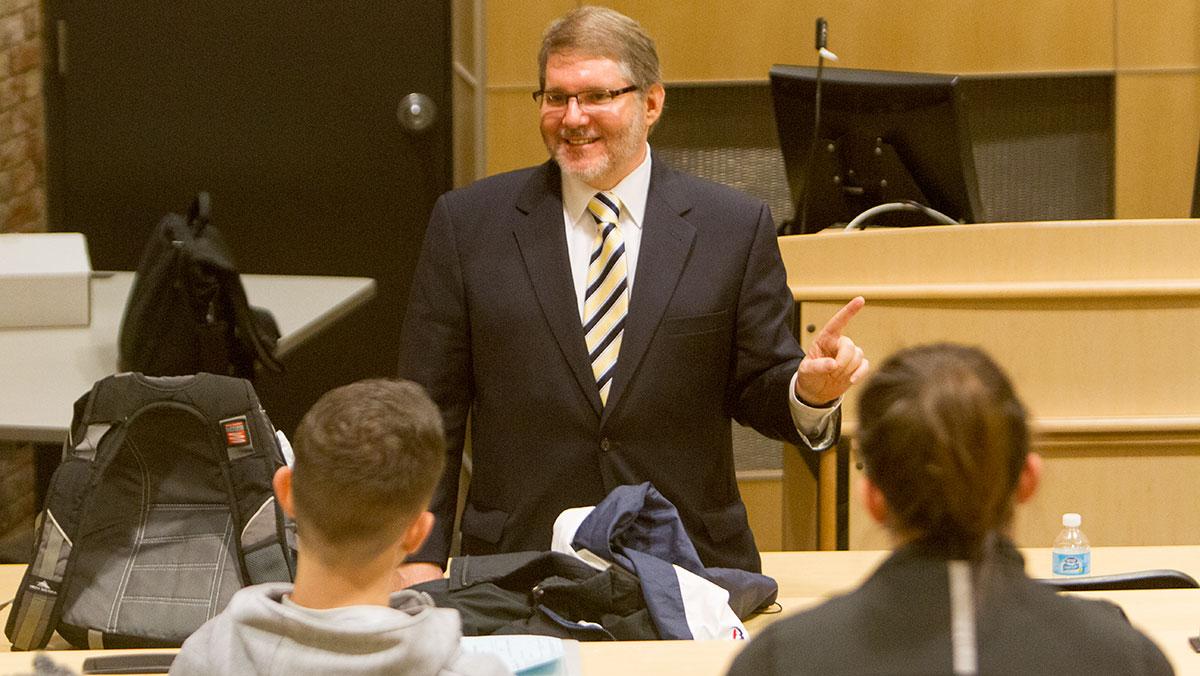 Jillian Flint/The Ithacan
Provost Ben Rifkin addresses student during his visit to campus as a finalist for the position in Dec. 2014. During this visit, he said diversity and inclusion were important topics to him.
By Aidan Quigley, Max Denning — Assistant News Editor and News Editor
Published: September 15, 2015

The Ithaca College provost has made an announcement addressing a number of Public Safety–related proposals recently put forward by President Tom Rochon.

Benjamin Rifkin, provost and vice president for educational affairs, sent an email to the college community Sept. 15 with information on the  the approval of the purchase of body cameras, the recommendation to hire an outside consulting company to conduct an external review of the Office of Public Safety and Emergency Management, the formation of a work group between the Public Safety and the Office of Residential Life and the announcement of the outside consulting firm to conduct the next campus-climate survey.

His email follows Rochon’s initial Sept. 6 announcement that came after a protest by resident assistants about alleged racial profiling on campus. This protest came after two comments made by Public Safety officers during RA training Aug. 18.

Rifkin said in his announcement that Rochon has given his approval to purchase body cameras for all Public Safety officers, but acknowledged that implementing the cameras will take time.

“We know that it will take time to design and implement a protocol for the use of body cams with regard to such issues as student privacy rights and archiving of the recordings, but I believe this technology—which is supported by students and officers alike—will be a valuable tool in providing transparency and building confidence in our Public Safety practices and procedures,” he said in his statement..

Dom Recckio, president of the Student Government Association, said students should have been involved in the decision-making relating to body cameras and the other initiatives.

“I just don’t think students were represented,” he said. “I represent students, and I didn’t get a seat at the table.”

The announcement also said Rochon has asked for an external party to conduct a review of Public Safety.

“President Rochon has requested that an external party be retained to conduct a review of the Office of Public Safety, both retrospectively in light of concerns expressed by students and for recommendations moving forward,” Rifkin said in his announcement. “Director and Chief of Public Safety Terri Stewart supports this review as a positive step toward helping build and maintain trust in this critical campus operation.”

Recckio said he would be working to make the external review and report as transparent as possible.

A Residential Life-Public Safety Workgroup will also be established by the college to improve relations between the two groups. The workgroup will consist of several professional and student staff from both offices, including managers, patrol officers, residence directors, RAs and Student Auxiliary Safety Patrol members.

“This Workgroup will help us find ways to improve collaboration between the two offices, in order to create a safer, more respectful, and more supportive environment for ALANA students and for all members of the campus community,” Rifkin said.

The provost also announced the college has finalized its contract with Rankin & Associates to develop and administer the next campus-climate survey. The announcement stated Rankin has worked with over 100 colleges, universities and other organizations to assess learning, working and living environments.

Roger Richardson, associate provost for diversity, inclusion and engagement; Michelle Rios-Dominguez, manager of diversity and inclusion in the Office of Human Resources; and Recckio interviewed three firms over the summer and unanimously recommended Rankin & Associates, the announcement said.

The announcement also mentioned the Council on Diversity and Inclusion and the creation of a Campus Community Review Board, which were both mentioned by Rochon in his Sept. 6 announcement following the RA protest.

Recckio said although he was happy there would be a place to report Public Safety concerns, students have been asking for a place on campus to report biases regarding microaggressions for years.

The Council on Diversity and Inclusion will be co-chaired by Belisa Gonzales, associate professor and director of the Center for the Study of Culture, Race and Ethnicity, and Linda Petrosino, dean of the School of Health Sciences and Human Performance, and will begin meeting this fall.

The Campus Community Review Board is designed to provide an avenue for students to report concerns and complaints about Public Safety. The announcement said the college would be looking at models from other colleges and universities to guide its efforts, and students will be provided an opportunity for input.

“By continuing to work together, we strive to make Ithaca College a better community for all,” Rifkin said. “If you have additional ideas or suggestions on how we can best accomplish this, please do not hesitate to send them directly to me at provost@ithaca.edu or to President Rochon at president@ithaca.edu.”