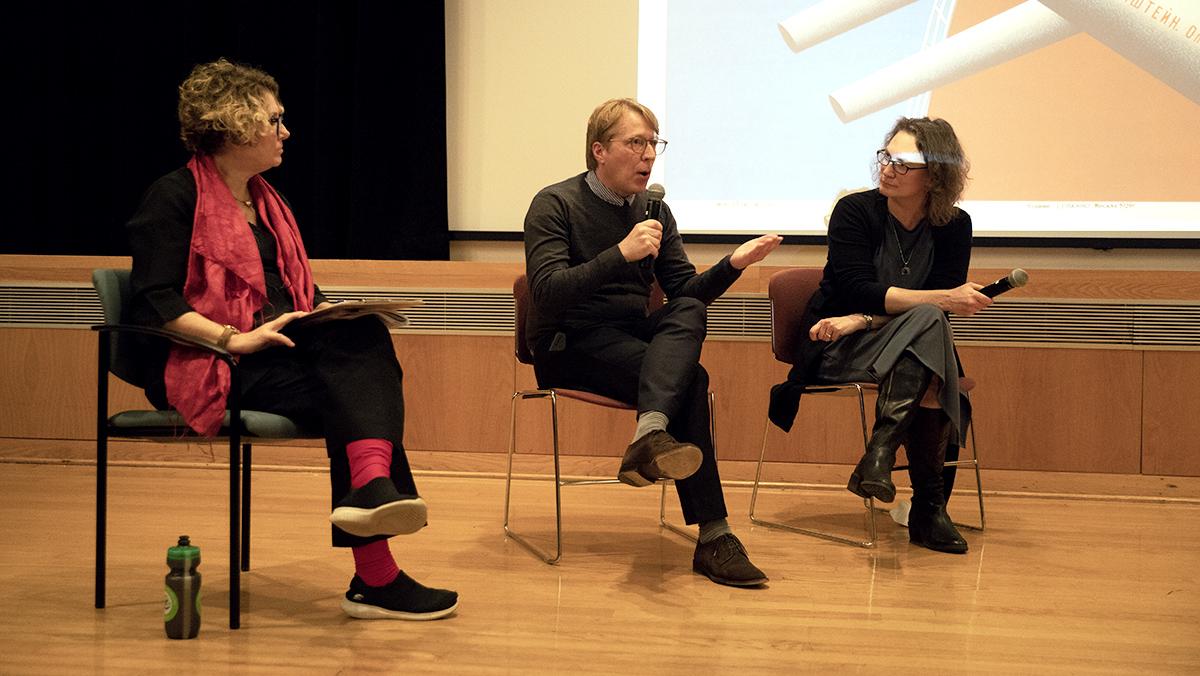 Four Ithaca College professors provided different perspectives on the film “Battleship Potemkin” during a roundtable event at 7:50 p.m. Oct. 31 in the Park Auditorium. The movie, directed by Sergei Eisenstein, was released in 1925 and is relevant to the ongoing war in Ukraine.

The film depicted the 1905 mutiny of sailors against their superiors on the Russian Battleship Potemkin and more broadly against the oppressive Russian czarist regime of the time. According to History.com the czar — the title for rulers of Russia prior to the revolution — engaged in catastrophic wars in the beginning of the 20th century, impoverished the nation and did little to help the large number of peasants and workers in the country. The 1905 uprising was the nation’s first large-scale rebellion and laid the foundations for the larger 1917 Russian revolution that was led by Vladimir Lenin and the Bolsheviks who were eventually victorious and established a communist state.

Zimmermann began by explaining the film’s relevance to the current war in Ukraine. She said the film was shot in the Ukrainian city of Odesa, while today Odesa is being targeted by Russia because it is a vital port for trade and transportation.

“If you Google Odesa now, you will see it is spelled with one ‘s’, the Ukrainian way, and you will see pictures of monuments in Odesa that are sandbagged and protected from Russian attack,” Zimmermann said.

Zimmermann asked the panelists about their thoughts on the film in relation to the war in Ukraine. Wasyliw said that similar to ordinary people rising up against the tsar in “Battleship Potemkin,” people involved in the current war in Ukraine have been mobilizing to help in any way they can to suppress Russian President Vladimir Putin and his forces. He mentioned Jose Andres, the founder of World Central Kitchen, which is one of the organizations distributing meals in Ukraine.

“People just come in and volunteer,” Wasyliw said. “They say if something gets snapped out, we’re going to build it back up because it’s, in a way, a direct confrontation with its new tsar.”

Zimmermann said the film is considered to be one of the most important films in cinema globally. She said the Soviet government supported this film in celebration of the 1905 rebellion and the peasants and workers who had recently won the Russian Civil War, which was between the revolutionary Bolsheviks and a mix of forces that supported the status quo.

“It visualized Eisenstein’s theories of montage, it focused on masses rather than individuals, it was censored in Germany for its class politics, it influenced Hollywood and is referenced in many other films and works of art around the globe,” Zimmermann said.

Utterson talked about the film’s use of Eisenstein’s theory of montage, which heavily emphasized the editing of different scenes together to create scenes that moved people. Utterson said he was impressed by Eisenstein’s theory and his ability to convey it on the screen.

“I was wowed by the command of montage,” Utterson said. “I was wowed as a film studies student, not so much focused on production, although that was part of my study too, but thinking about a filmmaker, in terms of theory and practice, who really lived it, who really embodied it, and to be able to see those ideas come alive, and to see the way in which the production of those films were further reflected on.”

Richardson said one of the main reasons the film was being scrutinized in Germany after its release there in 1926 was its depiction of class conflict, which could endanger the country’s public order. Richardson said that while the film was allowed to be screened in the country, it was edited for German audiences to hide certain scenes that were considered dangerous to the government.

“They were starting from a film [roll] that was about 1800 meters long, they already cut about 200 meters just to get it in the door and then cut another 200,” Richardson said. “By the end, you’re down to about 1100 meters out of an 1800 meter film. … You could see it just shrinking and shrinking as objections came in.”

Richardson said even though Germany was consistently cutting out parts of the film, its significance in the country was not going unnoticed.

“It was very popular,” Richardson said. “It was recognized as an artistic achievement. … The challenge in censoring a film like this is that the political intent is in the form as well as the content, so you can cut the brutal scenes, but you’re not really changing the politics of the film when you do that.”

Jolly talked about the film from her viewpoint as an art historian with a focus on Mexico. She said Mexico in the 1920s was the center for artistic revolutionary activity and there Eisenstein met David Alfaro Siqueiros, one of the most prominent Mexican muralists of his time. She said they both took inspiration from each other as seen in Eisenstein’s “Battleship Potemkin” and Siqueiros’ “Portrait of the Bourgeoisie.”

“We have scenes like this one from the Odesa steps where we’re looking at the soldiers shooting from below expressing their dominant position, our subordinate position, and then we have this view from above down to the folks who are being killed,” Jolly said. “Siqueiros is using these contrasting perspectives as well. So we view, for example, an aircraft carrier and a tank from below.”