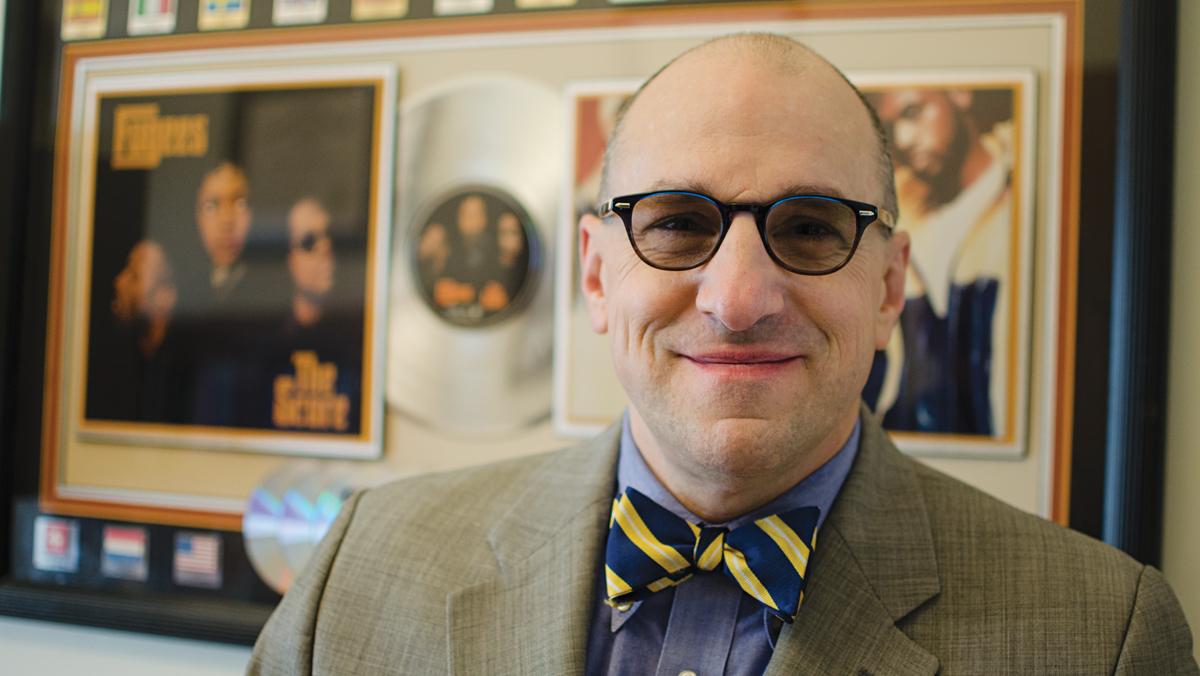 Kristen Harrison/ The Ithacan
Phil Blackman, assistant professor of accounting, presented the idea to create a Masters of Business Administration focusing on entertainment management when he arrived at the college 18 months ago. The MBA still needs approval from faculty before it can become a recognized program.
By Tessie Devlin — Staff Writer
Published: December 3, 2017

The School of Business, the Roy H. Park School of Communications and the School of Music are in the beginning stages of collaboratively developing a specialized Master of Business Administration program focusing on entertainment management.

Entertainment management combines business practices with the entertainment industry to teach students how to manage their interests, such as television shows or music composition. Phil Blackman, assistant professor of accounting, presented the idea for the program after he was hired 18 months ago to provide students with an opportunity to specialize in an area of interest.

The program is in the middle of the strategic planning process, but faculty approval within the business, communication and music schools is still needed for the program. The developers are seeking support this year as they propose the idea to faculty, Blackman said.

First, the program must be approved by the business school’s graduate curriculum committee, which is made up of faculty members. If the committee approves the program, it is then presented to the faculty senate curriculum committee for approval by the faculty at the college. The New York State Education Department must also approve of the program in order for it to begin, Blackman said via email. The goal is to start the first class by Fall 2019, Sean Reid, dean of the business school, said. Blackman said the program will combine the resources the different schools already have, like music performance facilities and the radio station, in an entrepreneurial manner.

Blackman said courses that would be offered in this program could include marketing, business and legal affairs, and management within the entertainment and media industries.

Reid said he believes the program will promote collaboration and interaction between the business school and professors and students from other schools at the college.

The college plans to invest approximately $3,500 in a market analysis, an assessment of programs at other colleges conducted by outside sources, to make the program stand out, Gerard Turbide, vice president for enrollment management, said via email. Diane Gayeski, dean of the Park School, said it is important that the program is attractive to incoming students and will aid their professional goals.

“We’ve already invested the money we need to do this program, and now it’s just putting all those pieces together and having someone giving the students the idea,” Blackman said.

Gayeski said students at the college are already getting offers from businesses outside of the school to further develop their entertainment–related ideas through interning and creating YouTube channels. However, students do not have the skills or infrastructure necessary to aid the process of receiving money for the ideas when they sell them to businesses, which the developing degree would be able to teach them, she said.

“The ability to have these kind of resources to help you market it, negotiate a contract or sell something or license it could be so worthwhile to students’ current finances and money in the bank,” Gayeski said.

Eddy Crowley, freshman music composition major, said he would like the opportunity to learn about the business side of creating and sharing music because it does not come as naturally to him. He said the additional year at the college would be less stressful than going through the process of applying to other graduate programs.

Claire Bailey, freshman writing and IMC double major, said the program would allow her to use public relations skills to build a relationship between a business and the public through marketing and advertising. She said it would also help her learn the entrepreneurial side of freelancing.

“Doing that is much less stressful than going to college for four years, then having to reapply to other schools for my master’s and going for like two, three more years,” she said.

Hannah Crisafulli, sophomore cinema and photography major, said she would be interested in the program because it would allow her to understand billing and marketing strategies involved with freelance photography.

“Making money as an artist is hard, and having an education on the business side of the industry could help everyone with the feeling like your entire future is living in your parents’ basement,” Crisafulli said.

Correction: The initial version of this story misrepresented the status of an MBA program in sports management. No such MBA program currently exists.

Sam Villanti ’86 returned to the Business School to speak with students about his experiences leading a business during times of change Tuesday night.

School of Business will be hosting the second annual Sustainability Case Competition in which students in small teams will develop a marketing plan for the New York Sustainability Education Working Group.