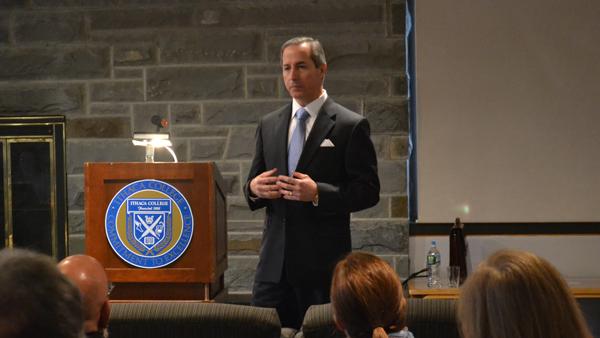 The college has narrowed its search for a new dean for the School of Music to three finalists, who will visit campus within the next two weeks.

The first finalist, Jamal Rossi, visited campus Monday and Tuesday, and the next two finalists will visit campus Feb. 4-5 and Feb. 6-7, according to John Sigg, associate dean of the School of Health Sciences and Human Performance and chair of the search committee. The names of the other finalists will be announced by the end of the week, Sigg said.

The search for a new dean for the School of Music began in August and is being facilitated by a committee of 12 to 14 people from across campus. The final hiring decision will be made by Marisa Kelly, provost and vice president for educational affairs, and Sigg said he expects the decision to be made soon.

Sigg said the search committee reduced the pool of applicants to three finalists in December.

The former dean of the School of Music, Gregory Woodward, left the college last summer to take up the post of president of Carthage College. The current interim dean is Craig Cummings, a professor of music theory, history and composition.

On Monday, Rossi spoke to about 25 people in Clark Lounge in Campus Center. He said he was concerned with the marginalization of music and the arts in public schools in the current economic climate.

Rossi said the new trend of public education in the country is focused on science, technology, engineering and mathematics, or STEM, and takes away from the arts.

“We have all seen throughout the country how, because of economic pressures and the emphasis on STEM, that arts have been marginalized and in many cases reduced or eliminated … it does not bode well for the future of what we have to do,” Rossi said.

Rossi said he hopes that children in the future have more opportunities to become involved with music so their communities will continue to care about music and support the arts.

“If a community does not care about what we do, we are going to fight a losing battle,” Rossi said. “And the only way the community cares is if they’re educated and understand. You can’t make somebody want something, but you have no hope of them wanting it if they aren’t exposed to it.”

Rossi said music plays an important role in society, and the School of Music, as well as schools across the country, need to find ways to involve the community in music and music education.

“The other role of the School of Music is to make certain that the rest of the community of the college has opportunities to engage with music,” Rossi said.

John White, associate professor of music theory, said he enjoyed the presentation and was impressed by how Rossi thought about each question.

During the informal question-and-answer session, Rossi answered the question of higher education value and investment and said part of the appeal of the college is the residential community, versus online learning.

“I believe music is a transformational experience; music plays a critical role in all of our lives. For many of us, it’s classical music or some form of that, but look at the biggest societal change in the last 20 years — who on campus isn’t walking around with a pair of white earbuds? They’re not listening to NPR or Rush Limbaugh, they’re listening to music; this matters to them,” Rossi said.