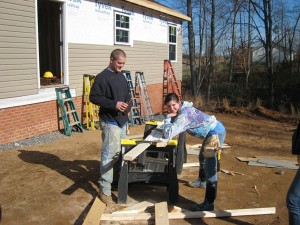 From left, senior Trevor Wolf and sophomore Marissa Fulton help cut the siding for a home in Statesville, N.C. Thirteen students from Habitat for Humanity at Ithaca College visited over winter break to help rebuild homes. Courtesy of Theresa Ibarra

In an effort to eliminate impoverished housing, 13 students from the Ithaca College Habitat for Humanity chapter collaborated to build a 1,100-square-foot home in Statesville, N.C., for a single mother and her two daughters.

Of a population of more than 20,000, 16.1 percent of those residents are poverty stricken, according to the latest United States Census Bureau.

Due to the low income they are receiving, many people who live in Statesville cannot afford homes to support their needs. They have no alternative but to purchase substandard housing.

The trip, led by sophomore Kelly Parker and senior Elizabeth Boyce, was a part of the Collegiate Challenge, an initiative through HFH International that invites groups of students to spend one week during school break at an affiliate within the United States.

The HFH of Iredell County in North Carolina hosted the challenge.

The group met in Ithaca on Jan. 14 at senior Kyle Sweazey’s house and set out on an 11-hour trip to North Carolina.

Sweazey said the ride consumed a day’s work, as the group did not reach the site until later that night. The group stayed at the First Baptist Church and took showers at a nearby YMCA facility. Meals and transportation were covered through the $250 deposit paid by the participants.

Scott Loudermelt, executive director of HFH of Iredell County, said the organization has been involved in the challenge for about 15 years and has recently expanded its program to include outside groups.

“This year we had, or we will have, nine colleges and a total of 132 students,” Loudermelt said. “We use them for new constructions, renovations and repairs for existing homes.”

Construction of the house began Jan. 2 with the previous week of volunteers. With most of the framing and foundation finished, students from the college installed windows, roofs and doors from Jan. 14 through Jan. 21. They also worked on putting up the vinyl siding of the home.

Loudermelt said all homeowners must earn their home and be capable of sustaining them with a steady job income. The organization does a credit check and a job history check, and homeowners are required to complete 50 hours of volunteer work on someone else’s home.

Smith’s home is the 69th house built through the HFH of Iredell County and is expected to be completed in April.

For Loudermelt and the HFH of Iredell County, this is one home closer to the goal of eliminating inadequate housing in Statesville.

Parker, who is also treasurer for HFH at the college, said the experience was humbling and found it gratifying to see the impact the house has already made.

Parker said Smith and her two daughters will be moving from a one-bedroom apartment to this home, which has three bedrooms and two bathrooms.

Parker said since she has been a participant in HFH programs since the fifth grade, the reactions of Smith’s daughters served as a reminder as to why she continues to be a part of HFH.

“I’m giving back because if I were in the same situation, I would hope that others would be giving back to me,” she said.

Loudermelt said the HFH of Iredell County would invite the HFH chapter at the college back for another challenge.

Jenny Pickett, adviser for the HFH chapter at the college and coordinator for residential facilities, said a trip to do similar work in Washington, D.C., is set.
Pickett said the Collegiate Challenge tends to be the highlight of many of the group members’ building experiences.

“One of the biggest goals with Habitat is to give students an opportunity to do service and become involved in a larger community,” Pickett said.

For Parker, the friends she makes on these trips and the bonds formed through the spirit of giving instilled a sense of motivation and dedication to the work and people of HFH.

“It’s just so surprising that friends come together to help out,” Parker said. “It’s awesome just to share the wealth and share the joy of giving back and helping.”